Mobility no longer simply refers to motion, it has also come to describe the untethered use of technology on devices like smart phones, both of which seems to have come together in a perfect storm to enable the revolutions currently sweeping the Middle East and North Africa. Setting these revolutions in motion, is the youth, who organise and spread their message using social networks primarily accessed through mobile devices. These platforms are not only changing how young consumers engage with politics but also with commerce and one another. 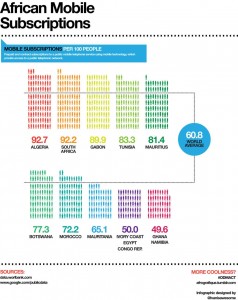 In South Africa research by consultancy World Wide Worx suggest younger consumers are more likely to spend a greater percentage of their mobile expenditure on non-voice services, particularly data services. For 16-18 year olds as much as 29% of their spend goes towards non-voice while the figure stands at 16% for 19-24 year olds. The research found that data as a percentage of total mobile spend has grown from 5%-8% in 2010. Expect further growth in the future.

World Wide Worx MD Arthur Goldstuck says 39% of urban South Africans and 27% of rural users are now browsing the Internet on their phones which means at least six million South Africans have Internet access on their phones. MXit (with 24% of that audience) and Facebook (with 22%) are the two most popular mobile sites in the country according to Goldstuck while Twitter is showing good growth. Social media is quickly transforming levels of social engagement and is helping drive what is becoming known as the ‘referral economy’ where consumers base purchasing decisions on advice from their social circles.

Popular mobile browser Opera Mini has also released statistics on its user bas which indicates that during 2010 the top 10 countries African countries using its popular browser were South Africa, Nigeria, Egypt, Kenya, Ghana, Sudan, Libya, Tanzania, Zimbabwe and Namibia. During the course of the year page views in these countries increased by 365%, unique users increased by 176% and data transferred increased by 331%. In 6 out of the top 10 countries social network Facebook was the most visited site. Echoing Goldstuck’s research Opera Mini has MXit and Facebook in its top three mobile sites for South Africans with YouTube at number four and Twitter at number 10.

On Device Research meanwhile found that, based on research from a number of countries, more than 50% of users in Africa use mobile as the sole access device to the Internet. In Egypt this jumps to 70% of users while in South Africa its 57%. The researchers already predict that the “mobile only’ internet generation is a billion users strong – and in developing economies 70% of them are under the age of 25 while 52% of mobile browsers engage in social networking (downloading games and music come in an 55% and 54% respectively).

As for the hardware (the actual phone) itself Nielsen’s whitepaper ‘Mobile Youth Around the World’ found that 84% young people with mobile phones chose their own device. While Nielsen found that in many emerging economies price as the first purchase driver for people aged 15-24 Synovate found that in SA users aged 18 – 34 were most concerned about the image and functionality of their handsets. Local research found most South Africans (88%) prefer pre-paid packages – often to avoid big overuse charges – while 72% of pre-paid customers believe these packages are cheaper than contracts.

Last year Synovate found that 91% of those in the 25 – 34 year old age group declared that they could not live without their cell phones, followed closely by 87% in the 16 – 24 age category.

Nielsen come to the interesting conclusion that a reverse innovation model is evolving, “where effective mobile advertising platforms are identified first in emerging markets, then transferred back for further refinement in established markets. The implications of the disruptive growth associated with mobile technology in emerging markets also should readily transfer to other industry sectors.” For example it expects innovation in services like mobile banking to be driven by emerging markets.

Goldstuck’s research shows that 37% of South Africans in urban and rural areas aged 16 and above now use cellphone banking, and that cellphone banking usage peaks in the 26-34 age group, at 41%, and drops to 11% in the over-45 group. It’s a younger audience driving adaption of new mobile innovations. MXit earlier this year signed as agreement with wiWallet offering MXit’s 10-million active users access mobile payment services.

As the youth market (now worth R95 billion) increases it use of mobile phones to talk, shop, bank, listen to music, play games, watch movies and make clear their political agenda, the forward motion of mobile innovation is bound to increase dramatically. And the youth will lead it.

An edited version of this article first appeared in the 2011 edition of Tony Koenderman’s AdReview (a FinWeek annual). The fantastic infographic copyright Afrographique.