[Netprophet 2011] African ecommerce market has a long way to go

A billion Africans and 50 million bank accounts. In South Africa, credit cards are used by only 16.5% of the population (2008). No African country comes close to 1% of total retail spend spent online – the magic figure which constitutes the tipping point for digital retail growth (in SA, ecommerce has a 0.4% share of the retail market, while in countries such as Egypt and Nigeria, the figure stands at 0.01%). No wonder, then, that the ecommerce market in Africa hasn’t bloomed.

Looking at these numbers, many international ecommerce plays have shifted investment in the African market 5-10 years down the line. But where others fear to tread Oliver Rippel, CEO ecommerce Africa & Middle East at MIH, sees opportunity and first-mover advantage.

MIH has an ecommerce footprint in a number of African economies, starting in SA and gradually working its north. It is already investing in Senegal, Cote d’Ivoire, Ghana, Cameroon, the DRC and Nigeria, among others. Its brands include Kalahari.net, Mocality, PriceCheck, Careers24, Payu and Dealfish.

Speaking at the 2011 NetProphet conference on Thursday, 12 May 2011, in Cape Town, Rippel said he sees a number of positive macro-economic indicators warranting investment in the African online retail market.

For one, the continent is experiencing real GDP growth at a time that many developed economies are experiencing varying levels of stagnation and contraction. This translates into a growing middle class – now estimated at 350 million Africans – up from 135 million in people in 1990 and 200 million in 2000.

His sense of optimism seems to be borne out by research released by Arthur Goldstuck, MD at research firm World Wide Worx, via a tweeted presentation at NetProphet.

Goldstuck’s research reveals that, for the past five years, SA experienced 30-35% growth in SA online retail every year and that for 2010, total online retail sales in SA passed the R2 billion mark to reach R2.028 billion (the ‘physical’ bricks and mortar retail market was valued at R561 billion in 2010). This year should see online retail hit the R2.6 – R2.8 billion mark, translating into a growth rate of 40%.

High mobile phone penetration (and a shift in focus to data by the cell service providers that is gathering steam) is another reason Rippel believes the market requires investment by early movers.

SA stands at 92.2 phones per 100 people and the figures are similar in a number of other African markets. Gabon has 89.9 phones per 100 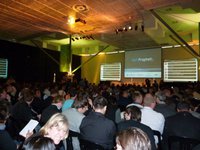 people and in Algeria the figure stands at 92.7 per 100. Couple that with new undersea broadband cables now connecting to Africa and it becomes clear that we are bound to see a more digitally familiar audience migrating to ecommerce.

Finally, entrepreneurs are having an easier time with doing business in Africa, which in turn helps stimulate innovation and new ventures.

Rippel says success in the digital retail space depends on a number of key factors, including embracing mobile, leveraging offline environments, factoring in that in Africa cash is still king and building a trust relationship with consumers.

According to Rippel, MIH’s Mocality service aims to serve as a “Yellow Pages for the masses” by expanding mobile location services to the informal market. Mocality’s reps go into public spaces where people rely on message boards (ie where the customers are) and contact posters directly – the hope being they would be willing to migrate their ads to its mobile service.

Credit card penetration remains low in Africa – remember the ‘one billion people with 50 million bank accounts between them’ stat – meaning 95% rely on cash-based transactions. This has lead to the success of M-PESA in the Kenyan market – it offers a mobile solution that allows people to transfer cash from the city to relatives in the countryside.

People now use M-PESA accounts for real world commerce and it is starting to translate into ecommerce as well. Vodacom and Nedbank recently announced the introduction of M-PESA into the local SA market.