Ogilvy Cape Town is making a tangible move towards integrating digital skills companywide and across traditional agency silos as ad spend continues its shift online. The agency has rolled out a comprehensive educational initiative with lecturer and digital strategist Dave Duarte, who joins the company to lead its Ogilvy Digital Marketing Academy (ODMA). 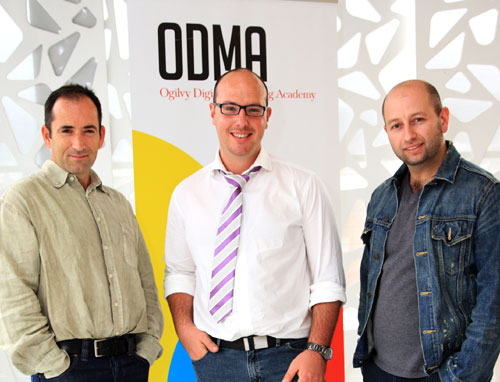 Duarte initially developed the ODMA course modules for Ogilvy but now joins on a more permanent basis to expand the course nationally to Ogilvy in Johannesburg and Durban. He retains an independent relationship with educational institutions such as UCT’s Graduate School of Business.

The ODMA initiative aims to transform the company culture at Ogilvy by ensuring staff across the board receive substantive and practical skills in working in the digital economy and to remove any stigma around technology for staff and clients alike.

Seven three-hour workshops across seven weeks train around 25 staffers at a time in concepts such as the Attention Economy, social media, analytics, search engine optimisation (SEO), online advertising and media buying, user experience (UX) design, video, game design and motivation architecture, mobile and transmedia storytelling. Students work on personal and team projects throughout the course and finally present their projects and what they have learned to fellow course members.

Students range from client service to art direction and PR; each student group represents a mixed bag of experience, seniority and skill. At the end of the course, they confidently talk about memes, influencers and prototyping to explain ideas to clients.

One study member, Justin Sheard, created a blog where friends (and eventually fans) can vote between songs to help determine his band’s sound, while Ivan Colic’s infographic site Afrographique has drawn international attention.

Mainly, the ODMA serves to instil confidence in agency employees around digital media. This will help create an environment no longer bound by the constraints of ‘traditional’ advertising and will allow staff to confidently engage with one another, but also with clients, in conversations on digital.

Duarte says this South African agency is setting the precedent for Ogilvy worldwide, with interest and enquiries on the ODMA streaming in from Japan, the US and the UK, among others. To cater to these requests, course material will be made available online under a Creative Commons licence.

In Duarte’s experience, it’s the first time a company’s senior managers have been this intimately involved in creating an in-depth partnership with the training profession, and to ensure that the course goes well beyond simply ‘tipping the hat’ to digital.

Duarte promises ‘up-skilling’ will be continued through to master classes as students reveal new insight into their core interests and talent, and jokes that Ogilvy is driving the “geekification of the ad industry” with this latest initiative.

Gavin Levinsohn, MD of Ogilvy Cape Town, describes the ODMA as the agency’s most important initiative since he took the reins in 2008. The course is already impacting on the agency environment, with staff increasingly viewing technology less as a threat and more as an opportunity.

According to Levinsohn the agency had taken its eye off the educational ball during and immediately after the Great Recession but the ODMA signals its recommitment to the transformational power of learning. Levinsohn says the ODMA is already impacting on the employee relationships by creating internal awareness around employee skill sets.

Rob Hill, group managing partner of Ogilvy South Africa, says the ODMA aims to go beyond functional training to also excite staff members about the impact and potential of digital to transform their industry.

Change cannot be confined to pockets within the group, says Hill; it needs to be universal and extend to client side as well (the course is open to Ogilvy clients). Hill also believes the ODMA has already had an impact on the work the agency produces – calling it “much more digitally nuanced”.

According to Hill, the traditional division of labour within the agency is also decaying because of digital. Hill foresees a less hierarchical industry but admits this is still a process in motion. Hill also defends traditional agency component processes, saying operationally agencies continue to require specialist skills.

Levinsohn argues the term ‘integrated’ has been misused to disguise lack of skill, while Hill argues that digital, for now at least, changes the agency approach to strategy, rather than structure.

Around 12% of Ogilvy Cape Town’s revenue currently comes from digital, well below the average of international agency groups, but this is changing rapidly, according to Levinsohn. The direction and velocity are pointing only one way and the agency is seeing this on a brief by brief basis.

Alongside the ODMA initiative, Ogilvy has also revised its social media policy, acknowledging that no one can expect staff to integrate digital into their work lives without access to these services. It’s also been investing in stand-alone digital businesses, such as Ogilvy Interactive and Neo@Ogilvy.

Having witnessed the skill level of students in the final class of the current course, it is undeniable that their views on digital in particular and technology in general have fundamentally altered. Even though the agency itself has not shed traditional structures, it seems clear that a new agency is emerging, and while the top brass gave the initial kick-start, it’s the students of the ODMA that will drive change at the agency in the future.