by Luca Gallarelli (@Gallarelli) As agencies, we’re in the relationships game. When that complex web is most effective, it can generate incredible work that is creatively and commercially fulfilling. But at the core of this relationship is trust.

Most agencies are founded on a set of relationships between our people, our suppliers and other agencies in and outside of our network. We employ that network to serve our clients, in order to improve their relationships with their customers and stakeholders. A set of sincere, honest and authentic interpersonal relationships powers the work. People understand each other; they communicate honestly and openly; and they believe in each other’s ability to deliver work that achieves its goals.

Clients entrust agencies with their brands — something precious, often built up over decades. Agencies are given custodianship of campaigns that will shape the fortunes of entire companies, and the futures of thousands of people.

We dare not take this responsibility lightly. At the same time, we need to think creatively, to stimulate new ways of thinking that will take brands forward. We do this by analysing brands at the deepest level we can, and by bonding with our clients until we start to share their passion and understanding. Then we start to apply our own expertise in coming up with ways to grow and enhance these brands.

Here is where it gets interesting. Disruptive, blue-sky ideas are amazing. Fresh, unique solutions can give brands new energy and boost the bottom line. Purpose-driven campaigns that reframe the narrative can be a force for social change. But for the client to buy into them requires trust.

This is where the oft-overlooked “soft skills” come into play. Agencies need individuals with the emotional intelligence to build those crucial relationships upon which business collaborations are built.

It’s about more than having the hard skills to brainstorm killer ideas, and implement them strategically across the appropriate channel. The sensitive brand-communications professional will know that we need to first build up the emotional equity with our clients before we can start encouraging them to make radical changes, to allow them to be brave enough to make the calls that can really shoot the lights out.

One of the most-intense client/agency relationships was that between Steve Jobs of Apple and the Chiat/Day agency, which created the tremendously brave and now iconic “1984” ad for the company during its early growth phase in the 1980s. Jobs fell out of favour at Apple, and left the company. However, his trust in Chiat/Day as the right custodian for the brand never waned. Even after Apple moved its account, Jobs took out a full-page newspaper ad, proclaiming: “The personal computer industry is now being handed over from the ‘builders’ to the ‘caretakers.’”

Such was Jobs’ trust in Chiat/Day that a decade later, when he returned to Apple, he rekindled the relationship. The result was the iconic “Think Different” campaign, which shot Apple into the stratosphere and now stands as arguably the greatest tech company of our era.

It was the deep understanding — the trust between Jobs, Jay Chiat and the team at Chiat/Day — that shaped this brand-communications success story.

Another example of trust helping to redefine a brand is the relationship between Nike founder, Phil Knight, and Dan Wieden from Wieden + Kennedy. When the two first met, Knight proclaimed that he didn’t really like advertising. Wieden subsequently won him over with his creative intensity, and incredible ideas. At short notice, after previous ideas tested badly and the agency needed a line to pull a campaign together, Wieden came up with the “Just do it” line and thus was born one of the most-powerful platforms in branding history.

The campaign transcended sport, and catapulted Nike into the realm of universal values like motivation, self-belief and personal achievement. The campaign grew Nike’s sales from US$877 million to US$9.2bn in ten years.

It was trust that led Nike to go with the W+K idea, and trust that underpinned that decade-long period of spectacular growth. That’s another thing: nothing boosts trust like results!

Both of these iconic success stories, Apple and Nike, have been built on a bedrock of belief, trust, and bravery that only a rock-solid relationship can deliver. Trust — true, sincere, courageous belief in each other — can free us to achieve things we might otherwise never have dreamed possible.

It’s an interesting lens through which to view work in the marketing and communications space. Many of us have built up impressive arsenals of skills and capabilities, which we can apply in service of our clients and their brands. But, in order to do that in a way that unlocks the truest and fullest potential, we must first win trust. 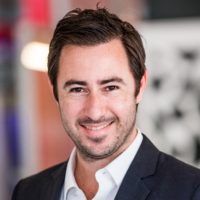 Luca Gallarelli (@Gallarelli) has been managing director of the Ogilvy Group (South Africa) since July 2018.