The geeks have the floor

Not that anybody noticed; we’d had to turn to Twitter to find out what he thought, so noisy was the small and crowded venue.

Packett couldn’t resist another barb at the awards evening crowd, tweeting, “‘How To Be A #Bookmarks2011 Attendee: 1- Be quiet. 2- Listen. 3- Applaud winners.’ Now you try.”

They didn’t. But we will get to that later.

MCs Simon Dingle (@simondingle) and Anele Mdoda (@anele) (from 5FM) were smart and capable, engaging the crowd and often joining in 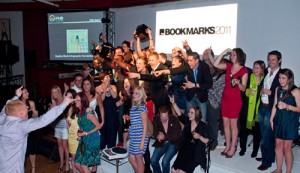 Quirk celebrates its Best in Show at the 2011 Bookmarks.

the general rebelliousness that is one of the more endearing traits of geekdom, while joking about the buzz of on-going conversation that competed with the sound system.

Like last year the event, which lasted nearly four hours from arrival till the end of the award ceremony (I skipped the after party), was mostly standing room only, or translated for the rest of us, ideal for networking, flirting, exchanging blog URLs and, quite likely, putting some last minute deals to bed.

Entries were up to 453 this year, from 120 entries at its launch in 2008, 229 in 2009 and 400 in 2010. The event cost roughly a R1 million with FNB stepping forward as the main sponsor. It was also encouraging to see an agency such as M&C Saatchi Abel stepping forth to engage with the digital industry as a sponsor this year.

In total, 95 awards were handed out in a rather exhausting 38 sub-categories (a handful more saw no awards being given out or receiving no finalists). It’s not quite a one-in-four award/entry ratio, but it’s close.

The agency crowd finally got some Gold Pixels handed out, unlike last year, when not one was given to anybody but publishers.

Ogilvy Interactive Cape Town grabbed the first for its VW Golf R Campaign in the Display Advertising sub-category. Social Code won Gold for its paid search campaign for ORMS Direct, as did DigiVOX for BMW. Synergize Online scooped Gold in the Organic Search Campaign category for Cash Crusaders. In Email Marketing, Quirk took Gold for its infographic newsletter for Capitec Bank, which would go on to also take ‘Best in Show.’

Ogilvy Interactive Cape Town seemed to take an endless stream of Bronzes and Silvers, as well as its three Golds, but didn’t get the Best Agency nod, which went to Quirk.

Prezence Digital did dominate the mobile categories but here the judges also stuck to handing out Bronzes and Silvers. Gloo popped up for a respectable two Bronzes (one shared with FoxP2), a Silver and the Gold it won with Pixel Project. HelloComputer won the Grand Prix for its Musica Flo browser at the Loeries this year but the same campaign only resulted in Bronzes and Silvers for them at the Bookmarks. Native grabbed two Bronzes and a Silver.

Quirk won its Gold for Capitec and a Silver for its Quirk Education Videos entry in the Pod/Videocasts category but only came into its own in the final half hour of the ceremony, when Andre Britz won Best Media Planner and Sarah Manners (@sarahmanners) won Best Copywriter/Content Writer for the agency. Of course, it then also walked away with Best Agency and Best on Show.

Publishers didn’t do as well as last year in the award stakes, with no Golds being handed out, but as with last year, Naspers-controlled companies dominated this section of the award categories – 24.com and other Media24 associates such as New Media and DStv Online.

The Bookmarks 2011 felt very much like a Cape Town affair and needs to broaden its support base and influence outside this city and the Western Cape. It also needs to be careful not to be overly ambitious in the number of sub-categories it gives awards out in, especially when those categories often only produce one or two finalists.

A bit of consolidation is in order, with fewer categories and more finalists per category, and this would also resolve the finalists-but-no-awards-in-certain-categories dilemma. If organisers want to reduce the noise levels inside the venue, a standing room mostly (it’s not quite only) event doesn’t lend itself to this; sit people down, or make your peace.

The geeks owned the floor last night, literally, and overall it was a happy affair. Credit goes to the organisers for learning some hard lessons last year and to the MCs for endearing themselves to the crowd.

Finally, to Bookmarks chairperson Nikki Cockcroft (@nikkicockcroft), who lead me to the chair right in front of the podium and the booming sound system, so as to ensure no stupid green strobe lights or bobbing heads obstructed my view, and that I heard every word (and then some) of what was being said: apologies for sneaking to back of the room during the second half of the event. The buzz was hard to resist. And I had some URLs to give out.

For all the full list of winners in table format, go to Digital excellence recognised as the winners of the 2011 Bookmarks (powered by FNB) are announced.