Brianna Graves has set out to discover the true state of global advertising by packing her bags, taking her savings, and getting on a plane. Travelling to six top ad agencies in six countries, including so far South Africa (where she spent a month with Hunts at its Jozi, Cape Town and Durban offices) and Canada (where she joined TAXI), Graves is documenting her experiences online at The Saturn Return Project. 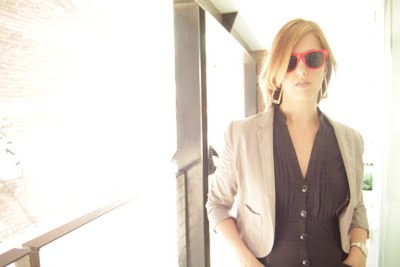 Combining a love for travel and adventure with a curiosity into how advertising and marketing is evolving across the globe, Graves is establishing an informal global network of ad execs sharing insights into global best practice and their local markets. @marklives caught up with her during the final couple of days of her stay in Canada on behalf of BizCommunity.

@marklives: You took on this project, which is quite substantial, and committed yourself to traveling to six countries and agencies to find out what makes creative agencies tick in this time of industry wide change. What drives you to do this, how are you financing it and how much work went into it before you headed off to your first destination?
Brianna Graves: I sat down one day last fall and thought about what I love most and what makes me feel most alive. There were three things: advertising, travel and writing. The idea for The Saturn Return Project grew out of that acknowledgement.

To dig a little deeper, I was (and continue to be) curious about how agencies across the world compete on the same global stage, given all of the shifting underfoot, and the evolution in the digital space.

From the moment I thought of the idea, there was no turning back, but it took about six months to pull together an unyielding list of details. There is one person on my staff (me), so if she doesn’t do it, it doesn’t get done and thus, she stays very busy.

And the answer to the million-dollar question is I am funding the project with every last penny of my hard-earned life savings.

@marklives: Did you have any preconceptions about the South African agency market that got turned on its head?
Graves: Not necessarily turned on its head, but placed into context. Someone could explain to me from afar the challenges of marketing and advertising in a country with such economic disparity and such diversity of language and culture. But there are no words that can compare to seeing something with your own eyes, or experiencing what I was able to experience in the month I visited.

@marklives: What key industry insights did you glean from you stay in South Africa?
Graves: Those who remained in South Africa over the past 17 years (as opposed to relocating to London or other advertising hotspots) are very invested in the growth and prosperity of the country. They’ve worked hard to get the industry to where it stands today and they are ready for, and deserving of, what’s coming next. The “Big Ideas” and creativity are there. So is a drive to represent SA well on the global stage. Pairing “the Big Idea” with that SA drive creates incredibly impressive results.

For instance, who in the United States is going to climb up and wallpaper a billboard with worthless Zimbabwean money to communicate an important message?

When that kind of passion collides with technological capability two years down the road, it’s going to be phenomenal in ways that we can’t anticipate now, and I think the rest of the world is going to sit back when that happens and just say, “Wow.” SA is prepared to catapult through the next five years and I’m really excited to see that.

@marklives: As somebody from the outside looking in, how divergent do you think are the Cape Town and Johannesburg agencies scenes from one another?
Graves: They were very different, and in fact, the way that individuals in both cities described themselves and each other was true to the way I experienced them.

There was a fast-paced hum of energy in Johannesburg and a lot of excitement around The Saturn Return Project and what I am doing. People were very forward in reaching out to connect with me, and I had some really inspiring conversations about the industry with professionals based in Joburg.

Cape Town was much more laid-back and easy-going, both in and out of the office, and had a very optimistic creative vibe throughout the city. I connected with fewer folks in Cape Town, but I had very valuable and meaningful conversations with those I did meet.

@marklives: Do you find that the big agencies here understand the extent to which digital (and specifically mobile) is changing people’s behaviour or do they find it hard to look past their love of TV?
Graves: The big agencies absolutely understand the impact of digital and mobile, both in SA and worldwide. The problem is that the infrastructure is not currently in place to support digital initiatives to their full potential. Nor is the audience.

When you can reach at least 75% of your population via television, at least from an awareness perspective, TV is not going to lose its place in the budget or media plan any time soon. Likewise, when so little of your population is online and even fewer trust the space enough to engage, you aren’t going to throw a large portion of your budget online.

It’s a bit of chicken and egg conundrum: people need to engage for brands to put money behind the medium, but brands need to provide value and compelling reasons for people to engage in the digital space. As the infrastructure improves, so will the initiatives that leverage it.

Likewise with mobile. If projections are true, and smartphone penetration in SA reaches 80% just three years from now, you’re going to see a different level of innovation and engagement than you ever have. Mobile penetration may be greater than 100% at present, but there’s only so much you can do with SMS and MXit.

@marklives: Did you find that SA agencies are quite aware of their own brands or is this something that seems to have fallen to the wayside?
Graves: I can only speak for those I was fortunate enough to interact with, and on their behalf, I’d say, yes, they are aware of their own brands. I’d also wager that across the world the last thing an agency is able to think about is [its] own brand. Client work and pitching new business always come first.

It’s nice when an agency has specific personnel in place to tend to their own brand, but it’s not always realistic. It doesn’t mean it’s forgotten or that they are unaware; it means they have bills to pay.

@marklives: You had an interesting post on the impact safety and (physical) security has on the kind of work we produce. As an observer, how you think it impacts on the work produced in SA?
Graves: It makes the work in SA simultaneously more practical and more risqué. As Damon Stapleton said to me, “In places like Africa, a lot of people have problems to solve. And when you have problems to solve, you’ve got to be smart.”

It’s true. If the basics of daily life force you to be innovative, you’re already operating on a different level than someone whose everyday life is comfortable and challenge-free in comparison.

That’s not to say you need to be concerned about your personal safety on a daily basis in order to produce great advertising. It is to say that the work in SA uses simple but unorthodox solutions to address real social problems and client issues with great results.

@marklives: TBWA\Hunt\Lascaris vs TAXI – what do they have in common and where do they diverge?
Graves: Both agencies share a deep passion for the industry and an understanding that no matter the new medium, the change or the evolution, the basic tenets of advertising still must apply. They share a precedence of internationally-recognised great work and a position as leaders within their own markets.

All roads led to or from “Hunts” throughout SA. Every city I visited and person I spoke with in the industry had a connection to TBWA\Hunt\Lascaris in some way– and not by design. TAXI has similarly lead the industry in Canada’s major markets and enjoyed tremendous growth over the past 10 years.

Where do they differ? In their toolbelts. Canada has resources that SA doesn’t have. Though the population is smaller in Canada, [it has] an excellent broadband connection and a high smartphone penetration (higher than the US even) that allows digital ideas to come to life.

The two agencies also differ in the day-to-day reality of their environments and cultures (see previous question) and thus, the way they live their lives and approach their work.

But specifically in the realm of the advertising industry, I have found more similarities than differences in the two countries and agencies I’ve visited to date.

Read the full interview in BizCommunity