by MarkLives (@marklives) Is adland embracing an African narrative? Are South African advertising agencies and brands embracing an authentically African narrative and aesthetic or do they continue to imitate American and European work? What can agencies, and brands, do to shift the paradigm towards embracing a unique creative identity that speaks to our African roots? First in our panel to tackle this question is adland veteran, Felix Kessel. 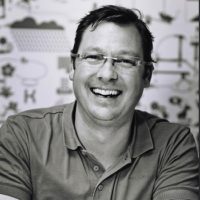 Felix Kessel (@felixak) is the former CEO/CCO of Leo Burnett South Africa and a co-founder of OwenKessel. After serving in advertising for over 25 years, he has moved to working on the industry, instead of in it, as a consultant helping on matters ranging from leadership to transformation and from creative relevance to people development.

I’m disclaiming that there is a bit of a rant in here. Forgive me. I do also hope to offer a solution.

In the light of the current wave of disgusting xenophobic violence, gender-based violence and racial tension, identity has become the central narrative challenging South Africa. I have a long-held notion that “The Rainbow Nation”, while celebrated across the world as the clarion cry of unity in diversity for the South African class of 1994, preached a moral we can’t live up to. Diversity by its nature is not unity.

We needed a rallying cry then. We so desperately wanted to move forward in peace that we overlooked something in the change that other African countries have found in their post-colonial emergence — a true sense of national identity, united as South Africans. Diversity, while powerful as a force for change, is not something you can hang your hat on as a belief, or a narrative that you can easily rely on to define you. Our sense of South African-ness is numbed.

Without that identity, the themes that emerge as SA creative narratives are insular, tactical and unfortunately a little trivial; we default to product, price and explanation littered with a bit of social commentary. It’s functional but not nearly meaningful enough. (I accept that there are some brands trying hard. Kudos to them, but it’s mostly a sea of sameness.)

What we are missing is the pivot, the lever that can move the country emotionally positively. I would argue that, until you have a clear picture of who we want to be as a nation, you can’t project that positive image into the world, and you let the negative ones define you — issues of privilege, gender, race, religion, ancestry, wealth, poverty and a host of other negative labels start becoming our narrative and our identity. That is something I, for one, hope to avoid.

As a friend of mine, Donovan Bryan, the ECD of Leo Burnett, once pointed out: we in advertising have the power of presidents, maybe even more. Think about it. The role of commercial art (read “advertising”), beyond creating growth for our clients, is to create a sense of common purpose.

We generate billions of rands in communication outputs every year to sell stuff. Imagine that we also decided, collectively, to use that immense platform to promote the very thing we so desperately need to define here — our determination of national identity, based on themes of themes of decency, unity, dignity, good values, acceptance and sharing.

Imagine every brand that could write into their advertising mandate for their communication teams and agencies that they would support the building of our national character through their advertising —the most-influential entities in the land contributing directly to building the very foundation of the ideal of what it means to be a good South African. The beauty is that, as long as it’s positive, anything goes.

We would start defining what it truly means to be a South African. Not the lip-service answer that we are a “rainbow nation” or some such platitude but telling stories with evidence of real character. That is a narrative that could truly mean something, one that builds our nation along powerful lines that could engender national pride once again.

I worry that there is no proper SA creative narrative because we haven’t yet landed on what it really means to be South African, no matter your gender, origin, colour, religion or culture. Let us ask some powerful questions:

That narrative is what every brand, every advertiser and every storyteller in the land has a chance to do something about. Then the creative narrative will be clear.

Before we sell out to the American dream (that is actually only for Americans), let’s try and create a singular dream of our own that defines and unites us. Tell your marketing departments; tell your agencies. You have power beyond imagining as you influence the people of this country. As you sell your stuff, you could also sell an ideal that may well be one way to secure a positive future for everyone.