#BigQEmployers: No bigger subject than issues of reputation

by MarkLives (@marklives) How successful have local ad agencies been in creating positive employer reputations? What do they consider best practice, how do they measure their reputations among employees and what impact has positive employer reputation had on their ability to attract star talent? Next in our panel to tackle this Big Q is Alistair King of King James Group SA, who decided to take a Q&A approach in responding. 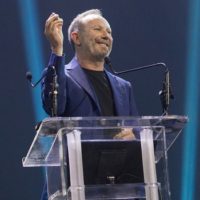 Alistair King (@ALsparkles) is co-founder and chief creative officer of King James Group SA — South Africa’s longest-standing pure independent agency network of 22 years. He has been inducted into both the Creative Circle (2017) and Loeries (2019) Halls of Fame, and has been voted the MarkLives Agency Leaders’ Most-Admired Creative Leader in South Africa five times —in 2018, 2017, 2016, 2015 and 2012.

There’s no bigger subject to me than issues of reputation. From my very first job, I was always very conscious of how I wanted to be looked at and thought of as a copywriting creative, and that defined everything — my career ambitions, my work ethic, my strategy for self-development, my attitude to award shows. Earning genuine respect has pretty much guided my career. “Substance over hype” has always been my personal touchstone and it’s fair to say I’ve carried that ethos into King James. Co-founder and CEO James Barty and I do fight about stuff, but we’ve never fought about our ethos or about how we should conduct ourselves in business.

2. What builds reputation and what destroys it?

Reputation is a bit of a stew, in my view. Its ingredients are many, but nothing builds reputation more than the work that ultimately ends up in mainstream media. That is what consumers admire. That is what marketers admire. That is what attracts great people to your agency. Good people are attracted to the most-creatively productive agencies — that is what ultimately defines you, so that is what I focus on above all else. I’ve always had faith that, if your work is consistently good, consistently effective and consistently hard to ignore, the smart marketers will notice and remember your name. An agency’s morale, and its reputation, collapses when its work is poor. Work that you aren’t proud of sucks the soul out of an agency.

3. What role does an agency’s culture play in building reputation?

When you walk through an agency, its culture is unmistakeable. It doesn’t come from the founders’ quotes on the walls, the awards on the shelves or the trendy interior decorating; it’s the buzz, or lack thereof, that bristles in the air and bounces down the corridors. An agency’s energy is either electric or flat-lining. It shows on the faces of every member of staff you walk past. All the enthusiastic tweets, all the celebratory PR, all the joyous corporate-culture videos created for pitches can’t change the fact that an agency’s soul is either genuine or hugely contrived, and that’s is based on thousands of small, almost-indiscernible actions and gestures that start with the leadership of the company. It’s those actions that are observed, absorbed, picked up and carried into the work by the rest of the team. Those actions turn into bold, innovative ideas that quickly become conversations at braais with colleagues from other agencies. They become praise and recommendation at marketing dinner parties. They become the foundations of your reputation, whether you intended it or not. And when you add that to a creative product that is ground-breaking and moves a client’s bottom line, you have a winning formula reputationally.

4. How have you built King James’s culture?

James and I have never attempted to define our culture. We obviously lead and guide it based on our principles and our expectations of the kind of agency we want to have, but we’ve always let it evolve naturally and incrementally as people come and people go. Many of our rituals have subsequently been created by our people while they were with us and we embrace that. We’ve made a few small decisions that have set the tone for our culture. One decision was to not put anything on our walls that wasn’t about our agency, our people and the work we do. Our art is from our people. If they get published as a writer, it goes on the walls. We feature the hilarious things they’ve said and we showcase a lot of memorabilia from shoots, renderings and storyboards from the work we are most proud of. We are fortunate to have never had to adopt anyone else’s culture, so we celebrate our own. We generally approach everything with a sense of humour — and we try our best not to peddle or drink our own Kool-Aid.

5. What do you admire in other agencies?

It’s all about the work for me. If I see an agency that is happy, motivated and proud of the work they do, that impresses and inspires me. Good work takes time, it takes a real fighting spirit and it takes a hugely motivated staff that often has to invest a great deal of personal and emotional energy to get great work made for real. There are so many ways that an agency can fudge its reputation these days — I try to look beyond the social media, past the often-questionable creative award wins and simply look at what’s behind it all.