by Sabrina Forbes. For one day only last month, SuperSport held a popup gallery on the eighth floor of the Capital Hill building in Benmore, Sandton, where media — including MarkLives — and rugby fans attended the sports broadcaster’s official 2019 Rugby World Cup launch. We also chatted to digital sports marketing agency, Retroactive, about the campaign.

In the middle of the rooftop venue, displayed on white walls, were 15 striking artworks created by five young South African artists with an appropriately clear underlying Japanese theme (Japan is the host this year). 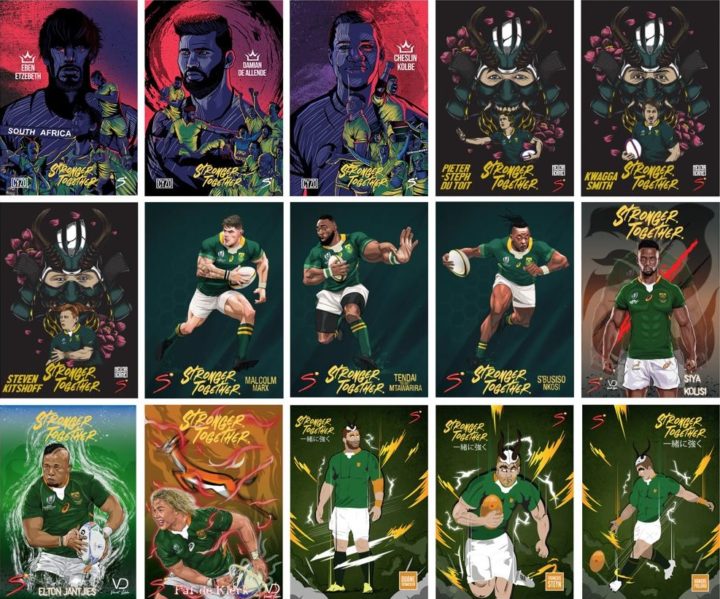 Some of the original framed A1 prints really stood out.

There was a dark, almost moody one featuring Eben Etzebeth. Then there was one where Francois “Faf” de Klerk’s golden hair looked so real, you could almost touch it. It goes without saying that the print of our Springbok captain, Siya Kolisi, showed him standing firm, arms at his side, fists held tight, staring right ahead. Then I spotted Handre Pollard wearing what looks like a skull of a Springbok, preparing to take a shot on goal. My favourite is an image of Tendai “Beast” Mtawarira that looks as if he’s running through a group of All Blacks, grasping the ball and face-planting one of them with his massive hand. My only question, though, is where’s Willie le Roux? I’d be happy to have a poster of him on my wall.

The evening kicked off with MC, Xola Ntshinga, welcoming everyone and introducing the panel which included John Smit, Odwa Ndungane, and Butch James. They spoke about their experiences as Springboks and what their hopes were for our boys this year.

“Picking the top five or six is pretty easy,” said James. “New Zealand by their last game, they’re right up there. Wales will also be competing and, of course, England and Ireland. I wouldn’t write off Australia just yet and then, of course, I love our chances. I think we’ve got a brilliant pack of forwards and our scrums and lineouts are strong. It’s hard to get defense to gel and to do a rushed defense; we saw that with England, the guys not trusting each other. It didn’t work for a number of games but they stuck to it and I think they’re reaping the rewards now.”

According to Odwa, South Africa had the momentum going into the world cup and the squad to do it, while Smit said that, if he could script it, he’d like to lose marginally to New Zealand in their first game, meeting Wales in the semi-final and then again meet New Zealand in the final.

MarkLives spent some time chatting to three of the five artists.

Seyabonga Vincent “Vindollar” Lebeko, who created the artworks of Kolisi, De Klerk and Elton Jantjies, says he’s happiest because this project has made his parents very proud of him, and being involved in a first for South Africa is something that makes him feel very privileged. He explained that his three designs all aim to show what’s quintessential about rugby for him, and that’s shorts and strong arms. He spent a lot of time looking at pics of each of the three to decide on a pose that would immediately show they are rugby players.

Corne Nel’s designs of Pieter-Steph du Toit, Kwagga Smith, and Steven Kitshoff are reminiscent of Japenese samurais. He told MarkLives that he immediately thought of samurais when tasked with incorporating Japanese elements into his designs and worked hard to combine them with the ‘bok’ element. The toughest part was drawing the lips of each player because he felt at that point he was having a very intimate moment with each of them.

Joel “Cyzo” Matladi is the only designer to incorporate elements of the crowd into his artworks, saying that he looked at Etzebeth, Damian de Allende, and Cheslin Kolbe plus rugby supporters to understand everything that lies behind the passion of this sport. His darker, moodier theme was chosen because he believes all his three players are “badasses” and he wanted to show them that way.

We were tasked with executing a PR launch for SuperSport to communicate its RWC19 coverage — the most-comprehensive package for a Rugby World Cup.

We considered the aspects that make Japan unique — elements such as karaoke, sushi, bullet trains all spring to mind — but there is a synergistic link between superheroes and a Japanese export: anime and manga artistry.

#GalleryOfChampions saw the commissioning of five SA up-and-coming artists who each completed three illustrations of SA rugby players. These illustrations were exhibited for one night only in Johannesburg.

We reached out via a tweet, asking if there were young SA illustrators who have a notable Japanese influence in their work, and were pleasantly surprised to uncover five extremely talented individuals:

The A1 originals from the popup gallery were then auctioned via Facebook, where the pieces collectively fetched more than R43 000 for SuperSport’s CSI — Let’s Play.

We leveraged the prints to drive PR, used the SuperSport Blitz channel, and produced our own in-house video content to communicate the story. Hosting influential media and key influencers at an atypical launch allowed us to generate social buzz for this launch and resulted in coverage for SuperSport in an array of lifestyle publications — most notably, the front page of the Sunday Times.

Uber Exposure for event management and venue, Retroactive for strategy and production of content.

#Campaigns is features insight into the brief, creative idea, production challenges and results of South African communication campaigns, both ongoing and recent. Have a campaign worthy of being featured in #Campaigns? Submit a short motivation to