by Herman Manson Rapport has followed the path set out by City Press late last year by awarding its magazine supplement, My Tyd, to content marketing firm New Media.

New Media launched i magazine for City Press in October 2011. The magazine, which has been distributed with the paper in KwaZulu-Natal and Gauteng, aims to mimic the UK markets’ high-end Sunday magazine reads.

Rapport approached New Media shortly after the launch of i, initially wanting to translate the magazine for the Afrikaans market. It’s in line with the dual-language magazine strategy Media24, which owns both City Press and Rapport, as well as a majority stake in New Media, often employs. The combined dual-language circulation of the magazine would have shot it into the big-circulation leagues.

Scratching beneath the surface a little, the New Media team soon realised that the markets for City Press and Rapport are so divergent that simply translating the magazine into an Afrikaans edition would not fly with Rapport readership.

A new plan was drawn up to produce a unique Sunday magazine read for the Afrikaans market. It will retain the name of the current Rapport 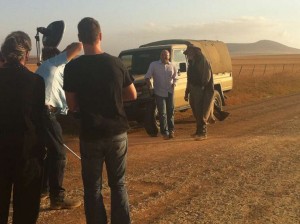 Behind the scenes at a My Tyd shoot

magazine supplement, My Tyd, but will be produced on glossy paper as an A4-format 40-page magazine.

The first issue will debut 4 March 2012 and will be distributed nationally. The first print run is around 300 000. As much as 70% of the content will be original content commissioned for My Tyd, and the other 30% may borrow lifestyle content from i magazine, but even that will be carefully rewritten in Afrikaans, rather than simply translated, promises New Media’s content director Clare O’Donoghue.

My Tyd will continue to carry TV listings for Rapport. It will also carry short, byte-sized lifestyle content and columns, with a main feature tucked in the middle alongside some one-page reads. The back of the magazine will consist of puzzles, a kids’ page and star signs. Production values are a huge leap on the current incarnation of My Tyd.

New Media has appointed Elmari Rautenbach as the launch editor. Rautenbach is currently the national books editor for Media24’s Afrikaans daily newspapers, is a former editor of Insig magazine and a former deputy editor of Drum magazine.

My Tyd is expected to attract a younger demographic to Rapport and will cater to the changing, more urban Afrikaans demographic. It is also hoped that it will entrench loyalty and create a larger regular readership for the newspaper.

O’Donoghue says that when media products face circulation declines, as the newspaper industry does in general, is when the best and most innovative work often gets done. The just-released ABC figures for Q4 2011 shows 97 000 fewer (-6.7%) daily papers sold, compared to the same quarter of the previous year, while circulation for weekly papers reflected a decline of 3% or 17 000 copies. Weekend papers declined by a whopping 4.9% (108 000 copies) over the prior year, with Rapport dropping 9.22%. The revised magazine supplement strategy rewards readers for buying newspapers, argues O’Donoghue.

Producing a weekly title has been a challenge, admits New Media’s business development director Andrew Nunneley. Even so, the team has managed to consistently maintain the quality of i, and should for My Tyd, in spite of the pressured deadline environment.

New Media has had to invest in larger editorial teams than initially expected, admits Nunneley. My Tyd will have six dedicated staffers and share the New Media production team. Most of the writing will be outsourced to freelance writers.

On City Press and i magazine, Nunneley says the magazine has been well-received and that its footprint will soon extend into provinces beyond its current markets in KZN and Gauteng. It has helped build awareness of the new City Press positioning and is in line with the papers on-going repositioning to cater for a broader audience. New Media has also launched the City Press ViP Club on the back of the magazine. A tablet app is also in the works for i, although details on the timing of its launch isn’t available yet.

Nunneley says New Media is looking for further magazine supplement opportunities within the Media24 group. Having signed up both an English and Afrikaans language supplement in the Sunday market, the Saturday and/or Friday market remains wide open.