The revolutions that have been sparked in the Middle East since the start of the year may have faded in the minds of many Western media consumers but it was still very much on the minds of local speakers at the MEA (Middle East and Africa) region Microsoft Advertising Imagine Istanbul 2011 conference that took place last week in Istanbul, Turkey.

Here, they are still living the change as the region transforms, often bloodily, with protests on-going in several countries, and democratic elections taking place in others, often for the first time in decades.

As a reminder that regional politics and crises can affect global organisations in unexpected ways, and that a world connected by information still doesn’t mean those connections cross the lines we draw on maps, Israeli delegates did not attend the conference (Israel and Turkey aren’t getting along on the diplomatic front at the moment) but present were representatives from throughout North Africa and the Middle East, as well as South Africa. 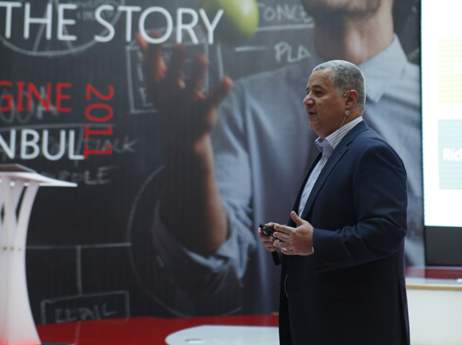 With a population of 1.54 billion, a combined GDP of US$3.567 billion and IT spend totalling US$56.8 billion, the MEA region is emerging as an increasingly important market for multinationals as Western economies continue to struggle to escape the effects of the Great Recession. Internet penetration in the region stands at around 13% and bandwidth penetration at 7.7%, says Ali Faramawy, corporate VP at Microsoft and president of Microsoft Middle East and Africa.

Microsoft (@MSAdvertising) has become a serious player in the online content and marketing space through Microsoft Advertising (the conference host), a division that already generates of 10% of Microsoft’s revenue, and which is positioned to manage and monetise Microsoft’s content and media platforms.

In the MEA region, this includes Skype, with 170 million users grabbing 20% of all international call traffic. Other Live assets includes the Xbox, Windows phone and search engine Bing, as well as the MSN portal.

Skype aims to become the communications choice for a billion people every day. Microsoft hopes the better integration between Skype and Windows to ensure it remains the best platform from which to use Skype. In the US, Microsoft Advertising is already selling advertising on Skype. Video already takes up 43% of all Skype-Skype minutes, says Faramawy.

The Xbox is another of the properties it sells advertising on, and it’s available in SA, heading for the Gulf and will arrive in Turkey soon. Windows phone is Microsoft’s attempt to re-enter the competitive cellular market in partnership with Nokia.

Bing, the search engine, has just moved from third to second position in the US search rankings, says Faramawy, and is expected to roll out in new markets soon (including MEA over the next three years). Faramawy says Microsoft aims to have substantial Bing product offerings in around 70 markets.

Alexandre Michelin, GM for MSN Europe and executive producer for MSN EMEA, says the MSN portal now has 500 million users and is adding 50 million a year, generating 20 billion page views a month. MSN is developing and implementing a new strategy to move the portal beyond passive engagement with consumers to become a destination of choice for online consumers. MSN is currently the number-one portal in 26 markets.

In his opening remarks at the Imagine 2011 conference, Faramawy described how a couple of years ago he was interviewed on Egyptian TV and he was asked about the Egyptian government’s performance. He noted that, while economic growth was positive, he didn’t see it trickle down to people on the ground as quickly as one would expect.

Of course, Egyptians, empowered with information, and tired of the political abuse they suffered without the conventional pay-off of economic security, overthrew the political establishment.

Looking back at events of the past year, with regimes falling across the region and unrest continuing in others, Faramawy says his initial thoughts on what it would take for countries to remain politically stable during the current extended economic crises – which he listed as delivering on education, public healthcare and justice – has expanded to include human development and freedom.

The mission of IT, Faramawy says, is much bigger than he ever expected, and relates to all five fields mentioned above, including, of course, helping secure freedom from political oppression. IT has become an enabler to realise the potential of the MEA region and what its people wants it to be. Switch on any news channel and what people want is abundantly clear.

The revolutions in the Middle East and North Africa aren’t simply about overthrowing authoritarian and corrupt political regimes; their demands also extends to the economic elite, as the Occupy Wall Street movement and continued protests at G8 and G20 conferences prove. Business would do well to listen and adapt with more agility than their political peers.

“What is good for people is ultimately good for business,” says Faramawy, who promises Microsoft MEA is committed to ensuring it lives up to its human development goals and not focusing solely on financial goals.

This story is one of several filed from Imagine Istanbul 2011 for Bizcommunity.com. Microsoft Advertising sponsored the flights, accommodation, meals and transport during the duration of the conference.