Brainy ads for top magazines in US 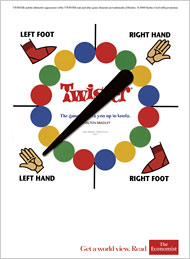 These magazines are creating non-traditional campaigns aimed at jolting people to pick up their titles. The Economist is spoofing Twister and sponsoring an art troupe doing political satire (in the run up to US elections). The Atlantic meanwhile is producing neon signs around top stories asking ‘Is Google making us stupid?’ and filming the answers from passers by. Ads in spots known to be frequented by media planners, including selected muffin displays and restaurant menu boards, are also part of The Atlantics campaign.

“Both campaigns are indicative of the increasingly unusual efforts by the traditional media to catch the wandering eyes of younger readers as well as younger employees of media agencies who help decide where marketers buy ads,” writes the NY Times.