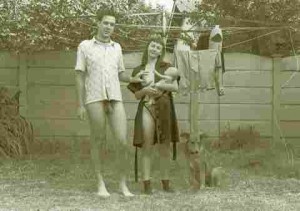 Business Day picked up on an interesting story yesterday. Artist Richardt Strydom won the Sasol New Signatures art prize for his black and white photograph depicting a half naked couple with a baby doll and their dog. Titled Familieportret2, the image is set in a bleak, uncared for urban back yard.

The artist describes his work depicting and exposing, both literally and figuratively, “the extreme misery, the pathos and dehumanization of poverty. In a true sense, it is a picture of severe loss and finally a loss of human dignity. At the same time, there is indeed a hidden sexual message in the couple’s nakedness and the presence of the baby doll on the mother’s breast. It is the message that when earthly possessions are lost, there is still an obstinate will to live and love.”

After the prize was awarded Sasol thought it prudent to distance itself from the winning work. In a statement to Business Day the group said “we will naturally accept the decision of the judges. We also recognise that some members of the Sasol staff as well as some members of the public may be challenged or even offended by the piece and we feel it is both responsible and appropriate that we distance Sasol from the artwork.”

Does Sasol want to position itself as a patron of the arts as long as it is art it likes or does nothing that challenges or comments on society? One wonders, are we culturally richer for this type of patronage, or poorer?

It also raises issues about Sasol’s own identity – a business giant that positions itself as progressive, at the forefront of change and innovation. But when the chips are down and it can no longer hide  behind glossy ads, more conservative, more middle of the road than maybe itself expected.

* The tabloidisation of this blog begins!

8 Responses to “Middle of the road Sasol risks arty ire*”