by Oresti Patricios (@orestaki) 2015 — what a brilliant year for innovative advertising! In this final column for the year, I look at the top three South African ads for 2015 [also see Part 1 counting down from no. 10 to no. 4], and choose that one piece that should be recognised as the best of the best.

What’s been exciting about the past 12 months is that we’re beginning to see a very distinct ‘own culture’ in advertising, proving that at last SA advertising has embraced being truly South African. In the 20-something years of our democracy, frontrunners have pushed the envelope, but this year it appears the industry has matured and that there’s a distinct commercial culture that’s as homegrown as a Johnnie Walker, kasi chicken dust, ChesaNyama, Nando’s or Madam Speaker.

That said, let’s look at the best of the best.

#3. More Than You Expect by Ninety9cents for Checkers


In third place is Ninety9cents, the agency that paired two SA icons: Suzelle of Suzelle DIY and Nataniël for a brand-building exercise for Shoprite Holdings’ Checkers. Both characters fall into a self-effacing genre of humour that one could call awkward/cringe/ironic. This kind of funny-bone is unique to SA, and very distinct from the ‘cringe’ humour of Britain or Australia.

Nataniël is all eye-rolls and camp observations, while Suzelle is wide-eyed naiveté, making frequent use of non sequiturs, fake smiles and awkward pauses. Together, they are a match made in heaven (or somewhere close by). His role is to guide her through the new gourmet sections of the Checkers store — the international cheese, the coffee and the wine. “I love a Bordeaux!” announces Suzelle (except she pronounces it ‘bored-oaks’).

Nataniël responds to her naive enthusiasm with his trademark sarcastic expressions, playing to the audience, while Suzelle is blithely unaware of her faux pas.

Matching the two up is a stroke of genius, and we can only hope there are more of these encounters planned for Checkers in the future. This is classic SA comedy, and the kind of thing one may send to friends and family overseas to make them even more homesick than they already are.

#2. Tears of the Hipster by FoxP2 for Garagista

The crown for second princess goes to FoxP2, whose “Tears of the Hipster” campaign for Garagista Beer had us rolling in the aisles. 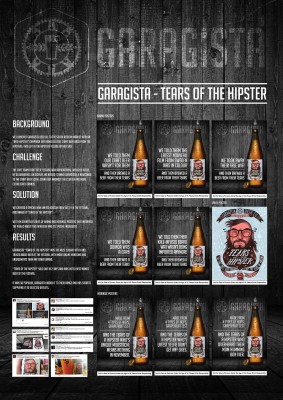 In 2014, we were treated to hipsters hijacking a ‘special edition’ of Garagista Beer, and this year the hipster-baiting continued with a poster campaign that was so successful that it’s become part of the beer brand’s inventory. The campaign was timed to coincide with the Cape Town Festival of Beer, and a special label that Garagista made, called “Tears of the Hipster”, which features a caricature of a long-haired man with flowing tears.

“We told them their favourite kale-infused beard wax wasn’t being imported any more… and then brewed a beer from their tears,” reads the one poster. “Made from 4 types of hops, grapefruit zest … and tears of a hipster whose latest selfie wasn’t getting any likes,” is another.

The campaign blew up (in a good way): the limited-edition beer sold out within two days of the festival, and the brewmeisters decided to release Tears of the Hipster as part of their range. It may now be found at ‘selected outlets’ — so probably not at the neighbourhood pub, but at trendy spots where hipsters wouldn’t be seen dead (or so they may claim!).

#1. One of a Kind by King James Group for Santam


And the winner is… King James Group’s quirky, self-reflective take on what makes life in SA so unique — for Santam, the insurance brand.

The TV commercial tells the story of SA life, things that we largely take for granted, as seen through the eyes of foreigners who have visited here. It starts off with some lighter aspects of SA society, such as the ‘tjop en dop’, or the ‘bakkuzi’ (which is a bakkie filled with water, which gets driven to a rugby game).

Then, towards the end, the mood becomes more ironic, as people start talking about car guards and loadshedding. “They have beautiful homes, but with really high walls,” says one Russian woman to another.

“To keep something in or out?”

The ad is effective because, as a nation we can laugh at ourselves, we can face our problems head-on, and we don’t need to make any excuses for what we are — just as crazy and contradictory as any other country in the world. The message is solid and clear, and manages to tread that tricky line that insurance companies have to tread — selling peace-of-mind in case of tragedy, without necessarily scaring your potential customer.

This is a feel-good, optimistic campaign that makes keen observations of SA society, with spot-on casting, acute copywriting and fly-on-the-wall style cinematography, and direction that pulls it all together into a cohesive whole. It’s refreshing to see an insurance brand taking a risk in thinking laterally about its product, and doing marketing that gets people talking, with a smart, optimistic message — and that, dear readers, is why we have selected Santam’s TV spot, “One of a kind”, as the no.1 Ad of the Year for 2015.

It’s been an interesting year in advertising, not only in the ‘conventional’ media, but in digital/online, too. The economy has hit us all, and even though economists are bearish about SA for 2016, I think we are going to see great strides being taken in advertising and marketing. Tough times call for innovative thinking and pushing the imagination muscles. May we all emerge leaner and better for it.