by Oresti Patricios (@orestaki) What happens when you look around you and almost everyone’s a hipster, except you? As with all cultural phenomena, hipsterism has hit full stride and is now the source of many a meme, and has broken into the commercial mainstream. So no surprise *drumroll* that hipsterism is the focus of this week’s wickedly clever advertising campaign from FoxP2 for Garagista.

This small brewery in Cape Town has hooked into the prevalent ‘anti-hipster’ sentiment, and has used it to create an exceptionally effective marketing campaign running under the slogan “All beer. No bullshit.”

What is encouraging (and notable) is that this is a small company with no ‘big brother’ owners, so it must have had a limited budget, yet — with the help of its agency — it has come up with such a strong and smart campaign. 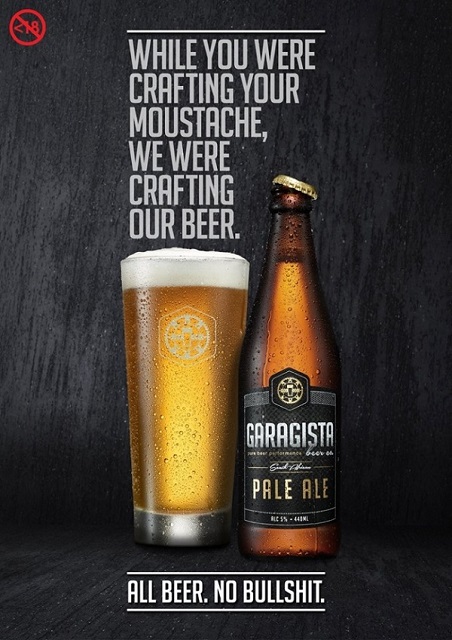 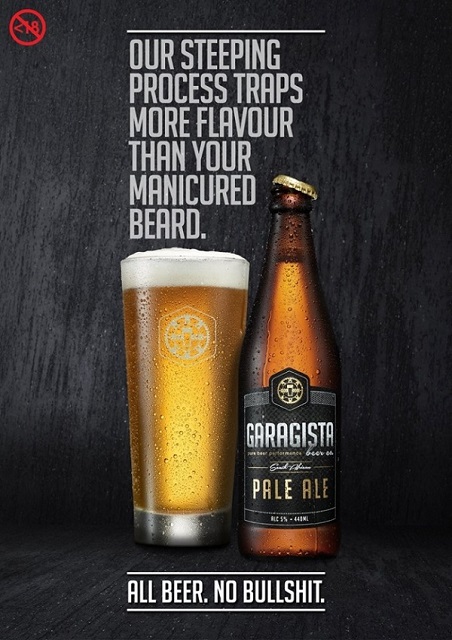 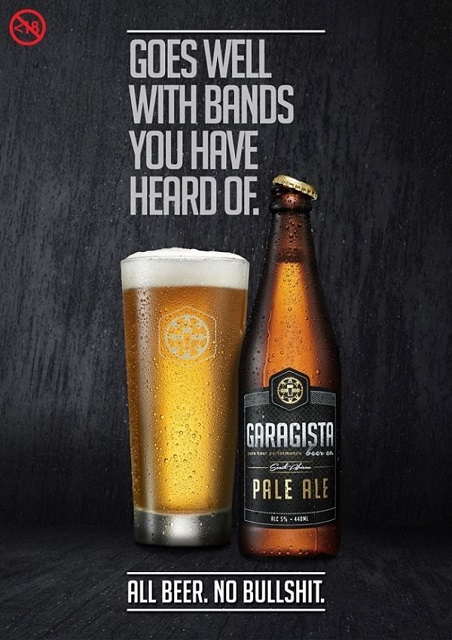 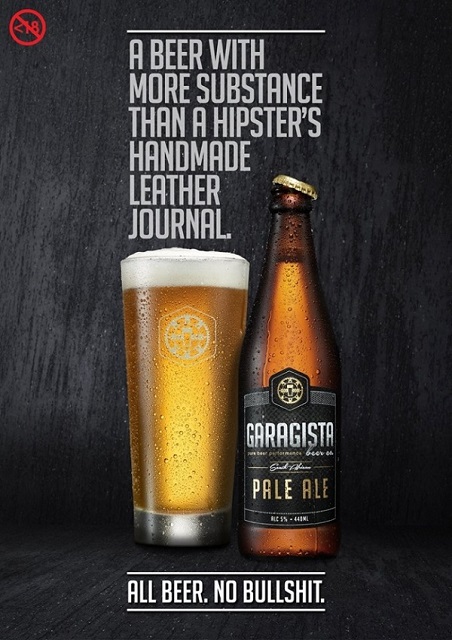 What, then, is a hipster?

A couple of years ago, we started hearing about “hipsters”. Every era has them. When I was younger, we called them “pseudos” or “pseuds”. After that, the term “trendoid” emerged.

As with most other cultural types who aspired to ‘coolness’, being a hipster is all about state-of-mind. For those of us who don’t quite make the grade, this international subculture could be identified by their androgynous look, tell-tale cultivated beards and moustaches, and the annoying habit of knowing all the good stuff before everyone else.

It’s one of those cultural phenomena that has slipped into the zeitgeist, and seems to prove that humans are essentially tribal creatures: we love to use our brains and creativity to differentiate. At its worst, it leads to racism; at best, perhaps clique-ishness and insular attitudes.

Sometimes, the hipster aesthetic is related to the ‘hippie’ movement, in terms of natural fabrics, long hair and beards but, in some ways, it seems to attach itself to the ‘green’ movement, favouring bicycles over cars, and a sort of alternative lifestyle that seems most suited to Cape Town and its culture of artists and musicians.

In her Huffington Post Style column, Julia Plevin writes: “The whole point of hipsters is that they avoid labels and being labeled. However, they all dress the same and act the same and conform in their non-conformity. Doesn’t the fact that there is a hipster look go against all hipster beliefs? Hipsters are supposed to hate anything  mainstream or trendy.”

But back to the campaign. There is a print component and a YouTube video to back it up, produced by FoxP2 Cape Town, with film production by The Institute (aka The Institute of Amazing sh*t). 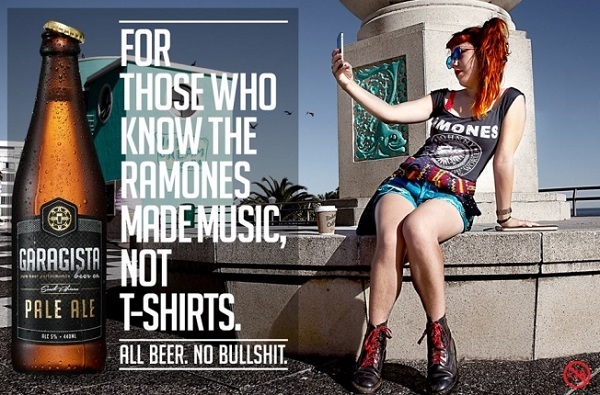 While the campaign has received some criticism from people who feel either that the hipster meme is passé or that it’s an easy target, I think it’s going to appeal to the mainstream of its target, and even self-identifying hipsters should have enough of a sense of humour to enjoy having a bit of fun poked at them. Surely?

The print campaign comprises posters with a single picture, supported by a headline, and the slogan: 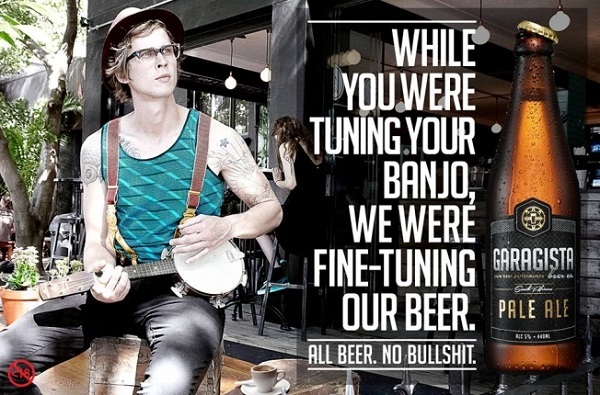 Another reads: “Every time you drink a Garagista, a hipster’s favourite band goes commercial” — poking fun at the hipster tendency to only listen to lesser-known (if not unknown) bands, ‘because they’re, like, not corrupted by materialism, dude.’ (Oops, feels like some of my own inner hipster popped out there!) 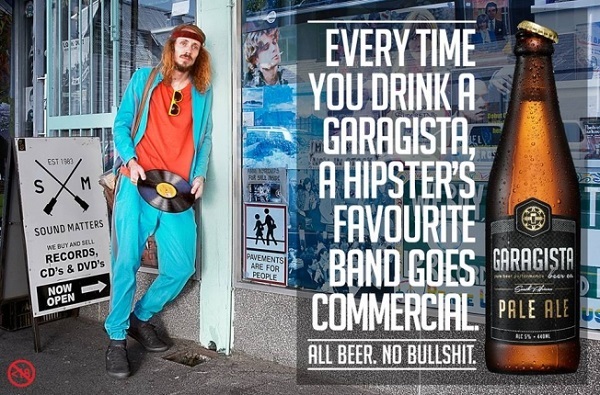 A man is seen unloading beer crates from a truck, when he is interrupted by a hipster on a bicycle. The hipster asks the trucker, “So, is this beer really limited edition?” The trucker indicates the signage on the truck, which reads “Limited Edition Garagista beer”.

“What do you think? That’s what it says,” replies the trucker. In response, the hipster pulls out a harmonica and blows on it. 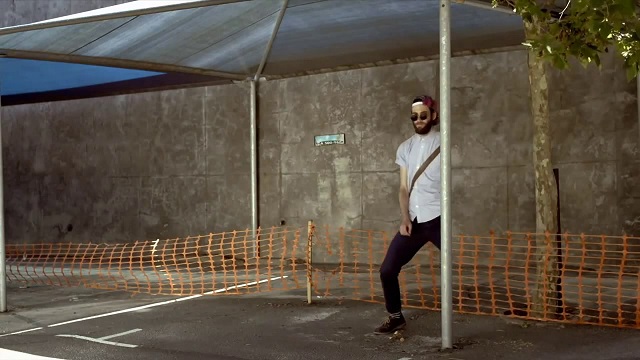 In response, all sorts of hipsters emerge from hiding places. A posse arrive on single-gear bicycles (apparently single-gear bikes are current in hipster culture, because they’re, like, ‘green’). One even ‘appears’ magically from behind a pole. A slo-mo sequence follows, as the hipster hijackers grab the beers. It’s mayhem as they fight each other for the spoils. 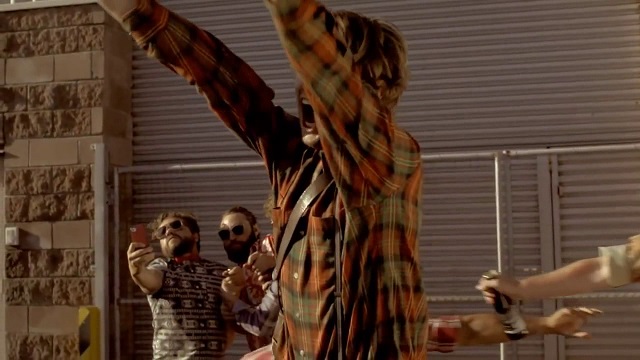 Some of the background action is classic — including two of them doing a ‘selfie’ as the battle ensues.

Soon we hear sirens and the beer-hijacking hipsters scarper, sadly dropping some of their spoils as they do. The final pack shot is of a bottle against a manhole cover, with hipsters running off into the distance.

The production value is great. Location sound was used, which added a level of realism, and the final touch was the addition of a song that sounded like Cat Stevens (but don’t ask me, I don’t listen to obscure bands.) 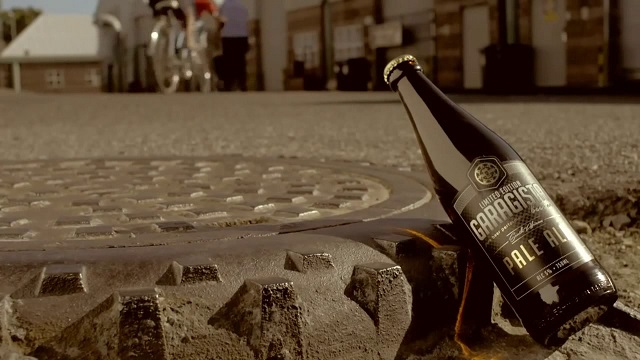 What better way to reflect on a trend that’s matured than to use it for a commercial that celebrates a wonderful new(ish) trend — craft brewing.

What makes the campaign work, of course, is how ingenious and self-deferential it is. Intelligent, ironic and somewhat sardonic, the ad is pure delight because the brand doesn’t take itself too seriously and is prepared to take a risk.

Tell you what — craft brewing is one trend we’ll never easily tire of or find annoying. Viva Garagista! Long may your brand reign while continuing to surprise and delight us!