by Oresti Patricios (@orestaki) It’s that time of year again, when Christmas decorations are out in the malls, the newspapers are full of brochures and seasonal specials, and the promise of a well-earned break is just around the corner. With two weeks to go until Marklives.com closes shop for the holidays, it’s time to do a countdown of the Top 10 Best South African Ads for 2014.

Over the past year, I have declared 44 commercials or campaigns to be “Ad of the Week”, and it hasn’t always been easy — in one case, I even had to declare a tie. There were also a few ads that ‘slipped under the radar’, and one is just so good I’m adding it to this #Top10 list.

Tenth place goes to the Johnny Walker campaign, produced by King James and its digital division, Punk, that manages to convey the qualities of its product and draws the user into an engaging experience.

The first stage was a video campaign, wherein Johnny Walker invited well-known molecular gastronomic chef, David Higgs, to create a ‘taste test’ in order to profile four very different South Africans: rugby hero Bob Skinstad, architect/design guru Mokena Makeka, TV presenter Jeannie D and radio host DJ Fresh. Instead of blindfolding them, Higgs used his culinary wizardry to disguise and re-engineer the various ingredients. This way the test subjects were forced to keep an open mind about what they were putting into their mouths.

The video segment showed all four being taken through the process, and their reactions. Using the profile of each person, Higgs and the Johnny Walker team then assigned one of the four whisky labels to each test candidate.

The next stage took the form of an interactive website that took ordinary, non-celebrity people such as you and me through various stages, with visual and audio stimuli, to choose preferred moods, smells, flavours and environments. From this, the suggested Johnny Walker label was offered, in a video presented by Higgs. It was a very-personalised experience, and the user was entertained and stimulated.

In ninth position, here’s one we missed: a print ad for VW Golf, by Ogilvy & Mather Cape Town. The picture was beautifully retouched by Rob Frew, and the copy simple: ‘0-100 in 5.0 seconds. New Golf R.’ 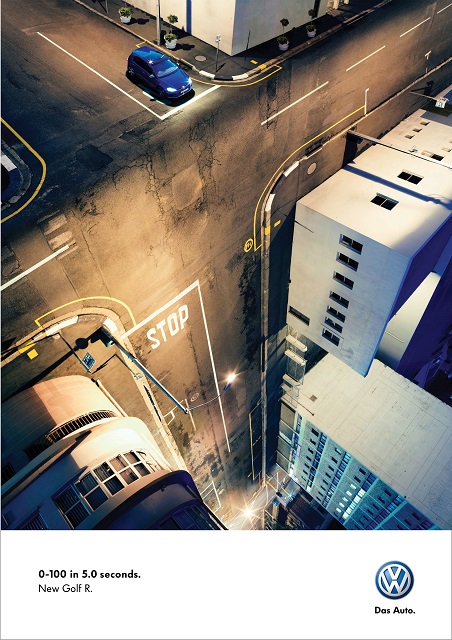 The picture shows a Golf stopped at a stop-street, and ahead a sheer drop. It’s a trick perspective picture where you don’t know which way is up, and from the point of view of the car, the street looks as if it’s heading straight down —a great visual play for what it might feel like to go from zero to 100 in a Golf R — terrifying yet exciting.

It’s an eye-catching ad that gets the message across, with a visual message that forces you to look twice and think.

#8. A reality show with a difference #KeYona

No. 8 is the Nedbank Ke Yona campaign by Native VML. The bank sponsors the Nedbank Cup, as well as sport in schools and at club level.

The Ke Yona challenge took the form of a reality show that selected amateur soccer players from across the country to create a team to take on the winners of the Nedbank Cup. Various media were used, including a tie-in with SABC1, which screened weekly updates, social media, and animated clips by Mdu.

Seventh place goes to a company that used its own infrastructure as a medium — in a campaign conceived by digital agency Gloo, FNB used its own ATMs to persuade people to switch banks.

FNB | ATM Switch from Gloo on Vimeo.
When someone from another bank used their card at an FNB ATM, an obligatory message warned the user that an additional fee will be charged. Then another message popped onto the screen, offering to help the user to switch banks.

The message was tailored to the user’s own bank; for example, an Absa client would get the message: “If your bank is making you see red with bank charges, switch to the bank with free card swipes, fuel rewards, and more.” Other messages played with the opposition banks’ slogans.

Very clever, and apparently it worked — FNB claimed to have gained thousands of leads from this campaign.

Sixth place is taken by Guinness ad, ‘Sapeurs’, created by agency AMV|BBDO. The TV commercial celebrated the Brazzaville phenomenon of gentlemen who dress up in fancy suits and lend their ‘ambience’ to formal occasions.

The ad was shot in various locations in Durban, South Africa, and an accompanying documentary released on YouTube was shot in Brazzaville, Republic of Congo.

This ad formed part of AMV BBDO’s “Made of More” campaign for Guinness, which is all about celebrating people who put more into life to get more out of it.

The countdown continues next week

Next week I’ll continue the countdown, as we work our way to numero uno. Sadly, there will be no prizes for the winner, only the honour and respect you will inevitably earn from your peers.