By Mandy de Waal (@mandyldewaal) I resent advertising. Like a reformed smoker I used to work in the industry and consult to technology and other brands about how to get more people to buy their stuff. I watched loads of television in those days but nowadays the pathetic appeal of DStv programming and the fact that Ira Glass lives on iTunes has changed things. Advertising’s a grudge experience for me, and on the days I do watch Gordon Ramsay, Californication or Dexter, it is great to be surprised by supremo advertising that’s better than the 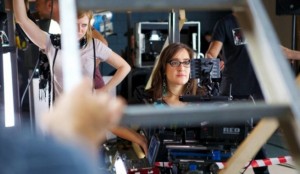 boring norm. For the most part local commercials are wall paper, but it’s a knock-out when someone comes along who just gets what advertising should be about.

Amy Allais of Ola Films is one of those people. She makes advertising that doesn’t make me want to jab a thumb in my eye. More than that – she makes advertising I actually enjoy. That I’ll watch again on YouTube, because it’s funny, smart, a visual feast, tells a story, captures the cultural zeitgeist or all of the above. Yes, I’ll come out and admit it. I’m an Allais fan girl. She had me at Vodacom’s “All The Single Ladies” and by the time “Daddy Cool” came around I was a convert.

In a world where advertisers are slow to realise that people like me have media choices, Allais’ work sticks out like a saw thumb. The content tsunami is coming at people like me so thick and fast that only the best stuff like “This American Life”; TED; The Moth and that creepy but über-good looking blood spatter expert make it through the door for the likes of me.

Advertisers need to get smarter to rise above the noise, so I wondered how that happens – what sets advertising movie magic apart from mediocrity. A little while back I spoke to Allais about her secret sauce – what it takes to make advertising ‘movies’ that creep under your skin and into your psyche.

“Advertising must be entertaining, it is increasingly important so people have to want to watch,” says Allais during a phone interview. “Large corporates have so many rules and checklists. (When you’re making a commercial) you have to be a demo or ‘an appreciation moment’,” she says.

“This is the exact opposite of the kind of movies that people who love make commercials like making. It obviously works, but people despise doing it. I don’t know how it works,” says Allais, adding that she’s sceptical of the advertising research process which she feels constantly scuppers the making of good commercials.

“We live in a world where people can watch so much and have so much choice. My own life has made myself impenetrable of advertising because of how I select and screen out media that is thrust at me. People feel very resentful about the onslaught, about the iniquitousness and pervasiveness of advertising. People resent advertising and can avoid it,” says Allais who says she doesn’t have a television at home and hardly listens to radio.

“I listen to podcasts that come from overseas. I listen to the odd SAFM and 702 programme, but advertising doesn’t reach me. But I do see good ads because people forward me ones that are really good.” Allais is of course talking about the illusory viral affect. The fact that people pass on media that resonates with them, that they relish, that they want other people to enjoy too. “There is an illusiveness about these kinds of ads – it is quite hard to predict what people will get excited about,” she says.

“I had no idea that the ‘Single Ladies’ ad would be such a viral hit, but once we were going it was clear that it was a great idea. The ad tapped into the Beyoncé song which was already a viral phenomenon because people everywhere were making their YouTube dance videos for that song. Vodacom bought the rights for the actual song which is pretty rare. So often you don’t get the rights for the original song and have to do with some lame, watered-down version,” says Allais.

“The idea was that this guy goes around doing this dance with everyone. My treatment of the idea was to shoot everything on one lens from a locked-off angle, which was terrifying. This means there was no cutaways or other techniques to cover you.” Allais’ approach was risky because she was on location, had only one camera angle to use, and had to work with everyday people, as opposed to actors. She only had five days to deliver a compelling commercial that worked.

During the shoot, Allais and her crew shot farmers dancing in fields, soccer supporters dancing next to trains, yuppies dancing outside of high rises, mimes moving in the inner city, and big mamas shaking their booty on the beachfront.  “It was hectic because when you shoot on location, you can adjust camera angles to make the environment look good, but with this ad we couldn’t do that.”

The result was an ad that everyone talked about, that people mailed to each other, that many South Africans could related to and which is a sheer joy to watch. “If you are thinking about your brand, you want people to connect to a fabulous experience, whether it is visually astonishing, emotional or connecting. It’s about creating a piece of entertainment.”

Like me, Allais is a person that doesn’t naturally love advertising. Perhaps that’s why she’s so creative and produces commercials people love to watch. She knows full well that in a world of noise, wallpaper doesn’t cut it and that when a TVs blaring out a crud commercial people have options and will use them.

All The Single Ladies