Why iMaverick is changing frequency

by Herman Manson (@marklives)  iMaverick, the ambitious daily tablet newspaper from the publishers of the popular website The Daily 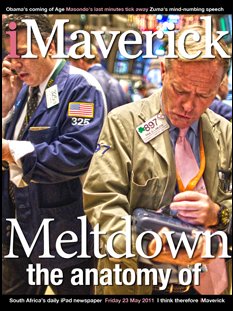 Maverick, is scaling back its frequency from daily to weekly. The news was announced to subscribers in an email earlier today.

Critics found the tablet paper overly long – it often ran well over a 100 pages. As much as 25% of these were short news items, billed as a roundup of the most important news, and made it a hassle to get to the in-depth business and political reporting the publisher has become known for.

According to Styli Charalambous, CEO of Daily Maverick and iMaverick, the team did discuss doing a shorter version of the daily, but decided this would compete directly with the website. “We always wanted iMaverick to compliment the website rather than compete with it,” says Charalambous. Initially we thought a daily on tablet would be a different reading experience and wouldn’t compete but we understand now that they were competing for time, along with all the other daily sources of news.”

Charalambous says he believes there is a room in the market for a quality local weekly with high quality analysis and opinion and he is probably right. “We can access great international titles but local titles simply don’t exist or don’t deliver the quality coverage they [readers] expect,” says Charalambous.

Charalambous says there won’t be any editorial cutbacks, “although the production process will obviously be scaled back from what needs to be subbed and how many pages we need to layout and design each week.”

The first weekly edition will appear on Wednesday 4 July and be published every Wednesday thereafter.

It would be interesting to see if the iMaverick team will be upping the design stakes on their new weekly product by giving it magazine quality lay-out – at the moment the daily looks (but, I reiterate, doesn’t read) like a terribly long and unimaginative PDF file.

Charalambous says the circulation has been closing in on 5000 but he hopes to announce “two massive deals this coming month where corporates have purchased several thousand subscriptions on behalf of their clients.” It has been a stated aim of the iMaverick team since its launch just over a year ago to find corporate sponsors willing to buy subscriptions in bulk.

Existing subscribers will receive the same number of issues they originally paid for so effectively their subscriptions will last longer.

One Response to “Why iMaverick is changing frequency”