by Herman Manson (@marklives) The Ogilvy Digital Marketing Academy (ODMA), an educational initiative between Ogilvy and lecturer and digital strategist Dave Duarte, has celebrated its first year of contributing to the “geekification of the ad industry,” as Duarte had joked it would do when the academy in its current form was first launched in early 2011.

Initially developed as an in-house course for Ogilvy in Cape Town, the academy has grown into a separate business, with its own offices in Sea Point from where it co-ordinates training in digital marketing to Ogilvy offices around the country.

Although ODMA is open to training staff at any agency or client, the demand from Ogilvy offices has been such that it has not had 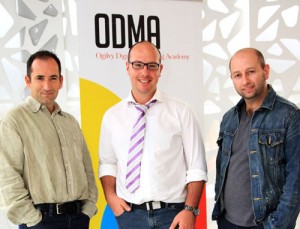 capacity to deal with these requests, admits Duarte (@daveduarte), who says the academy has also generated intense interest within the global Ogilvy network.

A solution to capacity problems might be e-learning, which is a radically different course to the current intensive seven three-hour workshops across seven weeks, held face-to-face with batches of agency and client staff.

Duarte believes the success of ODMA is apparent in the transformation of Ogilvy Cape Town’s digital reputation – primarily due to the engagement of staff, often former ODMA students, with digital platforms through Twitter feeds, blogs and entrepreneurial enterprises which launched as course projects but managed to take on a life of their own.

Students are encouraged to launch and conceptualise projects in what Duarte refers to as ‘whitespace thinking’ – where learners are encouraged to think beyond their fields of expertise or knowledge. The course has become a platform allowing peoples’ creativity to emerge, says Duarte.

Former students that have achieved success here include Ivan Colic with his infographic site Afrographique and gaming community 2upGamers. The ‘Heart Gingers‘ campaign for Stimorol gum also originated through the ODMA.

Duarte says the focus of the course is on building internal soft digital skills (rather than hard coding for example) that boosts digital awareness throughout the agency and client organisations. This has already resulted in multiple digital award wins for Ogilvy. Hard skills will be brought on board next, as required.

Duarte says discussion in class, around injecting more innovation into advertising, suggests marketing in safe forms of media should today probably take up 70% of an agency’s resources, while 20% goes into edgy marketing and around 10% goes to digital and transmedia storytelling.

Duarte admits that, as a digital evangelist, he believed digital media was displacing other forms of media, but he has since tempered this view and concluded successful marketing communications rely rather on harmonising media to work together as seamlessly as possible.

The focus of ODMA is to acknowledge that the place of individuals is in the centre of their own world, from where they can access advertising on demand and explore as deeply as they care to.

Initiatives such as “How To Friday” – which is run internally at Ogilvy Cape Town and invites guest speakers to talk about what is happening in communication – make an agency less self-contained and move it closer to broader collaborations, says Duarte, while revealing the potential for resourcefulness, skills and abilities amongst participants.

Duarte says ODMA’s mission to increase digital expertise in the ad industry will hold positive outcomes for media freedom as advertising moves towards this medium.

Clients and agencies need to collaborate closer than ever for their communication strategies to succeed, says Duarte, and the ODMA courses, with their mix of agency and client staff, aim to build a solid platform for these partnerships in the future.