by Herman Manson Ogilvy & Mather Worldwide has announced the rollout of Social@Ogilvy (@SocialOgilvy), a unit that promises to deliver social media solutions to Ogilvy clients, and which will operate across numerous marketing disciplines such as advertising, direct marketing and public relations.

The new unit promises to offer brands a broader and more strategically integrated approach to social media than has previously been the case, 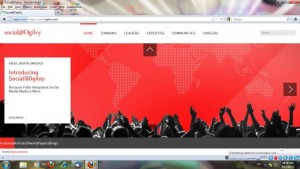 or it claims, can be offered by specialist social media agencies.

The new unit builds on Ogilvy’s global social media capabilities, much of it derived from a speciality offering housed inside Ogilvy Public Relations, into an international network of 550 dedicated social media experts and another 4000 digital experts across 35 markets.

The new practice is also being introduced into Ogilvy’s South African operations, with the local team headed by Joanna Oosthuizen (@joopr24), MD of Ogilvy PR, and Amanda Sevasti Whitehouse (@AmandaSevasti), social media account director, both in Johannesburg, and Gavin Levinsohn (@gavlevie), MD of Ogilvy Cape Town in the mother city.

“The headline here is that it’s a worldwide practice that connects all the agencies,” John Bell, the global MD of Social@Ogilvy, told the New York Times’ Media Decoder blog yesterday, Monday, 13 February 2012. Media Decoder reports that Bell believes that integrated social solutions matter because, by some estimates, brands will spend as much as 18% of their total marketing communications budget on social media within the next few years [in developed economies, at least].

Whitehouse says Ogilvy South Africa has seen an increase in the demand for social strategy solutions by clients since mid-last year, so much so that demand now goes well beyond simple ‘community management’ (managing brands’ social media platforms such as their Facebook or Twitter pages) to solutions integrating social media properly into the broader marketing mix.

Social@Ogilvy takes a traditional agency into the social space and gives social media an upfront mandate to be part of brand strategy discussions. Whitehouse says Ogilvy’s SA social team are already being pulled into pitches and brand strategy planning for 2012/13.

The SA market isn’t yet as sophisticated as some markets in developed economies but there is a genuine interest in social media amongst SA brands, says Whitehouse. Even while some brands are only testing the water right now, others – especially in the FMCG sector – are quickly becoming comfortable with social media as an integral part of their overall brand strategy.

The opportunity in social media does not reside in controlling the message but in being more accountable to consumers, says Whitehouse. If they take the trouble to engage with a brand, brands owe them engagement in return.

Ogilvy in SA has been lauded for its commitment to integrating digital skills companywide. Last year, it launched the Ogilvy Digital Marketing Academy (ODMA), first in Cape Town, but later expanded into Johannesburg, under the leadership of lecturer and digital strategist Dave Duarte (@DaveDuarte).