by Herman Manson A small Cape Town agency has just taken the Spur account and brought on board the former executive creative director of Draftfcb – Francois de Villiers. Haas Collective is a creative collective run by Mike Orrey, one of the founders of Orrey, Rightford & Drysdale Advertising (ORD Advertising) and Glynn Venter, a former ECD of the Draftfcb through-the-line studio.

Haas Collective launched in March 2011 and consists of a concept store, a design gallery and a high-end coffee house and roastery, as well as the agency, all tucked into two buildings across from one another in Rose Street in the Bo-Kaap.

It quite literally is a collective of small creative spaces and businesses that collaborate when need be. Wallpaper magazine recently voted the 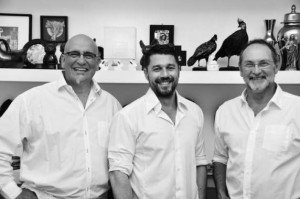 space one of the top 20 reasons to be in South Africa.

Different people are involved in different aspects of the collective. For example the gallery is managed by Francois Irvine and Vanessa Berlein, while the agency consists of Venter and Orrey and now De Villiers.

Venter helped start the various businesses as the right partners came along and didn’t initially plan for them to feed off one another to the extent that they do – but, today, the concept store readily ties in with the gallery which ties in again with the agency – all in all, the design collective represents 50-60 up-and-coming designers and illustrators which any of the businesses can call on as required.

Haas Collective also collaborates with Draftfcb on Johannesburg on parts of the Old Mutual account. It won the Spur account in mid-January 2012 and will take up the account 1 March.

According to De Villiers, he decided to leave Draftfcb late last year; he had been with the company for 17 years. At that stage, Draftfcb had already lost the Spur account. Spur founder and executive chairman Allen Ambor and he had such a good relationship, says De Villiers, that he decided he would want to continue their working relationship, if possible.

To this end he was accommodated by Draftfcb, and after a pitch for the Spur business with his new partners at Haas, they duly won the account. De Villiers joins Haas on the same day the Spur account becomes active – 1 March (Mike Barnwell will be replacing De Villiers as Draftfcb Cape Town ECD).

The account win has lead Haas to appoint Nick Barr, ex-group account director at The Jupiter Drawing Room, as account director, who will eventually be mentored into an MD role; a new account executive; and a copywriter. For the rest, the agency works on a collaborative model, bringing in a wide range of experts, as and when required.

De Villiers says the collaborative model allows Haas to step around the numerous middlemen big-agency operations layer between the creative decision-makers and the client decision-makers. The specialists the agency use, be they photographers, CRM specialists, or directors and producers, include the best in their areas.

Those collaborators have their own trusted suppliers, and so the model ripples out to the advantage of the agency and its client, with best-of-breed relationships in place all along the production chain.

Venter says the other businesses in the collective keep the agency close to consumers. For Orrey, the advantage of shared space is keeping a lid on costs in a tough economy – something that ultimately benefits clients as well.

And the roastery holds other benefits, too – the agency has picked up work just from Venter getting to chatting with customers downstairs. Which lets the customers upgrade from the coffee shop to the plush lounge style room upstairs from where the Haas agency operates – of course, with some great coffee to go.