by Johann Schwella The new poster released by the Democratic Alliance Student Organisation (DASO)has, to put it mildly, caused a stir. Many commentators have quoted race, sex, and countless other reasons as to why 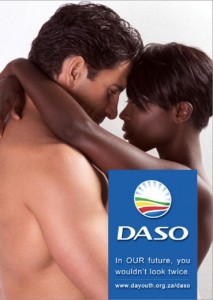 this is a good or a bad advert. I’m going to try and stay away from the obvious ‘traditional’ South African tensions and dissect this from a brand and advertising point of view.

Firstly, let us look at Brand DA. The DA has gone to great lengths to sell itself as an all-inclusive, equal brand that avoids controversy, ignores racial lines and targets supporters of all creed and colour. It’s very much evident in their most recent election campaign slogans “Service Delivery for ALL.” The focus being on ALL. This viewpoint is constantly reinforced by Helen Zille, arguably the party’s most vocal mouthpiece. To avoid drawing negative attention to the party, Zille, and by extension, the DA, has been reluctant to get involved in petty racial debates for the sake of debating.

Furthermore, the DA, as analyzed by local strategic design agency, Coley Porter Bell, in their “Visuals Futures” project from 2009, has been using international design trends of Hope and Optimism to spur their extended stance of equality and inclusivity.

With this in mind, let’s look at the piece of communication that was produced:

The poster features a semi-naked inter-racial couple in a suggestive embrace with the tagline – In OUR future, you wouldn’t look twice.

Obviously a piece of communication that was distinctly made with the mission to shock. Or to “get young people talking” as the DASO admits. This intention to shock implies that the DASO believes that the majority of viewers are not comfortable with the inter-racial image and de facto implying that we are all mostly racists (and they are not), thus proving their point of a split and racist nation and hence why the DA is required – in my view a self fulfilling prophecy as well as one about 15 years too late.

So why is this wrong in an advertising context, and why is it wrong in a Brand DA context?

Media and Advertising agencies have unprecedented power over the masses, and its ability to influence both our values and our viewpoints is an extremely potent and profitable one. Their main product to their clients is to influence the public to make certain choices and have certain opinions, and they get paid to do this every day. As such one of the top creative directors I worked with in my career said “It’s our job to inspire the world through creativity to get people to consider our clients products.”

This advert does not inspire. In fact, it does the opposite – it further polarises. You just have a look at the close to a thousand comments on the image, defeating the purpose of good advertising.

This advert has belied the crux of the brand that the DA has been building for years. Pushing a campaign that is sensationalist and attention-seeking in its thinking and in its execution, reeks of ANCYL tactics. We are a country with problems, we all know that, but instead of focussing on the problems (AIDS, crime, etc), how about we focus on the good and extend that to give a message of hope? – One that Brand DA has been pushing all along.

A simple way to have avoided all the minefields would have been to show an inter-racial couple holding hands, or a inter-racial group of friends drinking beers together, with a tag line reading “A nation working together is better for ALL.” Still not a great ad, but at least not shaking the tree to see what falls.

When attempting to affect change, it’s easier shock than to inspire, but where would we be if everyone took the easy road.

— Johann Schwella is the co-founder of 10and5.com where he has been showcasing and curating South African creativity for over 4 years. Johann has also spent the past six years working in and is currently employed by 140 BBDO. Image Source: 10and5.com