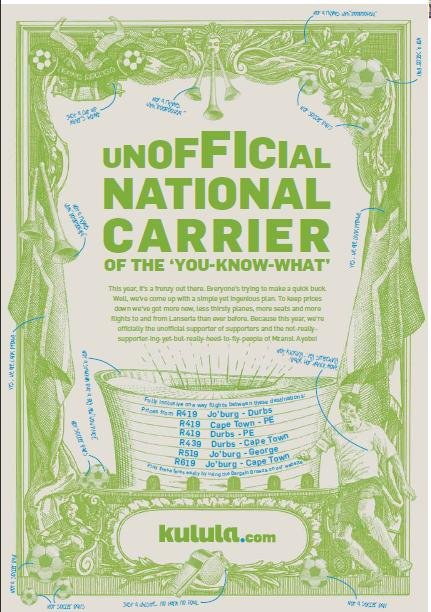 According to Kulula it has been targeted by FIFA for its ad on being the ‘Unofficial National Carrier of the ‘You Know What.” The low cost airline recently challenged other carriers to keep their fares low during the FIFA World Cup in June and July this year.

News broke on its official Twitter account (@kulula) with the following post;  “oh dear letter from FIFA’s lawyers says we broke their trademark of the use of “South Africa” and think our non-WC ad was about soccer…”

Apparently the lawyers are objecting not only to the use of “South Africa” but also to the use of soccer balls and the image of a stadium. Even use of the our national flag was an issue.

It is absolutely outrageous. We have signed over our country, its symbols and our economy to one  ‘Sepp’  Blatter. Nasty.