With Loeries 2009 looming Mandy de Waal asks whether South Africa’s traditional advertising industry is partying at the end of the world. 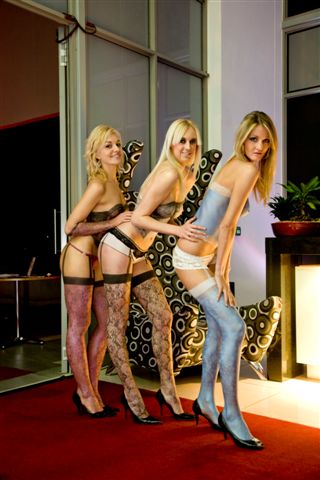 Huge strobes light up the night sky. As I walk toward Young & Rubicam’s roof wetting party (held a couple of weeks ago) it feels a lot more like limbering into a SOHO burlesque club without the comedy or wry intelligence. After passing an albino boa constrictor and fire eater at the entrance, I was met by a handful of nipples.

Bare naked ladies bar slender g-strings covering their modest parts. With erotically painted bodies, they pour cocktails or lean into people to pour shooters into mouths. *A quick chat to the topless tootsies reveal they weren’t told they’d be topless. One says Y&R’s a big agency and you don’t say no to power or people who might book you again.

Behind me a gaggle of dwarves arrive in gypsy satins, ahead jugglers entertain as a number of bands set up for the evening. ‘Liquid chefs’ dazzle with cocktails in one area, but there’s a full bar next to a stage where ladies in lingerie dance.

All that’s missing from this party is a theme tune. Cue Francis Ford Coppola inspired rotor blades chukka-chukking, thrumming and strumming in unison. There’s an eerie silence as dust clouds swirl amid lush palm trees before The Ride of the Valkyries breaks in the background. A dazzling feat of cinematography, the opening sequence of “Apocalypse Now” is forever etched into our collective unconsciousness because of its hypnotic affect and disturbing brilliance in showing the brutality of annihilation. This as Jim Morrison heart achingly moans:

Of our elaborate plans, the end
Of everything that stands, the end
No safety or surprise, the end
Ill never look into your eyes…again”

Traditional advertisers are facing their own ‘apocalypse’, it’s just that many haven’t quite realised it. As the local creative village prepares for the Loeries, our own party at the end of the world, it appears traditional advertisers are blissfully unaware of impending doom. The rotor blades are already being heard on the horizon but the boys are partying up a storm. I say boys because at Y&R the tits and ass were strikingly symbolic of a masculine construction, a relic of a bygone era. A time when advertising was a creative hedonism divorced from the bottom line. When agency bosses and CEOs played golf, chewed cigars and swooned over creative awards.

But there’s blood on the dance floor. The global recession and market melt down has brought an ice age that has frozen credit and shrunk consumer spending. Then there’s the rise and rise social media, the proliferation of mobile and other mediums that directly influence consumer behaviour alongside the unbridled growth and sophistication of search marketing. Each one a clear indicator that “this is the end, beautiful friend”. The traditional model advertising is starting to die, and as it does the tit and ass routine only smacks of denial.

With party plans for the 2009 Loeries nearing completion Herman Manson and Mandy de Waal of MarkLives and MandyLives ponder the apocalypse. We’ll look at the relics, dinosaurs, denial and other death knells of a pending catastrophe. But also focus on the remarkable innovations and mavericks already challenging and changing the advertising world.

Loeries 2009 – Apocolypse Now! Catch all the insight, action, and drama as Cape Town hosts South Africa’s party at the end of the world.

* When questioned, Michelle Cavé, Group PR Director of Young & Rubicam Brands SA advised that the outsourced supplier who provided talent for the party was briefed to ensure the models wore latex nipple caps and were body painted. Says Cavé : “This is the first that I have been made aware of the issue that the shooter girls we hired for our roof-wetting party were not briefed that they were going to work topless. At no point was this brought to my attention even after several queries I made with the girls on the night to ensure that they were happy and comfortable. The brief to our supplier who sourced the girls was to have body painted models serve drinks to our guests, which is what we got.”

Part 1 of our special Loeries coverage. Check back daily for new stories.