The multi-channel book of the future (today) 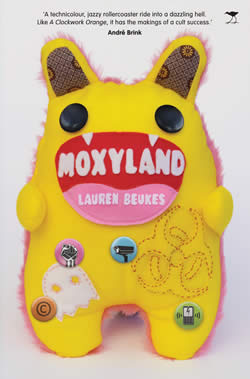 Lauren Beukes is a much admired journalist who has just released her futuristic debut novel, Moxyland, that plays out in Cape Town and is in her own words a hi-tech fable of the day that “corporate apartheid separates the haves from the have-nots.”

But the really interesting aspect of this publishing venture is the multi-channel approach Beukes took in marketing the book. Apart from the printed title and an album, she also produced an e-book, filled with hyperlinks, electronic bookmarks and even the soundtrack compiled in close collaboration with African Dope to suit the dark and gritty mood of the novel. The compilation, available in music stores and from online e-tailers features the likes of The Tone Deaf Junkies, Taxi Violence, The Real Estate Agents, Mix n Blend, Dank, Mr Gelatine and Jacob Israel.

Beukes even set up a women’s empowerment group in the Klein Karoo to create the cuddly toy that features on the book cover, and which is hand-sewn by the women the project employs.

“Writers have to think about multimedia, about finding ways of elaborating on their story,” says Beukes. “The world we live in isn’t limited to one format. It’s not about flashy gimmicks, but playing with possibilities. I’ve been incredibly lucky to find brilliant and innovative creative partners who were willing to run with a crazy concept.”

Beukes seem to have taken all the lessons from the Internet publishing and applied them to a very traditionally minded industry. The fact that a South African author have stepped so far beyond the expected is exiting for the local publishing industry and an indication of the resourcefulness of a writer well familiar with the opportunities available to somebody who won’t be bound by the status quo.

3 Responses to “The multi-channel book of the future (today)”