#AgencyFocus: The business impact of Retroviral

by Sabrina Forbes. Retroviral’s manifesto speaks about “brave business, brave brand, and brave heart” and explain how it “vow[s] to throw rocks at the stagnant pool of digital comms, punch brands in the gut of their crippling conservatism, and throttle the breath out of mundane and mediocre marketing”. The digital communications agency believes that “disruption can only ever be derived from differentiation” and that “talk is cheap [but] so, too, is unimaginative social media”.

Almost nine years ago, one of the first influencer marketing agencies in the country was born. What started out as a niche, social amplification play has evolved into an award-winning digital creative agency whose work has not only gone ‘viral’ myriad times but created solid commercial success for its respective clients. Led by its founder, Mike Sharman, Retroviral was already generating hundreds of thousands to millions of social views in 2010 by creating what he calls a “sticky factor” for content. Today, Retroviral makes word of mouth spread online for brands using bespoke strategy, online video creation, content seeding, social media, and influencer marketing.

“Virality for us isn’t just a buzzword. It’s about an impact that [leads] to a sale. It actually [has] a business impact,” he says.

It was from its fifth year in business that Retroviral stopped having one-night stands with clients, successfully converted project clients to retainer. From 2015 to 2018, the agency experienced 1000% increase in retainer income. Then, in 2016, it had its watershed moment when it was awarded lead creative agency for both RocoMamas and Russell Hobbs.

Sharman credits the long journey he and his team took to really figure out who they were as an agency to the success his business is experiencing today. The team consistently works to understand its four core pillars: strategy and content creation take first and second place; marrying the king (content) and queen (audience) with clever dissemination is third; and reporting closes off the loop as fourth.

“We’re obsessed about the dissemination of our content,” he says, explaining his belief that reporting in our industry is broken and that agencies tend to be scared to look at what they’ve achieved. For him, setting metrics with honest clients is most important. “Calls to action are our objectives as agencies,” he shares. 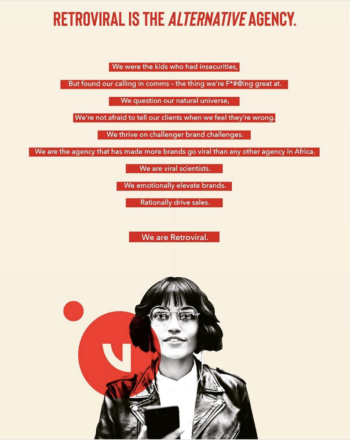 Sharman believes his personality works best with clients willing to look at counter-culture and take risks. “People know very quickly if my personality is going to work for them or not,” he says.

He wastes no time in explaining that what his business is good at is working with the #3 and #4 brands in their respective industries; he doesn’t covet working with leading brands. For him, Retroviral is a disrupter agency suited to disrupter brands —the alternative agency.

Sharman’s top trend for 2019 is the creation of behavioural change. In June 2018, Retroviral launched “Liberty Lives”, an internal system for Liberty staff members that gives them login-controlled access to podcasts, videos, information, training programmes etc. It’s been well-adopted — 3000 people currently log in , even though there are a number of security hoops to do so — and shows that, by providing relevant content and giving employees an entertaining incentive platform, the knock-on effects may be huge.

Retroviral’s work for Russell Hobbs, which made it onto Top 10 ads of the week on AdsoftheWorld, cleverly uses only the sounds made by using the range of appliances to create the TVC soundtrack. The strategy was to show the breadth of the brand and educate consumers that it does a lot more than just toasters and kettles.

Since Retroviral took over as lead agency for RocoMamas, its first campaign for the brand, #ElectionBurger, showed the virality of using current affairs in a creative way to generate consumer engagement, which in turns generates sales. The campaign reached 14m people online alone and increased RocoMamas’ year-on-year sales by 20%.

As the head of Retroviral and unofficial ambassador for his clients’ brands, Sharman has experienced the influx of communication on all fronts. “As a leader, there are more channels to be contacted on, especially with the technologically advanced clients we have,” he says. His team runs internal and external communications through traditional channels such as email and the like but finds that WhatsApp is the quickest route to dump thoughts, share ideas, send references, and find inspiration 24/7 — in the age of social, having a WhatsApp group with the founder of RocoMamas to get feedback in real time is an important strategy, especially for a brand that monitors Twitter live 20 hours a day.

The potential for burnout is massive, and growing. “We live with more clutter than ever before and, as humans, we haven’t kept up with the pace we’re creating the technology,” says Sharman. To survive in a world drowning in content, he believes his super powers to be the ability to remember names and faces, and to make sense of a lot of information very quickly: “I can retain and distill information easily and can take as much information as I need from all platforms and then create the most-valuable output for my clients. I love that we get to make money by being creative. It’s the ultimate drug. It keeps me ticking.”

When asked how he first priced Retroviral in the industry, Sharman admits that, even though it was a young small business, it launched and pitched as a medium-sized one. This way, as it grew, it didn’t need to raise its prices to keep up. While he will admit he’s not good with details, he chose a strong finance partner to take care of that part of the business. The tight financial processes mean it’s a smarter business today, and potentially into the future.

In June 2018, a 51% stake in Retroviral was bought by Shaka Sisulu, entrepreneur, businessman and founder of Plum, another digital and social media agency. This has raised Retroviral’s empowerment status to BBBEE Level and the two agencies work in tandem.

All 16 Retroviral employees are seen as partners, too, with Sharman taking his experience working at Black River FC in 2010 as a springboard for creating his own agency culture. People are inherently very different and he wants everyone to have the freedom to share what they feel and believe. His culture is that of autonomy with accountability. “Different people bring the best of the strengths of their own shit to the mix,” he says.

As an entrepreneur, Sharman has experienced the highs and the very lows — and written a book about it, too. It’s a lonely journey where you’re always expected to be on your A-game, even though your friends, family, and colleagues might not understand how difficult creating this perception can be. In saying this, he’s kept ticking and inspired by his journey and isn’t about to stop now. “We’re all a little bit f*cked up; that’s why we’re in this industry,” he says.