“Constraints can offer fertile ground for innovation as catalytic forces that stimulate the ability to make us more than we were before, rather than less than we could be.” —Adam Morgan and Mark Barden, A Beautiful Constraint (2015)

by David Blyth (@dvblyth) As a nation, we find ourselves in precarious circumstances. But constraints don’t have to be treated as insurmountable barriers.

We still have six months of 2020 to navigate, despite the emotional (and unrealistic) calls to ‘cancel 2020’. We have been, and will continue to be, constrained in the limitations on our freedom of movement, in access to and availability of resources, in safety and security, and in time as we navigate squeezing more into our (ab)normal lives.

Yet navigating constraints is how we South Africans operate. We’ve been finding new ways to deal with our circumstances through our uniquely South African character to make a plan, vasbyt, and apply the spirit of Ubuntu. True challengers, South Africans have a knack for making more from less. And so now, despite the factors beyond our control and the cynicism that surrounds them, we can take back control through one of our greatest assets: our state of mind.

Applying the lessons from challenger thinking is one way we can go about this. There are five characteristics of this thinking that we believe South Africans show in abundance that will help us get through not only this covid-19 crisis but also broader systemic issues that shape the everyday experiences of the majority of South Africans.

#1. We have an unreasonable ambition and appetite for growth

While some naysayers might argue otherwise, South Africans are an enterprising bunch, finding innovative ways to overcome traditional constraints and identify opportunities for growth.

Have a look at Droppa, an on-demand platform for trucks and bakkies. Besides attracting multimillion-rand investments in its business, the web platform and app has grown to 300 drivers and has larger ambitions to expand its operations in the Western Cape and Gauteng, as well as Durban and Port Elizabeth.

Yoco is also a clear case of vast ambition. The point-of-sales payments startup aims to double its customer base from 50 000 to 100 000 this year, after having secured on of SA’s largest venture-capital deals of US$16m in 2018.

#2. We don’t settle for mediocrity

We South Africans are not shy about voicing our dissatisfaction with the status quo, constantly pushing boundaries and elevating standards of excellence.

Look, for example at Lady Skollie, one of our most-outspoken activist-artists. Through a variety of media, she tackles topics that many others skirt, such as sex, pleasure, violence and abuse, and, in the process, has been highly awarded for defying these taboos.

Also look at Netflix’s second African original series, and one of South Africa’s own, Blood & Water. Within a week of its debut, it trended as Netflix’s #1 series in eight countries and retained a top-10 position in another five countries, taking its rightful place as a leader on a global stage.

Whether it’s a response to lockdown or to systemic challenges in SA, individuals and organisations have found ways to overcome constraints in novel ways.

Consider Discovery’s online doctor consultations in partnership with Vodacom that ensure maximum reach and service continuity during the lockdown.

Also in healthcare, Iyeza Health started as a single entrepreneur on a bicycle helping collect and deliver medication to residents of informal settlements. It offers a way to enhance access for those who don’t have the money, time, energy or transport to collect medicine from public health facilities.

#4. We’re brave in the face of opposition

One thing South Africans are really good at is laughing at ourselves and using humour to make light of tough times. Take, for example, the ceremonial brass band parading to Tops at Spar as the lockdown alcohol ban was lifted.

We also see the celebration of humour in Savanna’s Virtual Comedy Bar, set up to keep its brand salient while supporting SA’s young comics.

Yet at the same time, we’re are eady and willing to fight for our freedoms. This especially evident in the fire that burns in SA’s youth. Our youth have showed bravery in the face of injustice, be it the uprising in 1976 which we commemorate this month, the nationwide shutdown of universities during #FeesMustFall in 2015, or the continued pressure being mounted on government to address gender-based violence.

#5. We push communities and societies forward

While there are still many challenges to overcome in our country, we have an undeniable spirit of Ubuntu that drives us to take care of one another despite difficult circumstances.

Take a look at Lumkani, a social enterprise founded in 2014 that manufactures heat detectors to help decrease the risks of fire in rural and urban informal settlements. The organisation has since partnered with Hollard to develop the world’s first hardware-enabled fire insurance specifically designed for informal settlements.

Also consider Pelebox. Through a unique smart-locker system, the organisation has increased SA’s access to medication by reducing the average collection time for patients from an average of 3.5 hours to 22 seconds, thereby addressing a key step in the value chain.

We as South Africans have what it takes to take on this situation. Let’s embrace our DNA and let it live out loud in the face of these difficult times, and keep living with our challenger spirit.

Rhiannon Rees and Tumisang Matubatuba contributed to this article. 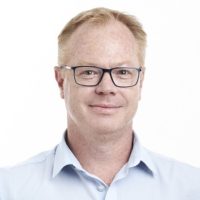 David Blyth (@dvblyth) is an experienced strategy practitioner, with over 27 years global and continent-wide experience in leading significant brand, insight, marketing, people, research and technology projects for large organisations across more than 20 countries. Un September 2018, he founded Delta Victor Bravo, which represents strategic brand consultancy, eatbigfish, and The Challenger Project across Africa and the Middle East.