Q5: The science of brand memory, with Hamish McPharlin [interview]

by Carey Finn (@carey_finn) Hamish McPharlin (@hamishmcpharlin), BBC Global News head of insight, talks us through the key findings of a study on branded content, called “Science of Memory”. Using neuroscience techniques, the 2018 study explored how emotions affect memory — and what this means for brands.

Q5. Tell us about the study: how, why and where was it run?
Hamish McPharlin: Science of Memory is a thought-leadership study from BBC Global News. The study explored the ways in which emotion works in branded content to stimulate long-term memory and revealed new insights into how to harness this for enduring brand impact. BBC has previously demonstrated how emotion is key to brand uplift in branded content. However, what hasn’t been known is the extent to which this emotion drives memory of that brand over time, allowing appropriate recall at time of purchase.

Science of Memory took the methodology of our emotion-testing studies and combined it with the latest neuroscientific techniques in measuring long-term memory. The result was a side-by-side view of how emotion and memory work together. Six brand-films created by BBC StoryWorks were tested with over 2 100 test subjects in four markets (US, Germany, Australia and Singapore). The study produced new insight into effective storytelling for optimal memory impact, including the pacing and positioning of emotional spikes, best use of cinematic techniques and brand integration, and appropriate emotions to use in proximity to the brand reveal. The research has allowed BBC Global News to ensure that [its] branded storytelling is optimised for maximum impact, and has established the company’s reputation as master storytellers.

#3. Frequency of emotional peaks — more is better: We looked at memory performance benchmarks of over 400 advertising content tests and, through our analysis, we were able to produce a rule that a 3–5 min brand film that triggers 10+ emotional peaks can expect to benchmark in the top 25% for memory performance. For content makers, this is a useful guide for effective narrative design.

#5. Emotion precedes memory: One of the most-fundamental findings that emerged was the discovery of a particular pattern: a key moment of emotional intensity often causes a rise in memory encoding shortly afterwards. There is roughly a five-second gap between the two events. Essentially, an emotional moment is followed by a window of opportunity for getting something into memory. This finding has interesting implications for the timing and positioning of “brand” moments in the narrative.

Q5: What do these findings mean for brands?
HM: Branded video is a fast-growing area for advertising; however, campaign effectiveness tracking focuses on basic metrics such as reach, impressions, VTRs and dwell-times. Advertisers are keen to explore these richer (but more-expensive) formats; however, the industry is not supplying them with richer data that is reflective of the deeper impact of bespoke branded content. Science of Memory is significant because it not only demonstrates the value of branded content (creating a compelling case for its usage that unlocks the potential for significant takeup), but also reveals a blueprint of best practice that content-makers and advertisers can use worldwide.

Q5: Could you give us 1–2 concrete examples of how brands can create positive long-term memories among consumers?
HM: Example 1: Positioning the brand reveal for maximum memory (Mini)

One key finding was “emotion precedes memory”. The brand film “Roads” for Mini showcased how this principle can be used for creating memory of the brand. We were able to show that a key moment of emotional intensity (such as depicted below) drove consideration of the brand, but it worked because the brand reveal was positioned a few seconds after the emotional peak, when memory is at its highest: an elegant integration in which the viewer sees the brand logo on the steering wheel of the car. 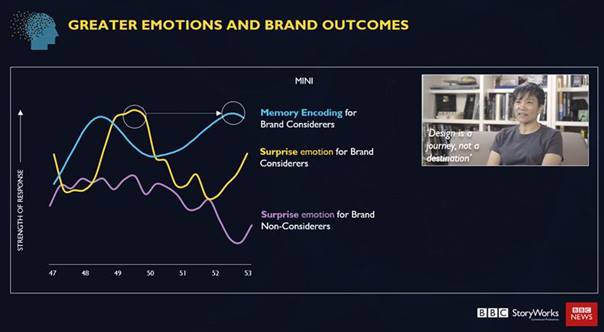 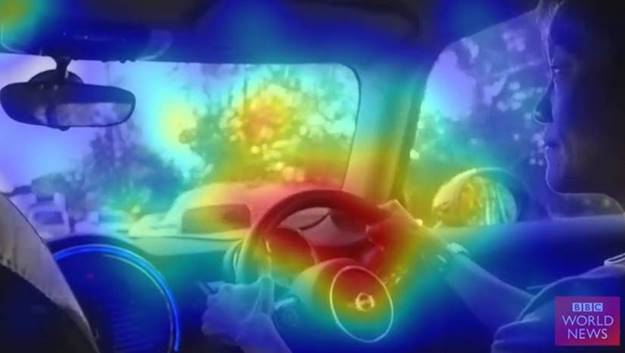 Our research consistently shows that personal stories have emotional impact. If you want to tell the story of a place, tell it through the eyes of a character. The character allows us to create that empathetic emotional connection. We produced a film for Brand South Africa on Laduma Ngxokolo, the South African knitwear designer and founder of Maxhosa brand. The intention of the film is to inspire investment in South Africa. A significant moment in the film was exploring Laduma’s knitwear origins through his relationship with his late mother. This created a strong emotional response that triggered significant memory of the brand film. Ultimately, the film delivered strong KPIs, such as a 350% increase in a subconscious association with South African entrepreneurship, and a 167% increase in desire to invest in South Africa. 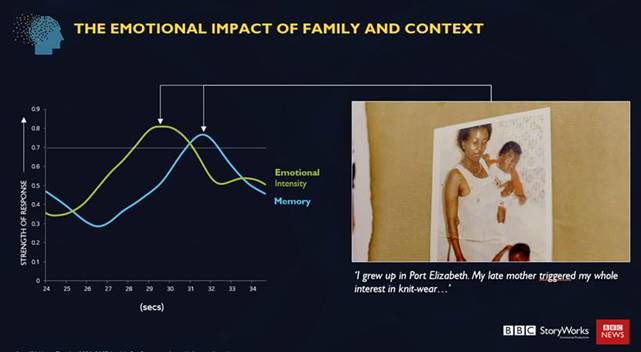 Q5: Were there any unexpected findings in the study? Any interesting surprises?
HM: “Emotion precedes memory” was a surprise. We weren’t expecting that there was a delay effect between an emotional event and the onset of memory encoding. However, it does make sense in retrospect. Understanding it is a very useful lever for branded content storytelling. We also found that emotion is best-served early. Rather than build[ing] towards a climax, you need to engage people right away. This then “warms the engine” to allow a much-higher emotional and memory response across the whole piece of content.

Carey Finn (@carey_finn) is a writer and editor with over decade and a half of industry experience, having covered everything from ethical sushi in Japan to the technicalities of roofing, agriculture, medical stuff and more. She’s also taught English and journalism, and dabbled in various other communications ventures along the way, including risk reporting. As a contributing writer to MarkLives.com, her regular column “Q5” hones in on strategic insights, analysis and data through punchy interviews with inspiring professionals in diversive fields.