by Rohan Reddy. There’s proof that Africa is not only the Cradle of Humankind but the Cradle of Creativity. However, for much of known history, it has found itself at a crossroads: either follow the paths of economic progress towards the first world or the paths of culture.

Most westernised countries don’t have this quandary, as they seem to have found a way to marry both these paths quite successfully. Japan is a good example. But, here in the 21st century, Africa is still constantly playing catch up — economically, culturally and creatively.

The reasons for this include centuries of colonialism, forced oppression and deliberate eradication of cultures, as well as widespread corruption and capitalism and the denigration of culture. Yet, there was a time in Africa when it was the complete opposite. The brief story of Blombos Cave is one of only hundreds of thousands of untold African milestones.

Until recently, most of the world believed that our development as creative beings was solely a product of Europe and its ancient inhabitants. The Venus of Willendorf figurine from Austria, the El Castillo cave paintings in Spain and the Lascaux cave paintings in France were long regarded as among the first evidence of a time when humans moved from being primal hunter-gatherers to members of a conscious species capable of creativity. As it happens, Blombos Cave suggests that, around 50 000 years before these findings, a giant leap for humanity was happening in the southern tip of Africa.

Cut by waves into a steep cliff about 300km east of Cape Town, Blombos Cave (discovered in 1991) has been a veritable treasure trove for anthropology illuminating what we know about the birth of human creativity. Its inhabitants were the first humans to truly develop an artistic culture.

First, Prof Christopher S Henshilwood from the University of Witwatersrand and his team found a collection of perforated shells dating back to 76 000 years ago. Some suggest a stone-age woman would have made these to adorn herself with. The 41 shells are punctured with 1cm holes, suggesting they were once threaded with an ancient string to make a necklace.

Other finds which indicated a relatively advanced Blombos culture include ground and polished animal bone tools dated to more than 80 000 years ago. This suggests technological advancements that would only show up in Europe and the rest of the world many thousands of years later, when modern humans spread across Europe only around 40 000 years ago.

Another Blombos Cave treasure are two small iron-ore stone flakes with intersecting lines of red ochre pigment, presumably made with a prehistoric ochre crayon with a tip of between 1mm and 3mm thick. Ochre is a red iron oxide occurring naturally in rocks and earth, and was used by our earliest ancestors as a colouring pigment for body painting. In Blombos Cave, archaeologists discovered hundreds of lumps of this ochre material, including pieces which had been ground into crayons like the ones used on the stone flakes, their honed points suggesting they were made for design purposes.

Henshilwood and his team’s findings on the 73 000 year-old drawing were first published in the acclaimed journal, Nature, on 12 September 2018. The discovery suggests that symbolic communication and the development of language could be over 30 000 years older than previously thought. This abstract crosshatch design vaguely resembles a modern-day hashtag. Was this humanity’s first attempt at writing? Or was it merely artistic exploration? Either way, it was our first piece of graphic design.

Blombos Cave and the findings in it might not mean much to most people, but consider that the smartphone you’re scrolling through, that image you’re beautifying on Photoshop, that necklace you’re ordering online, that mouse cursor you’re moving to click to the next story might not have been here today if it weren’t for these super-humans living in a cave in South Africa so many thousands of years ago.

Until the lion learns how to write, every story will glorify the hunter. —African Proverb 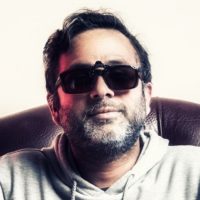 Rohan Reddy (IG: @rofotoqoto_) is the head of creative for FCB Connect at IPG South Africa, with responsibility for curating the creative product of the group’s affiliate agencies in Africa, particularly for clients and brands with a global footprint or a presence in markets across the continent. Highly respected as both a leader and a creative, Rohan has more than two decades of experience working on some of the world’s biggest brands at agencies in several African countries. African Echo seeks to unpack markets in Africa, highlight business opportunities and share insights into what works and what rebounds.