Have you listened to Jacaranda FM lately?

by Kim Penstone. That’s the question that Kevin Fine, Jacaranda FM general manager, is asking in his bid to change the way that South Africans view the award-winning, Gauteng-based, Pretoria-stronghold radio station.

With over 1.1m listeners across Gauteng, Limpopo, Mpumalanga and the North West Province, and a growing base of over 295 700 Facebook fans, 338 000 Twitter and almost 14 000 Instagram followers, the station has long-since broken ranks with the stereotypical white Afrikaner who defined it for so long, he says, and has its sights firmly set on owning Gauteng’s hotly contested airwaves.

The move began in earnest in February this year, with the launch of the station’s “More Music You Love” positioning, a brand stance that Fine believes is gaining traction and is set to knock the once-indomitable 94.7 off its perch. #MoreMusicYouLove showcases not only Jacaranda’s focus on playing music that makes South Africans smile but also the station’s creativity and forward-thinking attitude when it comes to advertising. In this way, it plays a dual role: talking to both potential listeners and potential advertisers.

As it stands, the Jan–Jun 2017 RAMS show 94.7 sitting at 6% share of the Gauteng audience, vs Jacaranda’s 5%, while Jacaranda had managed to sneak ahead of 94.7 at 6% to 94.7’s 5% share in the previous term. Jacaranda actually has a higher share of the province’s listening minutes, measured at 7% in Oct– Mar and 6% Jan–Jun, vs 94.7’s 4% share. And the station boasts a 44% exclusive listenership, people who listen to the station for an average of 2 hours 12 minutes every day. This is an increase from a 38% exclusive listenership with an average of 2 hours per day, according to the Jan—Jun 2016 RAMS. (For details, go to the Broadcast Research Council’s Radio Research page.)

The listenership is also not what one might expect, although it is impossible to really quantify if it’s changed over the past couple of years, due to the inability to compare the so-called Old RAMS to the new incarnation. But the gist is this: the white/black listenership is currently sitting at 65/29, while the English/Afrikaans split is 22/52, with listeners fairly equally spread over the age groups. “We believe in the power of music; it makes up 80% of our content and we have invested heavily — very heavily — in ensuring that we provide the kind of music our audience loves to hear,” says Fine.

Indeed, the August 2017 RAMS presentation points out that music is the primary reason South Africans listen to music, with 83% of listeners tuning into music and 35% reporting that they listen to music most often.

Last year, the station employed the services of a best-of-breed global consultant to help create a mix that, among other variables, takes into account the changing population demographics, music tastes across the generations, and the best combination of new vs familiar sounds.

The result is what Fine refers to as his “secret blend of 11 herbs and spices”, a musical style that allows listeners to enjoy a mix of modern and heritage songs from across a wide variety of musical genres that simply can’t be found anywhere else. It’s music that people recognise, that they can sing along to, that makes them feel happy and connected.

“We’re not in the business of breaking hits, rather in the business of making them,” he says. “Of course, it goes without saying that we match this with talent which has the ability to generate conversation, to keep audiences entertained and to ensure that they feel valued and loved.”

To this end, the station has recently shaken up its all-important drivetime lineup, launching a new (and somewhat controversial) breakfast show starring Martin Bester and Tumi Morake, and welcoming back the award-winning Rian van Heerden to the afternoon slot.

[You would be forgiven for expecting the race splits to shift in the next RAMS, especially in the wake of the recent furore that broke out when Morake compared post-apartheid SA to a bully refusing to return a ‘stolen’ bicycle. Jacaranda has been called to appear before the Broadcasting Complaints Commission of SA (BCCSA) and, aside from press statements that stand by Morake and the station’s “commitment to allow the expression of different viewpoints… to promote important and meaningful discussions, with the intention of building and uniting South Africa as a nation”, station management would not offer any further comment.]

It also has a full-and-growing list of live events, from the likes of the Jacaranda FM Spring Walk, a wellness event held annually in Pretoria; to the Sisters with Blisters walk, which represents the country’s largest collective stand against the abuse of women and children and raises much-needed funds in the fight against gender-based violence in SA; and Jacaranda Day, which is the station’s premier live entertainment event, attracting some of the biggest names on the local music scene.

If you thought Fine were only focused on the airwaves, think again: The powers that be at Jacaranda are more than aware of the power that rests in the digital world, and have invested heavily in ensuring that the station is well-represented on digital platforms across the board.

In addition to the station’s social media followers, jacarandafm.com receives around 1.2m page views per month, putting it in the top three most-consumed radio websites in the country. The station’s podcasts, says Fine, are growing at an average rate of around 25% per month.

“Ready for the future”

And that’s not all. He adds, with a grin: “I’m like one of those ducks, looking calmly at what’s happening above the water surface. But, below, I’m paddling like mad trying to ensure that the station is ready for the future! DAB [digital audio broadcasting] will bring with it massive changes in terms of how we consume radio, as, too, will increased disintermediation. It’s incumbent upon us to be part of the change, and to embrace it, so trust me when I say we are hard at work behind the scenes ensuring that we will be more than ready when the time comes!” 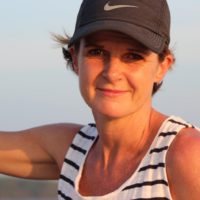 Kim Penstone is a freelance journalist, specialising in marketing, media and advertising. Over the past 15 years, she has worked for a variety of leading marketing industry publications, including Marketing Mix, Marketingweb and Brand Magazine, and in her freelance capacity contributes regularly to specialist titles, such as Brands & Branding, AdFocus and MarkLives. She has recently started a blog, www.runlikeamom.co.za, which is completely unrelated to the marketing industry.

2 Responses to “Have you listened to Jacaranda FM lately?”