by Oresti Patricios (@orestaki) I’m a big fan of digital, social media and viral campaigns that work well. That’s why I’ve decided to award this year’s #AdoftheYear to a campaign that has already made a tremendous impact upon people’s lives, and promises to do more as it continues gathering momentum.

Asking for a donation is a hard sell. Asking people for organ donation is even harder. There’s nothing in it for the donor, apart from the knowledge that — in the tiny eventuality that you are involved in a fatal accident — your body will be harvested for the ‘spare parts’ that will make someone else’s life better.

Statistically speaking, most people will live to a decent old age and die of natural causes, so the Organ Donor Foundation (ODF) needs to sign up a large number of people to be assured of having enough donors for the people who could benefit from a replacement heart, lung, liver, kidney or pancreas. These are the life-saving organs that thousands of people are waitlisted for.

If we count the people waiting for cornea replacements, there are around 4 300 people who are awaiting this type of surgery in South Africa, but less than 600 operations are being done each year. 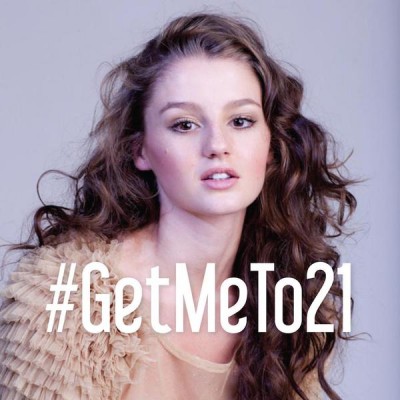 The drive for more donors to sign up was given a ‘personality’ in the form of 19-year-old Capetonian Jenna Lowe, who needs lung-replacement surgery.

She suffers from a rare condition known as Pulmonary Arterial Hypertension. Basically, it means that the veins in her lungs become progressively more constricted and don’t allow proper blood-flow. The result is decreased oxygen in the blood, and enlargement of the heart due to the increased strain of pumping blood through the lungs.

While severity of cases vary, in Lowe’s case the choices are limited. Medical treatments are palliative but, in the long run, she will need a lung transplant.

The campaign, that has come to be known by its hashtag #getmeto21, has taken Twitter and Facebook by storm. But creating a ‘buzz’ is not what it’s all about. Getting ‘likes’ and click-throughs don’t mean a thing unless there is a practical outcome.

Easy and powerful way to engage

The benefit of social media is that it provides an easy and powerful way to engage with interested parties, and converting to a sign-up is far more assured than a campaign that uses conventional means.

The smart thing about this campaign is the way in which Lowe has become a voice and face that most people can relate to. She is young, optimistic and personable.

On her microsite, www.getmeto21.com, one is greeted by a video of her, talking directly to camera. She has an oxygen line under her nose, and she seems to have a little trouble breathing. But she is upbeat and engaging. She tells us she is 19, and she’s planning her 21st birthday party.

The basic message is that she’s inviting you to the party (whoever you are), if you sign up for organ donation — she finishes off by saying, quite simply and without pathos, “Because, in order to make it to 21, I’m going to need new lungs.”

It’s a message that cleverly hooks onto something that teenagers and adults can relate to: turning 21 symbolises adulthood, independence and the potential of making one’s own way in the world.

For Lowe, this is not currently possible. She earned seven distinctions in matric, but was forced to quit university because of the physical toll it was taking on her body: the more she exerts herself, the more strain it puts on her heart. She needs a full-time nurse to help with her care, she takes various ‘cocktails’ of medication throughout the day, and she is always on oxygen.

There is a ticker on the site, and since writing about this campaign at the end of October, when the number was at 3000, over 1000 more people have signed up. There is still a long way to go, however, as the ODF set the target of signing up 50 000 people this year to meet the need; to date, some 31 000 have signed up.

It’s notable that in the months that the #getmeto21 campaign has been running, there has been a growth — from an average 1 500 per month in the first half of the year to an average 4 100 new sign-ups per month from July to November. I imagine this is at least in part due to the campaign, although the ODF also runs recruitment drives, campaigns and Public Service Announcements of its own. 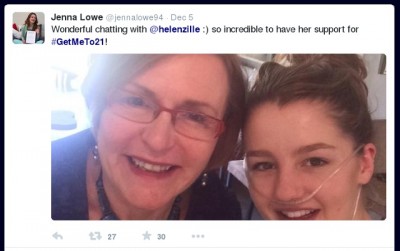 Even the Western Cape Premier is lending her support. Helen Zille visited Jenna last week, 5 December 2014, to lend her support to the campaign.

#getmeto21 has so far been featured on eight radio stations, four TV programmes (including the news) and 18 print publications. Numerous bloggers and online publications have also highlighted the campaign, and according to Liza-Jane Webb of Match Creative, who is handling the PR and publicity for the campaign, the total value of this exposure has been in excess of R10 million.

“Many non-profit organisations approach social media without a plan, and simply hope for the best,” says Webb, adding: “But the truth is that in order to create impact and awareness or mobilise people, you need to have a plan, and a smart one, too, in order to capture their attention and break through the overload of information out there. This campaign has been incredibly powerful in digital persuasion.”

Lowe + Partners Cape Town’s talented team, led by Kirk Gainsford, originally came up with the idea for the campaign, and Sascha Ruppert and his team at GSDH conceptualised the microsite and built it. Egg Films assisted with the video production. Lowe + Partners CT is also the agency for the Organ Donor Foundation.

Well done to all, to Lowe, her family and to all those behind the scenes who contributed, and continue to give their time to this worthy cause: may you continue in strength.