Design Indaba 2013: John Maeda on the dissipating disconnect between art and technology

by Herman Manson (@marklives) John Maeda (@johnmaeda) describes himself as a “humanist technologist.” Through his love for art and technology, and his belief that together they can advance technology that acknowledges our humanity, Maeda has emerged as an important thinker in our approach to both.

Currently president of Rhode Island School of Design, Maeda is a leading proponent for expanding our focus from STEM (Science, Technology, 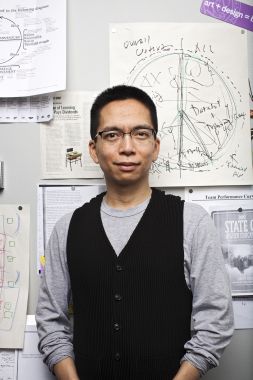 Engineering and Math) to STEAM (by adding Art).

Formerly a professor at the Massachusetts Institute of Technology he has published five books including The Laws of Simplicity (2006) and is an acknowledged artist and graphic designer. Maeda also sits on the board of ad agency Wieden+Kennedy amongst others.

Maeda is visiting South Africa as a speaker at the annual Design Indaba conference taking place Feb 27 – March 1. MarkLives spoke to him prior to his arrival in South Africa.

Tell me more about the importance of being a “humanist technologist.”

I consider myself a humanist technologist – which is how I describe caring about the nature of being human, and the nature of technology, and reconciling those. It’s important because today it’s technology that connects people, but it’s people that matter. Design is key in that reconciliation.

How can we carry over our need for simpler, more tactile experiences, to a digitised environment?

The Web is a technology that would have no meaning without the context of human expression. Computers should be a more emotional experience. When people say imperfect, they may be thinking “flawed.” When I consider the term imperfect, to me it means that something has more taste – like an older building. When something is brand new there is little feeling, no taste. It’s perfect—but it does not feel real.

This tactile experience, this feeling, must carry over to the digitized environment for that environment to connect with humans. Technology is wonderful, but we’ve been stuck in an infinite loop. We can look to design to understand the power of this technology – which lies within the relationship between form and content. It takes the possibilities to the next level – ironically, back to humanity. Artistic and design thinking and practice – grounded in humanity and dirty hands – gives technology the nuance, depth, and texture it lacks.

What opportunities exist for greater collaboration between art (and artists) and technology (and technologists) and how can it impact on the work they create?

Collaboration potential abounds. All it takes is creativity and imagination to see where and how they intersect, where the sum effect can become even greater than the parts. For the past several years, I have been arguing that we need to add the “A” for Art to turn STEM to STEAM. Art and design are needed to maintain economic competitiveness in this new century, and to generate new innovations.

STEAM is gaining traction as a movement in U.S. government and research circles as well. A U.S. House Resolution, introduced by Representative Jim Langevin “Expresses the sense of the House of Representatives that adding art and design into federal programs that target Science, Technology, Engineering and Math (STEM) fields, encourages innovation and economic growth in the US.”

Culturally speaking, there’s been a disconnect between art and technology that is dissipating. Twenty years ago when I was talking about software as art to museum folks, they ran me out of their houses (literally). Now, institutions like the Guggenheim may hold a symposium on software as art, and we think nothing of it. Gradually, change is happening.

Our Digital + Media program at RISD takes a conceptual approach to using technology as a creative medium. The students’ work is deeply varied. As an example, student Sang Un Jeon (DM 2013) is both an artist and designer, who performs social network and media reflection in unexpected material forms. He recently created a visualization of the Internet itself as a city, in the form of a keyboard. Also, Clement Valla, a RISD alum who now teaches in the department, did something last year that was a new and different intersection between art and technology: Postcards from Google Earth.

Last year in Wired you wrote “Design is no longer the killer differentiator”. What is then?

Art. It goes beyond the technology, beyond the design, and speaks to us as humans. Design can be used to communicate complex information, visualize huge data sets – and then the artistic approach takes it one step further to make us care enough to do something about it. Scientific data shows global warming. But how do we get people to care? Art. The critical thinking of artists and designers when added to STEM leads to new discovery, innovation and action.

How would you describe your leadership style and what do you think are the keys to effective leadership.

I would describe it as “Creative leadership.” The traditional organizational hierarchy has been disrupted, and has been replaced with what I call a “heterarchy,” where power resides everywhere. It can sometimes be awkward. Traditional leaders wants to be right, to avoid mistakes. Creative leaders hope to be right, to learn from mistakes. It’s an ambiguous space, and artists and designers have a lot to teach us here. Leadership and connecting people in this new world, where anyone can “friend” the CEO, is really a design challenge of sorts. It’s the challenge of the leader to find connections, and design can help.

How can the arts be made relevant in such a socially unequal society as you find in South Africa?

Art gives us hope, it allows us to imagine beyond our constraints. Creativity and economic prosperity are bound, and if you are bold enough to have a vision and take risks, you can make a difference anywhere in the world.

We have examples on www.stemtosteam.org – case studies from RISD and beyond – of art and design combining with other disciplines to create social change and address global issues.