The Gate Keeper (Chapter 4: In which strategies are developed)

The CEO eyes the intern and contemplates whether he is in fact God. The first Mangaung strategy session takes place.

Chapter 4
In which strategies are developed

He wondered as He pulled into the spacious parking slot with his name etched into a shiny silver  plaque on the wall about the God complex. Whether He could be victim to such a thing, or whether He actually was as powerful as He thought. As it felt. He had heard the phrase many times in many different ways over the years since he left university. He realised such a thing must, obviously, exist. But He knew too that some 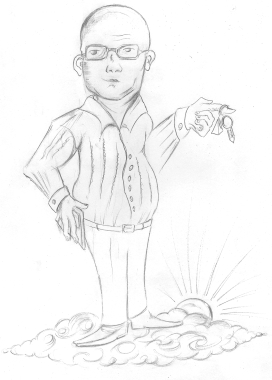 people were actually extremely powerful and influential. He, to his own surprise, had actually turned into one of those people. He had come a long way since those days as the runt of Hilton College.

The key, He decided as the fat and very old lady whose name He had yet to fully process ushered him into the  executive boardroom with His first cup of the morning, was budget. When you controlled budget, you controlled life. You became, within your own domain, if not God himself, then certainly God like. Yes it sounded arrogant. But unless you had your fingers on this type of money on a daily basis you could never appreciate the immensity of it. The God complex, He decided as He noted the presence of an exceptionally attractive and fresh looking young girl at the table, right in the middle of the usual wizened old advertising hags, was probably created by people with access to budget.

“Sir…” the fat old lady breathed heavily into His ear.

“The agenda for the meeting is in your folder,” she heaved conspiratorially, as if she knew that this particular God was completely unprepared for the session, “along with a full list of the participants, including brief biographies of those you haven’t yet dealt with.” The fat old lady withdrew and squeezed the boardroom door shut behind her. Melinda. He made a note of her name. Not a mental note. He actually wrote it underneath the front page of the agenda print out. Then He underlined it. Melinda. It could be worth remembering.

“Thanks everyone for getting here so early!” He tried to be as cheery as possible as He looked for the first time at who – pretty young thing aside – was actually at the table. “I think let’s just take a few sips to settle ourselves before we get going.” Sipping sounds ensued and several people got up to serve themselves from the breakfast table.

He pulled the agenda out of his leather folder.

EFT Bank is taking a prime position at the corporate tent at the 2012 Mangaung Conference. At Polokwane the bank benefited from taking up a similar position, but struggled to communicate effectively with stakeholders and the media exactly what ground had been covered in the late night sessions. The initiative developed a worrying tendency to dissolve into crisis communication.

This year the bank has requested TBWSJWBN to develop a viable concept, focusing ideally on youth development with a sustainable, entrepreneurial women empowerment angle, to be executed in a manner able to leverage available government tender opportunities and provide “a solid communication base for the PR people.”

Vatiswa is an intern with us. She has an honours degree in political science from WITS and came top of her Critical Context and Writing classes at Vega. She was born and raised in the rural Free State. She might be able to provide the kind of strategic youth context that is required.

He eyed the pretty young one again. She was truly good looking. Fresh. That was the word. Fresh. It was rare these days. She must be Vatiswa. He wondered who had invited her to this thing. She seemed out of place. Refreshingly so.

“Vatiswa,” He said confidently, eyeing her directly. “Maybe you can get us going. Give some insight into what the youth are up to these days.”