The Gate Keeper (Chapter 2: In which the intern is noticed)

The intern wonders if anyone will ever ask her to do anything approximating work, and then discovers a strange old white lady at the executive offices.

Chapter 2
In which the intern is noticed

Vatiswa Magubane was, to be honest, shocked to find a very large and equally old white lady sitting behind His reception desk. And sitting 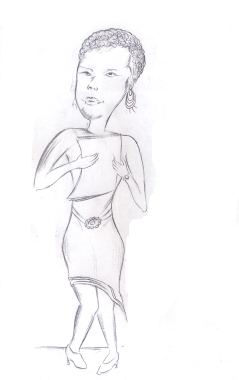 wasn’t even the right word. Commanding. That was more like it. Her massive frame, wrapped in an odd series of interlinking wraps of different and not completely complementary colours, sat authoritatively on top of what Vati guessed must have been a reinforced office chair. She was, Vati couldn’t help but think, an old white female version of Jabba the Hut.

Vati had been an intern at TBW Smith Jones Wallace Broadbent and Ndimande for three months. Thus far she had gained extensive experience in how to make coffee. And how to get suddenly and shockingly drunk on an early Friday afternoon and end up snogging a white boy graphic designer. And how to take meeting minutes and send them to creative teams who openly sneered at the idea of minutes, and meetings. And how to feel generally useless and stupid.

As far as the copy writing she had actually studied went, there had been no sign of it. It was as if no one had perceived that she was around to work. That she was a post graduate with an honours degree and a first in advertising from Vega. That she had ideas and notions and talents and skills and all those things.

Now she stood in front of Mama E, all of 24 years old, overcome yet again by a toxic mixture of personal paranoia and professional resentment. She also smelled, she thought as she approached Mama E, over and above the general hum of the stale office carpets, what she could only identify as Talcum powder.

The old lady eyed her out. And then spoke.

“My dear, I presume you need to make something happen, and that those papers in your hands are essential to the task at hand. Am I right?”

Vati nodded, and opened her mouth to speak. No words came out.

“Well don’t just stand there gawking angel. I know you’ve seen ancient female mlungus before. Now you just need to adjust to the fact that there’s one sitting in this particular chair. Bring…” the old lady beckoned with a crooked finger, purposefully mimicking a witch. Vati stepped forward, trying at the same time to pull her mini skirt closer towards her knees. She handed the sheaf of reports over.

“They call me Mama E my dear,” the old lady all but ripped the papers from her hand. “What do they call you? And what brings you to my end of the world?”

“Ag shame,” Mama E flipped quickly through the papers while she spoke. “That means they’re going to ignore you and insult you for years before you actually get to write an ad. And, mark my words, a pretty young thing like you will certainly get her first chance on sanitary napkins.”

“Ok then angel, I will see you later,” Mama E gave her a long, beady eye, “of that I have no doubt. These reports look like complete kak. I’m sure He’ll toss them back at your superiors before lunch.”

Vati strolled painfully back in the general direction of her desk. There was boredom. There was annoyance. There was frustration. What she was currently feeling went beyond all three. It was as if she had entered an entirely new state of being, as if she had transcended mere negative emotions to emerge in some new state of metaphysical creative angst.

They didn’t cover any of this at Vega. At Vega it was all critical context and understanding processes and breaking down target audiences and generating conversions from coverage addressing the different aspects of narrative voice in a multi lingual society.

She decided, on a whim (well, mainly to see if anyone would notice) to take a quick walk the Hyde Park shopping centre to look at magazines at Exclusive Books. Maybe there would be something interesting there to latch onto. Maybe someone in this miserable pit of an office would notice she was gone.

4 Responses to “The Gate Keeper (Chapter 2: In which the intern is noticed)”