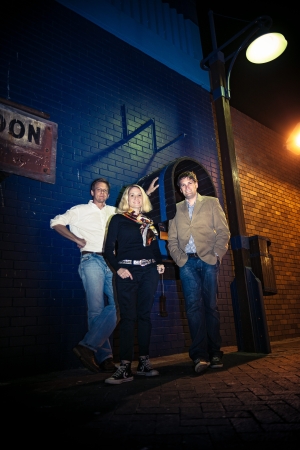 also become a partner in the business. Van Rensburg is best known for  her work at Joe Public, where she served as Creative Director (CD) at Joe Public Cape Town between 2004-2006 and then as CD and a member of its board after the merger of the Cape Town and Joburg offices between 2006 and 2008.

Since 2009 and up to the end of 2011 van Rensburg had been CD and co-manager at TBWA\ Hunt Lascaris CT, where she assisted in restructuring the internal day-to-day operations of the agency, and where she worked on the successful Unite Mzansi Unite campaign for adidas during the 2010 World Cup.

She joins the agency co-founded by Ben Wren and Michael van den Heerik in 2010. 60 layers of cake has grown to just under 20 people and recently launched a Social Media team which has already won the worldwide social media community management for Heineken International Ideas Brewery as well as the European rollout for sportswear brand Under Armour.

Wren and van Heerik had been looking for a creative partner to compliment their strengths in operations and production. The search had been ongoing as the agency sought out a proper partner and stakeholder whose thinking extended beyond ATL.

Van Rensburg has been tasked with building up the creative team at 60 layers and to produce work that responds to client needs but also raise the agencies creative credentials in the industry.

“I understand 60 have a different approach to the media landscape that focuses on sustainable, innovative thinking,” says van Rensburg. “I wanted to move from a traditional agency setup to working with a broader range of people, to collaborate more and better, because I believe ideas are the currency of the future.”

Van Rensburg promises a more realistic approach to marketing that adds meaning and not just push false needs onto clients.

Van Rensburg, who together with her team at Joe Public was responsible for the strategic repositioning of amongst others Clover (110% love), Clover Cream (Add love to the moment), eBucks (The Reward of Choice) and Tracker (Taking Back Tomorrow), argues that great ideas can no longer be developed in isolation. Clients need to be involved in the campaign process from campaign conception through to execution.

The entrepreneurial nature of 60 layers also appealed to her and she looks forward to the flexibility and hands on approach such a culture entails. A passion for creative work that also makes a difference on the part of van Rensburg has resulted in the launch of a CSI offering at 60 layers.

Collaboration is a word 60 layers brought to the local market in terms of agency positioning and it has quickly been taken up by many of its rivals. Wren agrees it’s become overused but argues few agencies really understand or are willing to implement collaborative strategies.

So his agency recently refused to participate in a pitch after only being granted a 30 minute interview and one page on the business. “We need to properly understand a business and evolve in partnership with clients,” says Wren. The agency is now on the two agency shortlist in spite of not participating in the pitch process as originally structured. The point, says Wren, is that there is a lot of talk about a collaborative approach to work but little implementation.

Similarly the agency had been approached to pitch for the redevelopment of the CI of Herold Gie Attorneys. Wren again declined to pitch on the brief provided, instead using the interview to argue for a redesign of the board room and reception area of the company offices, which had a dated feel, only to be told that the firm had indeed identified this as a problem area, and that he had been the only person to put this on the table as an issue to be addressed if it wanted to change its business image.

60 layers is working on the CI, is redesigning the reception area, as well as introducing the firm to social media and the Internet. From a firm perceived as extremely traditional the agency is helping it modernise its image and fundamentally transforming its business.

The agency recently bought back the shares held by its network partner in Amsterdam. While it remains part of the network all shares now reside in South Africa. The move allows it to collaborate with other international agencies in future.

News from adland you will make time for. Stay up to date with our weekly mailer. Subscribe here. It’s free!