Following reports in the Sunday press that a provisional report from the Public Protector has found the R70 million Western Cape government communications tender currently held by TBWA Hunt Lascaris “invalid” the provincial premier and DA leader Helen Zille has issued a response through her newsletter SA Today.

Also see our story (August 17, 2011) on the original ‘tender scandal’ report by the Sunday Times. The Sunday Times had published allegations that the office of Western Cape premier Helen Zille has awarded the province’s communication budget to agency TBWA\Hunt\Lascaris without following proper tender procedures. It valued the contract at R1 billion over two years.

We reprint Zille’s statement from SA Today in full:

The purpose of this edition of SA Today is to set out the facts and the context of prominent reports that appeared in various Sunday newspapers suggesting that a communications tender issued by the Western Cape Government was “unlawful” and should be terminated. These reports have understandably caused widespread concern. They are based on a draft report written on behalf of the Public Protector, that was leaked a week before the agreed deadline for us to submit comments to rectify mistakes in the draft.

Our response to the reports on the leaked draft is as follows:

A provisional report, drafted for the Public Protector, into the Western Cape Government’s “alleged improper procurement of communications 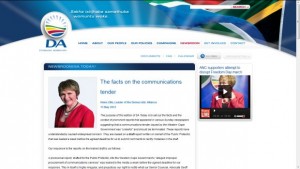 services” was leaked to the media a week before the agreed deadline for our response. This in itself is highly irregular, and prejudices our right to rectify what our Senior Counsel, Advocate Geoff Budlender, believes to be material legal errors in the draft report, before the report is finalised. Without casting aspersions on the Public Protector herself, we believe this premature leak prejudices the administration of justice and compromises our rights.

Under normal circumstances it would not be appropriate to respond to the draft report in public before we have interacted with the Public Protector and given her the opportunity to consider the legal opinions we have obtained, and correct the draft before the publication of the final report.

We have tried repeatedly to make contact with her since we became aware that the report, written on her behalf, had been leaked late last week. Our attempts have failed. We therefore have no alternative but to state our case publicly. We also place on record that, should the draft report’s material errors in law not be rectified in the final report, we will take the findings on review to the High Court.

It is important to point out that there are a number of central points that are beyond contestation and are accepted as “common cause” by all parties in the matter.

Most importantly it is accepted that there was no corruption whatsoever, nor any evidence of political involvement, interference or manipulation in the procurement process.

The draft report finds that two (out of the six) people who served on a tender bid evaluation committee should not have done so. The two were special advisers to the Premier, Ryan Coetzee and Gavin Davis. However, the Public Protector’s draft report acknowledges that there was no attempt to improperly influence or manipulate the process, that the presence of the special advisers made no difference to the outcome of the evaluation, and that indeed one of the special advisers, Ryan Coetzee, had supported another company during the short-listing.

The key paragraphs in the Public Protector’s draft report are as follows:

7.1.1 “No evidence was presented or found during the investigation that indicates any involvement of the Premier personally in the procurement process”.
7.1.2. “There was also no indication found suggesting that the Premier instructed that her special advisers should be (or that she was aware that they were) involved in the drawing up of the specifications of the tender and appointed as members of the Bid Evaluation Committee.”

Turning to the role of the Special advisers, the Public Protector’s draft report concludes:

7.6.2: “There was no suggestion that the Special Advisers of the Premier that were involved in the procurement acted improperly or tried to manipulate or influence the process in any manner.”
7.11.2: “During short-listing the majority of BEC members rated TBWA as the highest, with the exception of Mr Coetzee.”

Despite this, the Public Protector’s draft report concludes that the involvement of the special advisers was “unlawful” and therefore rendered the contract “invalid”, requiring its termination.

According to our senior counsel, Advocate Geoff Budlender, this conclusion is legally flawed and cannot be sustained because there is nothing in the Constitution, the Public Finance Management Act, the Treasury Regulations, or the Accounting Officer’s System that, explicitly or implicitly, prohibits the involvement of special advisers in the bid evaluation process.

According to Budlender’s opinion, on the subject of EXPLICIT prohibition, he says:

23. “I have been unable to find anything in the Constitution, the PFMA, the Treasury Regulations or the AOS [Accounting Officer System] which explicitly makes it unlawful for a special adviser to be a member of a BEC.”
35. “It follows from what I have said that there is no provision in the law which explicitly prohibits the participation of special advisers as members of a Bid Evaluation Committee.”

55. “Under the circumstances I do not think one can draw the inference that the law implicitly prohibits the participation of a special adviser in a BEC [bid evaluation committee]…”.

Budlender concludes that the argument for terminating the contract cannot be legally sustained. In fact he explicitly says that the Western Cape Government does not have the legal power to terminate the contract. In order to do so, we would have to make an application to the Cape High Court, but this would be unlikely to succeed because “the court would inevitably find that considerations of public interest, pragmatism and practicality lead to the conclusion that the award of the tender should not be set aside.” (para 76).

In fact, if we were to make an application to Court to terminate the communications contract it would result in fruitless and wasteful expenditure.

The draft Public Protector’s report also contains a number of additional comments and conclusions which we contest.

However, we agree that the R8,696 spent to re-advertise the tender could have been avoided, but this money was spent precisely to prevent future and potentially significant fruitless and wasteful expenditure that would have been incurred if the error in the original advertisement had not been corrected early on.

The administrative flaws that emerged in managing the original tender process (which required special procedures in order to apply to all departments) were identified early on through our internal systems, and rectified long before the issue became a public matter. We immediately acknowledged the administrative shortcomings at the start of the process and we are constantly working to improve them.

None of these administrative glitches involved anything unlawful. Nor did they amount to material failings that could not be rectified. They were, in fact, rectified and the awarding of the tender was not compromised.

As for the value of the communications tender: When reports first appeared, absurd sums of up to R1-billion were given. It is worthwhile noting that since the contract was brought into effect less than R6-million has been spent on communications with the agency, of which TBWA, the company involved, has received less than R1-million.

There are, of course, the inevitable calls for me to resign as a result of the Public Protector’s draft report. I had undertaken to resign if the tender was found to be corrupt. It is common cause that there was no corruption whatsoever, and I regard these resignation calls as the normal political posturing that should be treated as such.

I will be making all of these, and other points, to the Public Protector myself when I meet her later this week in order to give her the opportunity to rectify the report before she finalises it under her name.