Team Quirk was asked to create a digital campaign for the Comic Choice Awards Sponsorship. The objective of the campaign was to drive brand awareness 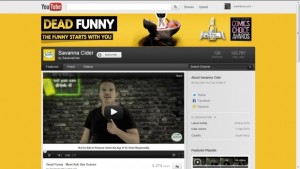 for Savanna as ‘the official drink of funny’.

Creative solution: Team Quirk thought it would be cool if we gave viewers the opportunity to ‘kill the comedian’ if they thought their joke sucked. This became ‘Dead Funny’. Featured comedians include Rob Van Vuuren, Martin Evans, Rustum August and “Mum-z” Mokoena.

Production process: Quirk filmed a series of well-known stand up comedians and, depending on whether their performance is “Liked” or “Lame”, created alternative, surprising and humorous responses – literally killing them off. These interactive YouTube video’s form part of a wider integrated digital campaign including social channels, rich media display advertising and email.