Live from SA – the youth have their say

by Herman Manson: @marklives Live SA is a new youth publication published out of Cape Town. There’s the usual stuff on love, YouTube, being brave and following your heart, should you get that body piercing, music, freedom and fashion – and then maybe the less usual stuff, about falling out of the closet aged 16, what to do when your countrymen’s infamous xenophobia breaks down the lives of friends, of falling in love with gangster boys and having Miss Khayelitsha pose in front of the backend of a construction truck… 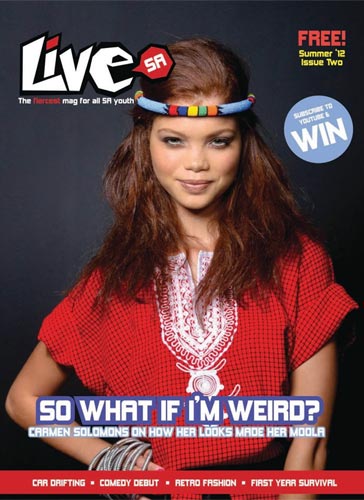 Youth publishing as a social enterprise – a concept even more unique than the content and contributor base (which consists of mostly untrained youths aged between 18-25) – has landed in South Africa, courtesy of Brit Gavin Weale and the Shuttleworth Foundation.

Weale, who has a background in journalism and marketing, had joined a marketing firm in London in 2001 called Livity, which pitches itself as a socially responsible marketing agency that aims to deliver on both brand and CSI targets. Live UK was one of its first projects, and launched as a magazine that allowed the local government to talk with disaffected teens in South London.

Using teens (initially from a local youth club) to direct and create the content of the magazine under guidance of professionals in the industry, the quarterly publication soon took off. The UK edition shares offices with Livity, which is great for the magazine because it creates a professional office environment for its contributors, and a large part of Live’s function consists of preparing kids for the work environment. It’s great for the agency, too, as its core constituency actively interacts with it every single work day.

A magazine and CSI project turned into a youth-training project “by mistake”, and Weale and his partners soon placed the magazine in a non-profit company which sees as many as 1000 kids pass through its offices every year.

Employability (well, the lack there-of) is a significant problem amongst the youth in the UK, and even more so in SA, and it’s a core issue being addressed by the magazine, which hopes to see its co-creators inspired to go back to school, take a job, or just integrate a little easier into social and professionals situations. The project aims to draw kids from a wide audience – and part of it is set aside to assist bringing young offenders or kids recommended by social services into a positive interaction with society.

In the UK, the magazine has since been weaned off government money and runs as an advertising-supported, not-for-profit business.

Weale headed to Cape Town in 2010 after being shortlisted for the British Council’s UK Young Publishing Entrepreneur of the Year award that required him to develop a business plan for a publishing enterprise in a developing economy.

Having won the prize for his vision of bringing Live magazine to our shores, Weale started meeting with industry players, ranging from ad agency guys such as Mike Schalit, whose Cape Town offices Live magazine now shares, to the Shuttleworth Foundation, which ultimately offered him a fellowship to help finance the new venture.

Twenty teens from different parts of the city – ranging from Athlone to Khayelitsha to the city’s northern sub-burbs – have taken on internships. 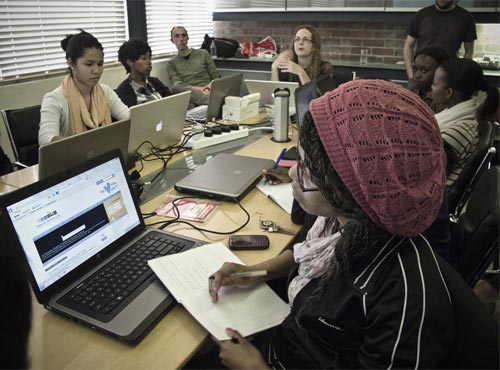 The internships have been created for unemployed young people who wanted to participate in creating the magazine, which is distributed free of charge and has a print run of 50 000. Ranging in ages from 18-25 years old, they come in for work a minimum of three days a week.

Weale says he looks for potential and attitude, rather than education, when selecting candidates. Mentors from the industry volunteer their time to train the team in producing each issue.

Issue one hit the streets mid-November 2011 and the second issue came out late February 2012. Staff turnover at the magazine is high, Weale admits – the second issue also saw its second editor – and Weale is still trying to figure out how to stabilise this, although, since youngsters are encouraged to engage with a work environment, some of them do go out and find jobs, so in a sense it also helps the title achieve at least one of its objectives.

One former staffer moved into a radio job three months after joining Live, while another received an internship at 140BBDO. Weale is also forging links with organisations recruiting young talent.

Of course, some kids, for better or for worse, simply fall out and back into old neighbourhoods and habits.

The title is distributed at schools, universities and colleges, malls and through neighbourhood networks organised by contributors themselves and which accounts for around 40% of the total distribution.

Brands such as e.tv, Google and Chicken Licken, as well as the Department of Higher Education and Training, have signed up as sponsors and advertisers. In May, the magazine will launch a mobisite to facilitate reader interaction and it’s also active on Twitter, Facebook and YouTube.

Weale says parallels between the youth in London and Cape Town includes their ambition and cultural activities (music, movies etc) and the extent to which the education system in both countries impact (sometimes disastrously) on the futures of young people.

Surprising to him was the SA youths’ reluctance to just get into the job market and make a go for it, especially those with a tertiary education; they choose to not work at all and stay at home, rather than accept what they consider positions below their stature. Navigating through this culture of expectation, says Weale, is a major challenge for an organisation that wants to prepare youngsters for the real world of employment.

Kids need to take responsibility back for their own futures, says Weale, if they hope to succeed and build a better future for themselves.

Weale also found local contributors aren’t as outspoken as they are in the UK, don’t question the status quo as often, and are socially more conservative than he expected. Of course, a lot of his young contributors still stay with their folks, and it has to be taken into account that their parents will engage with the magazine they help produce. Our educational system isn’t exactly geared to nurturing questioning the status quo, either, as Weale is finding out the hard way.

The magazine will, however, find its own strong voice in its own good time as contributors grow accustomed to their roles and responsibilities (also to readers), and the employment churn rate at the magazine stabilises.

The title has funding to finance it through to March next year; it’s finally recruiting a professional sales person (having had to rely on Weale’s efforts in the interim); and Weale hopes for more corporate support as the year progresses. Media planners haven’t engaged, to nobody’s surprise, so Weale is forced to pursue more direct routes to marketing decision-makers.

Weale is calling on brands to engage with a demographic that is important to their future sustainability, to take a long-term view and invest early on in an audience that is going to be hugely important 5-10 years down the line, and to actually make a difference.

In short, Live is about giving back as an investment in young people – it’s a hand-up, not a hand-out – while also achieving marketing and CSI goals.

Paging through the second issue, it’s easy to spot the budding talent and it’s encouraging to see how a print magazine engages with a digitally adept audience through Twitter handles for staffers and YouTube content. It’s also surprising how mzansi the magazine really is – it might have a sister in London but it’s South African down to its last blot of ink.

Marketers need to engage with SA youth outside the carefully targeted LSMs, that tunes out everything you don’t want to hear, through platforms such as Live if they truly want to keep their fingers on the pulse of local youth culture and attitude – they are live and streaming to a magazine near you.

One Response to “Live from SA – the youth have their say”