by Herman Manson Find courage. To leave the Wookie pant-less. To think

wrong, and be right about it, to capture a sense of place in otherwise mundane spaces, to give when its not something your trade is known for, to order cities from the informal rather than the formal city. And to enjoy doing it.

Design Indaba 2012, the annual design conference held in Cape Town, 29 February – 2 March, got underway on Wednesday with a call from speakers to approach design from unconventional viewpoints as a route to true creative solutions.

Designers become victims of their own heuristic neural pathways (learned, 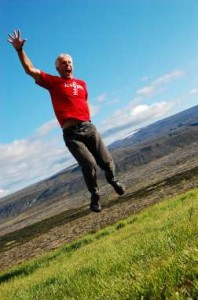 pre-determined behaviour) said graphic designer and social entrepreneur John Bielenberg. To break such behaviour they need to avoid the conventional – i.e. ‘think wrong.’ Get out of the office and speak to people, take risks and make stuff that reveal your talents, and have fun doing it. As Bielenberg notes – if changing the world isn’t fun then nobody is going to do it. Some might call that flippant but who says seeking, designing and implementing change is only for the morose and the humourless?

Bielenberg, through his Project M initiative, has inspired his students to come up with real innovative solutions that changed lives, whether it was the Mbulance supplying graphic designers affected by Hurricane Katrina with supplies or handing out free pie to foster a sense of community – something that developed into a sustainable eatery that supports families and created an inviting communal space in an otherwise segmented community.

A point many speakers would make is that change cannot be planned on a global scale – you start where you can and it will replicate itself around you.

This was very much the core message from Alfredo Brillembourg, founder of architecture firm Urban Think Tank. As predicted – it’s the architects and their contributions to creating livable urban environments that often carry Design Indaba. Brillembourg did so again with his (sucker punch to conventional thinking) take on informal city-scapes.

Brillembourg points out that informal settlements is a fast growing part of all urban landscapes. In South Africa this has been a reality for a long time but few have been brave enough to offer solutions to integrating formal and informal (Brillembourg describes them as ‘another city’ within the formal city) urban environments. We either entrench the segregation or ignore these settlements – paying attention would mean political accountability after all.

Brillembourg calls on architects to expand their horizons – informal settlements is in crisis and desperately requires well designed solutions. By ignoring these parts of our cities architecture as a profession has depleted its legitimacy, argues Brillembourg. Designing for the 1% and ignoring the rest is no longer sustainable (and have arguably never been).

Informal settlements are not simply problems – they offer solutions in themselves. In San Agustin, a poor barrio in Caracas, Venezuela, Brillembourg and his team took a collaborative approach to urban planning by involving local community leaders in finding solutions to the areas infrastructure problems.

Local government had proposed a system of roads that would have flattened 30% of the houses in the district. Instead Urban Think Tank proposed a cable car system (San Agustin is built against a steep mountain ridge) running over 2.1 km and allowing movement of 1200 people per hour.

The cable car system was fully integrated with the metro system in Caracas. The five stations have cultural, social and system administrative functions, and serves as public spaces, and houses in the area are being upgraded by their owners. Make a start at change and the surrounding area will follow on its own volition.

Charl Thom and Justin Gomes, the South African duo from local agency FoxP2, called on delegates “not put pants on the Wookie”, a reference to the pant-less character in the movie Star Wars, which studio execs had tried to force George Lucas to dress, completely changing its character (at least from nude to semi-nude, but you get the point). Lucas resisted, and did some other very smart things like cutting his directors fee for the faithless studio suits in favour of the merchandising rights to characters in the film, which of course made him enough money to go out on his own.

The FoxP2 guys warned against ‘best practice’ – like putting pants on Wookies, or in another anecdote from the making of Star Wars, the disco soundtrack that thankfully never was, but which studio execs felt would work with its target audience.

Rene Redzepi, owner of Noma, which tops the S.Pellegrino World’s Best Restaurant list, also looks at design (in this case food design) differently. He dismisses all the attention placed on chefs in the ‘restaurant food chain’ and gives credit to farmers for returning to polyculture food production. They are often dealt with by buyers who talk price but never praises.

Redzepi not only deals with and encourages farmers directly, he also transformed his guests’ notion of a fine dining experience by stripping his restaurant to quality, hand made but otherwise bare furnishings. His chefs serve the food they created, taking them out of the kitchen to interact with their customers, and he looks after his people, through the kitchen studio (described as a Google like space for foodies), something the restaurant trade is not known to do often.

The young designers participating in the Pecha Kucha also impressed with their sometimes sincere, sometimes bizarre but always questioning takes on design. Rahim Bhimani from Canada created a flat pack toilet that makes use of biodegradable waste bags (to be buried) which can be rolled out to serve in areas struck by natural disasters.

Carly Berger from the USA, alongside her college team, helped create a solar powered house that aims to be affordable, replicable and movable, in a bid to bring such buildings from expos to neighbourhoods. One such residence can save its owners an equivalent of R996 000 in bills over a 25 year period.

Andy Chen, another Pecha Kucha participant from the US pointed out that often we are “at ease with grievance but not with grief” in how we treat those in our prison system (our legal system has failed to protect those we imprison once they have been locked away) or the sexual health of the elderly.

Local designer Renée Rossouw explored her professional identity through design, while Sputniko! from Japan, designs to trigger discussion and debate, like with her “Menstruation Machine” which attempts to replicate the effects of menstruation, and which MOMA describes as exploring the “relationship between identity, biology, and choice, while also inquiring into the meaning of gender-specific rituals.”

Finally, Massoud Hassani, a Pecha Kucha participant from the Netherlands, took his childhood toys from his native Afghanistan as inspiration to create a wind-powered land mine clearance device, which costs only $40 and is wind powered to roll across the land of his childhood country and detonate unexploded mines.

None of the designers speaking on the first day of the Design Indaba claimed they can change the world. They did claim they could make a small part of it better. By looking at things differently. And then finding the courage to follow their vision.