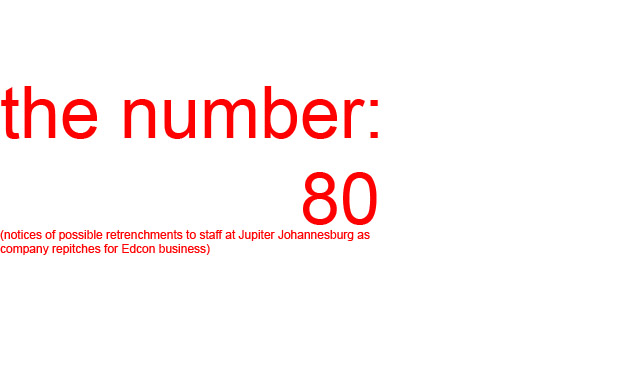 The Jupiter Drawing Room (Johannesburg) has confirmed that the agency sent out 80 notices of possible retrenchments to staff on Friday, 2 December 2011. This follows news that Edcon is pitching its business. Jupiter, which currently employs 210 people, has held parts of the Edcon business for as long as 14 years.

Jupiter Joburg CEO Alison Deeb says the agency is following the legal requirements as set out by labour legislation, which requires notice to be given if jobs cannot be guaranteed. Obviously, with the account going out to pitch and the possibility that Jupiter might lose parts or even all of the business, jobs are at risk.

That said, no actual retrenchments have yet been made.

Deeb says the agency had been informed of the move to put the account out to pitch some time ago and has had time to take in the news and to decide if it wanted to repitch for the business. Deeb says that, while it’s difficult for incumbents to retain accounts that has gone out to pitch, the agency is cautiously optimistic that it will be in the running for both streams, and that it would retain at least some of the Edcon business.

Deeb says Edcon has a new CEO in Jurgen Schreiber, who wants to ensure his group is partnered with the best throughout its supply stream. Deeb says she is confident that Edcon isn’t pitching it business because it wants to replace its agency but because “it wants to ensure it is working with the best agency”. She believes that that will remain Jupiter Johannesburg.

Edcon consolidated its advertising accounts under the direction of The Jupiter Drawing Room Johannesburg in 2005 “in a move designed to generate improved efficiencies of scale for the group”.

Deeb says the discount division shortlist has already been announced and that her agency is one of the five on it. Deeb expects an announcement on who will take the account by early to mid-February. She has no information on when the agencies in the running for department store business will be shortlisted.

The news from Johannesburg follows on that from The Jupiter Drawing Room (Cape Town) which is retrenching 20 members of staff, as well as numerous contractors, following the shock announcement last week Thursday that it has lost the Woolworths business. Woolworths has decided to move its advertising in-house as a cost-saving measure.