The silence on COP17 and its unintended lesson for South Africans

South Africans have an extraordinary social conscience, says Thomas Kolster, the Danish communications consultant and author of the soon-to-be released book The Bible of Goodvertising (from Thames & Hudson) who is visiting South Africa in the run-up to the COP17/CMP7 conference being held in Durban, 28 November – 9 December 2011. Which is why the lack of public debate on and interest in COP17 here is so surprising to him.

After all, climate and social issues are closely interlinked, the poor and middle-income groups are feeling the pain inflicted by, for instance, steadily rising food prices and lack of access to clean water (be it drought in some areas and flooding in others – also see infographics on the condition of SA rivers and SA food production). 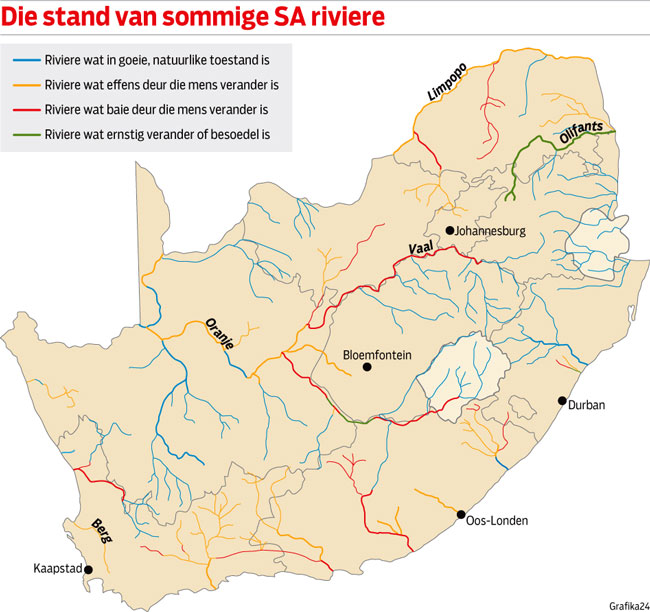 State of some South African rivers. Copyright Graphics24. Reuse without permission not allowed. 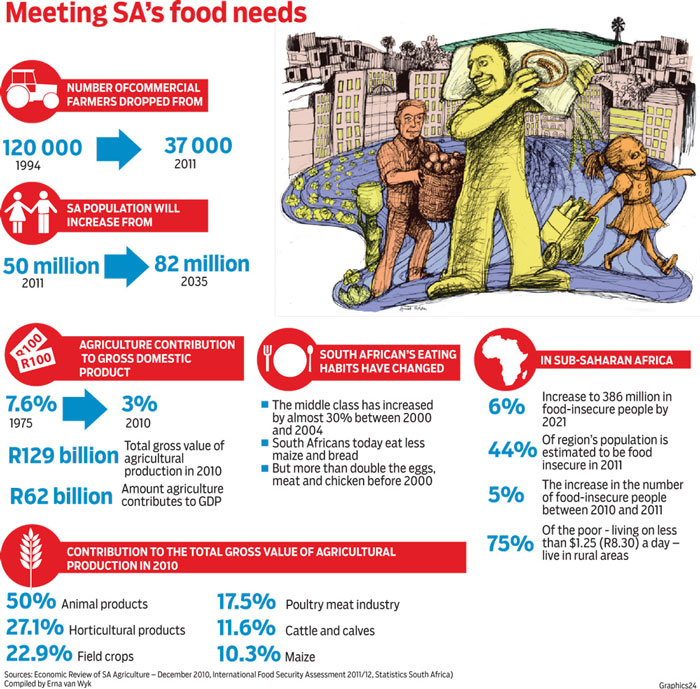 Which is why Kolster noted what many SA communication professionals and journalists have ignored to date: that South Africa’s hosting of the COP17 hasn’t been celebrated as another coup for the country often portrayed as chaotic and criminal in international media reports, or as another indicator of its rising influence in emerging market and world affairs, or an opportunity to educate South Africans in the importance and benefits of economic and environmental sustainably.

Visible marketing efforts to tie in with the goals of COP17 (assessing progress made in dealing with climate change) have not yet rolled out (if they will at all), news media have started covering the run-up to the event but still offer little in terms of educational features, and government seems too busy with adding layers of security around Durban than engaging locals in the process.

This is the Conference of the Parties (COP17’s official name), rather than a conference of the people in more than just name, and this partly explains the lack of engagement by South Africans in what (the few who have an opinion on it) already view as a failed political process. 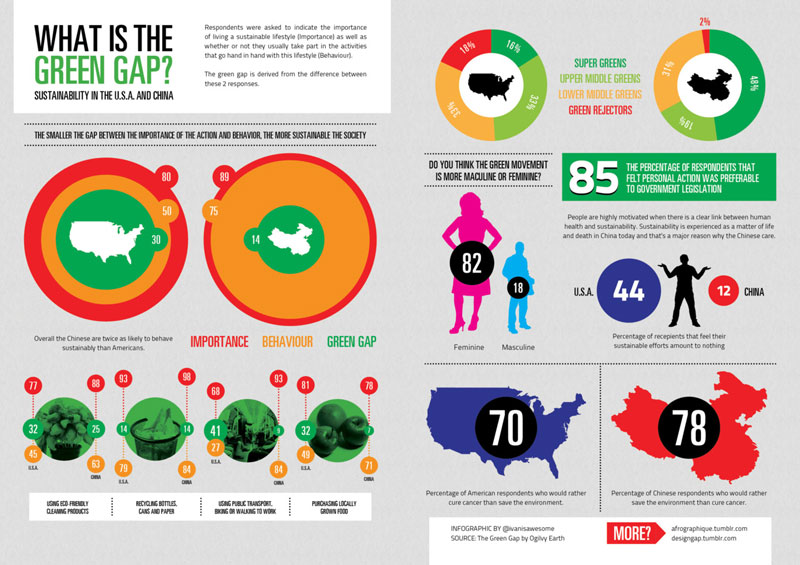 An infographic exploring the differences that Chinese and American citizens have towards sustainability. Information from “The Green Gap” report by Ogilvy Earth. Copyright Ivan Colic, Designgap.

Of course, the IP lawyers have also put a damper on any sense of COP17 whoop whoop, with a seven-page terms of use document for the COP17 logo: “The South African Government is entitled to sue anyone who copies the COP17/CMP7 logo. In addition, if anyone knowingly trades in goods featuring an unauthorised copy of the COP17/CMP7 logo, this will be a criminal offence. The COP17/CMP7 logo will enjoy legal protection.”

Kolster says in Denmark, host of COP15 in 2009, the event that sparked his interest in the climate change debate and lead him to COP17 in South Africa, business went to considerable effort to show that they bought into the need to run sustainable enterprises – and not only during the course of the event. It changed business practice at ground level in the host city.

If consumers care, business needs to care, says Kolster, who recently penned a call to action for Bizcommunity.com which stated: “The competition is no longer about being bigger, better or cheaper, but what difference you want to make for people and planet.”

Marketers should not confuse the lack of conversation around the event with South Africans not caring about sustainability. They care very much, if the communication is made relevant to them. If Pick n Pay is going to advertise food, why not discuss and advertise healthy food, asks Kolster.

Or take the cellular providers and banks that are urging consumers to switch to ‘greener’ electronic billing communication but doesn’t feed their economic benefits through to consumers. Why shouldn’t going green(er) be equated with economic benefit to consumers if you are genuinely serious about environmental sustainability?

Here, retailers still see ‘green’ and ‘organic’ foods as the basis for a higher price point, adds Kolster, while in Europe this practice is fading; the ‘wheel of good’ as Kolster phrases it, has turned, and greater adoption are eroding the higher pricing, to the benefit of consumers.

Healthy food should not be the domain of the well-off, Kolster points out, leaving me to ponder why SA marketers still communicate that it does. And how blatantly this exposes the siloed approach to marketing in this country.

For Kolster, the failing of politicians on issues such climate change – and he acknowledges that COP17 will likely result in more stalemate and 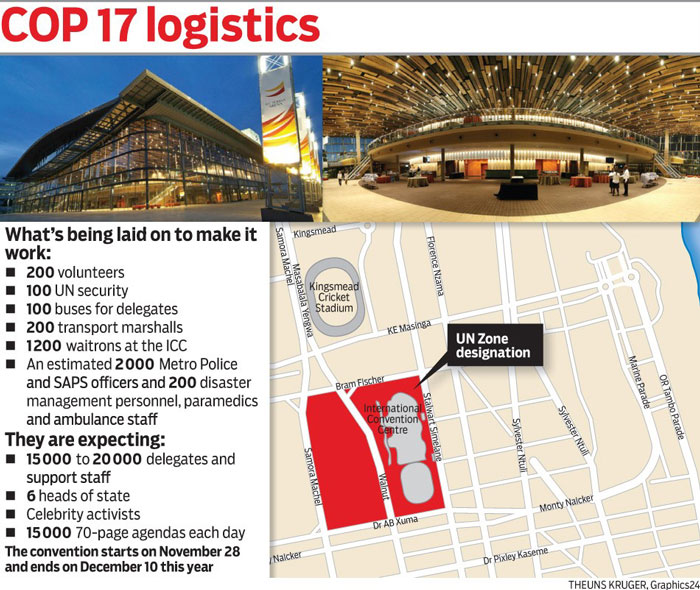 partisanship, empty promises and little implementation on whatever is agreed – simply highlights the importance for people to take matters into their own hands.

Vote for change with action; that really is the challenge Kolster is throwing at the feet of citizens, both private and corporate. People want to make a difference. Look no further than the global Occupy Wall Street movement, which is very much about standing up for the vulnerable against perceived corporate excess, and whose influence is being discussed in terms of decades rather than months.

If the people are there, and your business and communication needs to be where they are but aren’t, ask yourself why they’re not! Then take action to address the gap.

Kolster views the corporate world as an arm of society, not as something arrayed against it, and says it operates with a licence from society, a licence that demands a return not only for shareholders but for the communities where they trade.

Communication can raise awareness and spur action – drivers for change. Kolster says he doesn’t mind if that change benefits your bottom line – it’s all part of the sustainability process – but communicate for the benefit of consumers(and their environment), rather than simply consumption.

People and business are not that different, says Kolster; at the end of the day both look at their wallets when making decisions. As consumers shift spend towards products that offer tangible benefits for consumers and their environment alike, business will have to follow. Of course, there are risks inherent in following the market, rather than helping set the pace (by ignoring COP17 for instance), which marketers need to take cognisance of.

Kolster also argues that, as host nation, Government needs to take some responsibility to involve citizens in a global debate that affects their 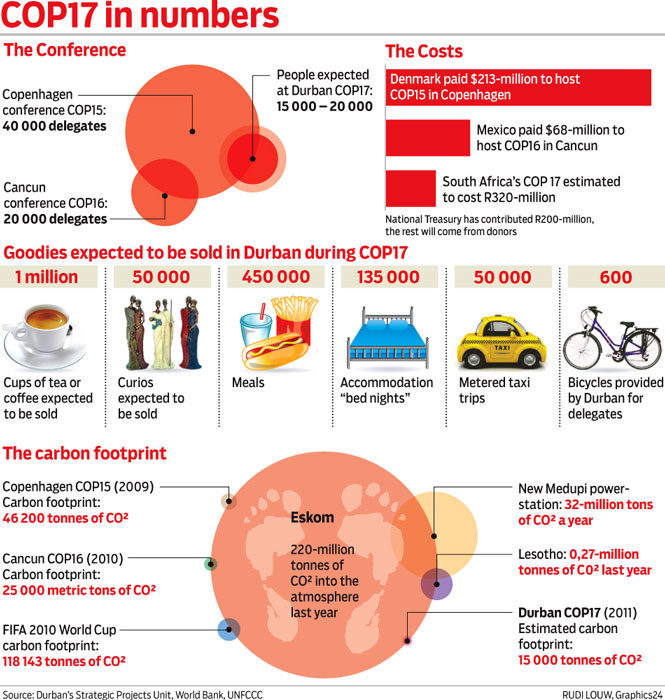 The Durban climate summit in numbers. Copyright Graphics24. Reuse without permission not allowed.

future. Rich or poor, we are all in this – it’s a challenge that goes beyond the politics of wealth or race, age or gender. It’s an opportunity for a cross-section of South Africans to speak with one another and together, yet it’s allowed to slip through our fingers.

Don’t blame the politicians, says Kolster; if nobody does anything, nothing will happen, so less complaining and more action are required from civil society. Change will never be driven by politicians. Again – the power rests in our hands.

Kolster cites Nedbank’s solar billboards as an example of advertising that makes you think twice about what communication can really contribute. Yes, it’s small in scale – but it’s a step in the right direction. Now if only somebody would take a leap!

In India, solar power is being offered by NGOs and small entrepreneurs as a way to bring electricity to 300 million Indians still off the national grid. It’s not free, but its competitive with current alternatives such as black-market kerosene, and the government there hopes the off-grid solar yield will quadruple to 200 megawatts within two years through tax credits and other incentives aimed at both consumers and solar panel manufacturers.

As brands make up an ever-larger part in the valuation of corporations, they have become an Achilles heel for executives – protecting shareholder value now very much equates with protecting the brand – and the rise of social media means companies are treading carefully through the minefield of consumer activism. It’s forcing change in itself – social media is bringing people power to the fore like never before (for Kolster, social media power represents true democracy).

People-power has arrived, enabled with technology, and companies – as an extension of the society in which they operate – need to adapt their operations and communication to this reality. Like politicians, they can be voted out by citizens (who votes with their wallets), something the politicians and other talking heads at COP17 might do well to remember themselves.