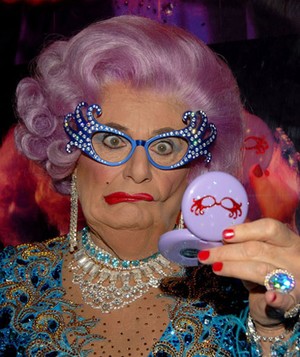 “Our growth has been phenomenal over the past year,” says Brent Doss, Commercial TV MD. “Our hard hitting news, socially focused documentaries and the pick of old US sitcoms and movies have clearly delivered what the public wants, and now we’re looking to build on this growth. Consequently, our programming will be moving heavily towards smut as the year progress.”

“Look, they’re not great movies by any stretch of the imagination, but the ‘boob count’ is really high, and they’re dirt cheap. These are important value factors when it comes to bulk purchasing.”

“Teleshopping is very viable, fiscally speaking,” says Doss. “But really the content is morally repugnant – and our brand has suffered as a result. Our research indicates that ex-consumer journalists demonstrating carrot peelers is proving increasingly offensive to our late night viewers – hence the move to smut.”

According to Harris, recent media research indicates that most sensitive viewers are fast asleep by 2:30 in the morning anyway.

Commercial TV will launch its ‘Sextravaganza’ on Christmas Eve, with a premier screening of Killer Virgins.

– John Doe has enjoyed a long career as an executive assistant, working with a variety of major global brands in a clerical capacity. Long famed in the corporate sector for his legendary dictation skills, Doe has also gained acclaim for his incisive media journalism. Although queries have been raised as to the veracity of some of his information, Doe is adamant that he simply reports on media issues that he comes into contact with – his sources remain a closely guarded secret. Doe dismisses as ‘unsubstantiated’ and ‘possibly defamatory’ allegations that he is in fact one Andrew Miller of Unity Design.