Huffington Post publish 2010 nightmare story, then pulls it without explanation 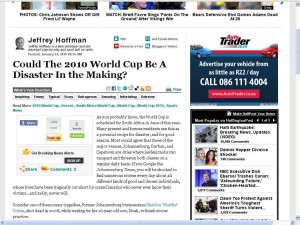 “Could The 2010 World Cup Be A Disaster In the Making?” (Posted: January 14, 2010 09:15 AM), thought better of it, and then pulled it from its website to the apparent surprise of the author. It can still be accessed at this URL but does not appear on a public list of stories attributed to Hoffman.

Hoffman subsequently tweets “Hold on…now I see that The Huffington Post has pulled my last blog. What is their problem? All I reported on is history…NOT my opinion!  3:43 PM Jan 15th” and “I need to find out what their issues are, if I am going to continue to try and offer them my best ideas regarding reality as we know it. 3:44 PM Jan 15th.” 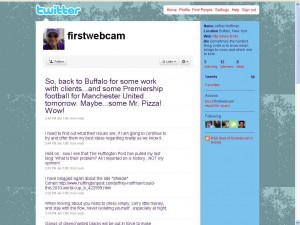 In his post Hoffman wrote that “Most would agree that three of the major venues, Johannesburg, Durban, and Capetown are cities where lawless mobs run rampant and threaten both classes on a regular daily basis.” Hoffman suggests Googling the Johannesburg Times for the endless tale of horror that in his opinion is South Africa. Of course no such paper exists. “If you Google the Johannesburg Times, you will be shocked to find numerous stories every day about all different kinds of good and decent individuals, whose lives have been tragically cut short by crazed lunatics who never ever know their victims…and sadly, never will,” he writes.

Why would The Huffington Post, which seems to employ and significant number of editorial staff, run a story so obviously based on, well, Google? Which references a non-existent newspaper? And then pull it from public access without an explanation to readers or the author? It speaks of poor editorial decision making and dubious journalistic ethics. Shame on one of my favorite reads.

11 Responses to “Huffington Post publish 2010 nightmare story, then pulls it without explanation”