The number of South Africans now online have risen to 4.5 million. This is the key finding of the Internet Access in South Africa 2008 study, released today by World Wide Worx. 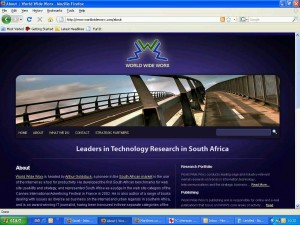 “The increase comes on the eve of the biggest shakeup in South African Internet access we’ve seen since the dawn of the commercial Internet in 1994,” says Arthur Goldstuck, MD of World Wide Worx. “It is only the beginning of a dramatic turnaround, and is occurring despite numerous obstacles in the way of growth.”

The Internet Access in SA 2008 report shows that growth has come largely on the back of dramatic take-up of broadband offerings by small businesses, which alone accounted for half of the growth in the market, mainly through connecting office staff to their ADSL links. At the same time, the market as a whole has seen a continued dramatic shift from dial-up connections to broadband, with growth in both ADSL and 3G at more than 50%.

“We are seeing a broadband culture emerging in South Africa, held back only by the restrictions still placed on data capacity,” says Goldstuck. “These should start becoming a non-issue from the middle of 2009, as the first of the major new undersea cables enters operation. At that point, dial-up will effectively be dead as a connectivity option – it is more expensive, and utterly inappropriate to the changing nature of the Internet.

“Once everyone who is connected is on broadband or high-speed networks, the Internet will come into its own as an environment for business collaboration and personal interaction.”