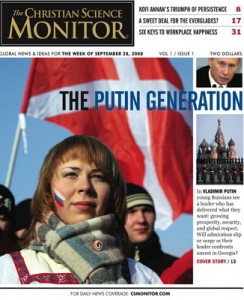 The 100 year old Christian Science Monitor will abandon its daily print edition next year in favour of its website and a weekly print title. “The Christian Science Monitor plans major changes in April 2009 that are expected to make it the first newspaper with a national audience to shift from a daily print format to an online publication that is updated continuously each day,” the newspaper announced today on its website. The newspaper has been awarded seven Pulitzer Prizes.

The move eliminates a major cost in production and distribution. The new daily electronic edition will be offered by subscription and sent to subscribers as a multipage PDF file.

The New York Times describes The Monitor as “the first national newspaper to largely give up on print.”