by Mxolisi G Buthelezi (@TheMxolisi) In her book, “Who’s Afraid of Affirmative Action”, Christine Qunta laments that, despite being in the majority, black people still find themselves in need of affirmative action in corporate South Africa. South African adland is no exception; it was only over 25 years ago that Herdbuoys became the “first black agency” in the country.

Admittedly, the industry has done some real work to recruit young black talent, especially in the last 10–15 years. This talent, though, is coming into the multinationals and locally owned, white-owned agencies — spare me the drivel about their BEE/BBBEE certificates. Any agency may exploit the legal loophole and get a group of stokvel mamas from Alex to be its BEE partner.

This regrettable reality was brought home to me by the attitude of a CMO from one of the leading FMCG companies, who — when challenged about the lily-white composition of its panel of multinational-owned agencies — said she’d actually brought the agencies’ BEE certificates to the meeting to brag about their BEE levels.

Twenty-five years into democracy, transformation can’t continue to be the sole responsibility of multinationals and white-owned agencies. Besides, they have a jaundiced view on the matter. What happened to all those young black kids who were brought into the industry through affirmative action (yes, I said it)? Without it, most wouldn’t even have set foot in those agencies. Surely today those bright lights should, like their white counterparts, be shining brighter at the helm of the industry? So why aren’t they playing a meaningful role in the industry?

The Bantu Affairs department during apartheid years created ‘suburbs’ in black townships to silence the noise from black professionals and the nouveau riche in those dark days. This was done with an effort to appease these ‘uppity’ blacks who knew their ‘rights’, spoke well and had some money.

The ad industry has learnt very well from this system. While black agencies, in the main, barely survive enough to even have a significant role to play in bringing about transformation, the industry ‘allows’ a few black-owned companies to ‘shine’ — so much so, when critical questions are asked about real transformation (not BEE-ed agencies), everyone quickly points to these three (yes, as in 1, 2, 3 agencies) to prove that the situation isn’t that bad. Really, you just have to work a little harder, that’s all.

“I mean, if these guys can make it, so can you, Mxolisi, my buddy,” says a multinational agency leader as he condescendingly pats my shoulder. He can’t understand why my agency couldn’t grow like those other three in all these years, 10 years to be exact… He doesn’t know about the 30+ that closed shop in the same period.

Did you know that black-owned media agencies, those I could find, don’t even bill R100m pa combined, yet one multinational media agency has been billing over R3bn pa for the past five years?

The question has to be asked: “Did BEE and the MAC Charter contribute to the demise of black-owned agencies?” The charter focuses more on transformation by multinationals and white agencies, with no obvious benefit for being a black-owned and -managed agency. Why? Don’t black-owned agencies have a role to play in further transforming the industry?

This was made glaringly clear to me when my agency joined the industry’s self-regulatory body, the Association for Communication and Advertising (ACA), about four years ago. I started serving on the board and found over 20 board members. Should you stumble into one of the board meetings of these captains of South African advertising industry, you’d be left impressed by the ostensibly high level of racial representation… until you realise that the majority represents multinationals and white-owned agencies.

When it comes to issues of transformation, it’s clear that we’re not reading from the same script, yet the message out there gives the impression that we are. Though I must be honest: after three years of lobbying my colleagues, we are moving forward and I’m proud of the willingness by most to find real solutions. It would make a huge difference if, for example, clients are actively encouraged to start looking at including black owner-managed SME agencies in their scope and pitches.

I was reminded of this when an ex-colleague, who happens to own a 100% black-owned media agency, called me the other day. He also serves on the board of one of the industry associations and, like me three years ago at my board, he’s the lone dissenting voice in meetings. I guess he was just making sure he hadn’t lost his marbles — and I identified deeply.

…To help change this situation. Recently, South African Tourism (SAT) tried. The contemplated 30% ‘forced marriage’ of large agencies with black-owned agencies was a brave attempt and it must be commended for this. The industry’s response to this was very telling — and disappointing. You just have to download the submitted bidders list and see who their 30% partners were. Most agencies deliberately went outside the industry to find these partners. I’m not even going to mention other ‘creative’ ways employed, mainly by large multinationals. Yinde lendlela esiyihambayo, kwasho u Madiba…

…Because they’re too busy trying to survive. When these young stars come into the industry, they have no choice but to assimilate into the multinationals and white-owned agencies. And I don’t blame them. That’s the reality out there.

I got my break at HerdBuoys as an intern before we even had BEE, and way before the pioneering black-owned agency merged with/bought into a multinational. The culture was different. I know this because I went on to work for multinational and local white-owned agencies. At this rate, I long for those ‘backward’ days before this BEE mess.

Maybe, just maybe, black agencies could also play a role in diversifying the industry at large. After all, isn’t this what clients and the industry preaches? 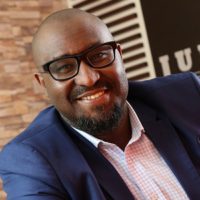 Mxolisi G Buthelezi (@TheMxolisi) is the founder/CEO of June15 Advertising and an ACA board member. He writes in his personal capacity.