by MarkLives (@marklives) This year, Design Indaba celebrates its 25th edition. A panel of agency and media execs who’ve been regular attendees tackle: What impact has Design Indaba had on the thinking, attitude and leadership of agency and marketing creatives and executives? Has it evolved and inspired you to research new ways of doing and thinking? Has it changed how you perceive the industry? Have there been any personal highlights, and where should the event pivot next — what can it do to add meaning to the industry and to one personally? Last up in our #BigQ panel is our very own Herman Manson. 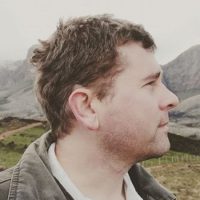 Herman Manson (@marklives) is the founder and editor of MarkLives.com. He’s attended and covered Design Indaba numerous times over the last two decades.

Keep smiling and wave might as well be the golden rule for influencers and a fist-full of hacks ‘covering’ industry events. If you offer a critique that even remotely approximates the real delegate experience, you’re bound to lose friends in low places, not get invited back (or anywhere, actually) and nobody will buy you drinks. Ever. Again.

Journalists have a complicated relationship with industry events. You’re a delegate and… you’re not. Your critique has to be honest, yet entertaining, and it’s very, very public, and often gets taken very, very personally. Respect to the Design Indaba team for having us back, year after year, in spite of our hopefully constructive but not uncritical reviews of the event. I can tell you, dear reader, that that truly is an outlier.

The (yes) iconic conference/festival dedicated to the creative economy is celebrating its 25th birthday this year in its home city of Cape Town. And, since it’s the 25th anniversary and you can read all the critical (but, ahem, constructive) criticisms elsewhere on this site, let’s focus on the lemonade, rather than the glitter pork (which does sound fabulous but Martha Stewart can make even that uncool).

I love that you can spend a (work) lifetime in this industry and that who inspires you will most likely not be the ‘rock-star’ names all industry events import from the US or Europe to draw in the crowds and headline the afternoon sessions but designers with an obvious fear of public speaking and decidedly not the Queen’s English yet who translate brilliantly — because they’re awesome, inspiring and innovative. It helps create a stage that’s truly global and surprisingly representative.

My favourite sessions tend to be those in which designers/artists/poets/writers (told you — surprisingly representative) reveal the processes they engage in to come up with creative solutions. They tend to look at what’s around them, what’s been known for generations and then apply their creativity to reinterpret or integrate these solutions to solve design problems. It tends to be simple but not at all obvious (until you see it in action).

Carla Fernandez, for example, works squares and rectangles into her fashion line, a celebration of local culture and skills that creates jobs for local women, honours local fashion, and simplifies production as this design requires less tailoring, so less skill and wastage. “Fernandez is saving a traditional craft by offering an incentive to a younger generation to learn it (by offering them employment),” I wrote in my 2014 overview of her talk in 2011. “Her take on the use of squares and rectangles in fashion speaks authentically of her homeland, yet translates effectively into modern fashion design.”

About the creative process

It’s not all about design; it’s about the creative process, too. In doing so, Design Indaba manages to differentiate itself properly from most of its competition — it’s definitely a large part of both its appeal and a reason for its influence. Take the 2014 talk by Lauren Beukes, author of “The Shining Girls”, in 2014, which centred on how we create stories to protect us from monsters (in this instance, violence against women) as self-defence mechanisms. She discussed the brutal murder of her friend, Thomokazi Zazayokwe, and the failure of communities and the justice system to bring her tormentor to book.

Another author, Ayse Birsel offered a 2017 talk about her book, “Design the Life You Love: A Step-by-Step Guide to Building a Meaningful Future”, which originated through her taking a moment to think about her own design-driven thought process.

Then there’s been architects Francis Kéré’s low-tech, community-orientated approach to architecture and Alejandro Aravena’s practical examples of how to effectively integrate newcomers into existing built environments, or Kenyan filmmaker, Wanuri Kahiu, whose film, “Rafiki”, was banned by a crassly homophobic Kenya Film Classification Board (KFCB) even as it was celebrated around the globe.

Power of perseverance and humility

And then there are moments — the late Hugh Masekela and trumpet in 2016 — where he quipped “I’m not a designer. I’m actually a design. My primary designers were my parents.” Or Archbishop Emeritus Desmond Tutu moving his chair around on stage in 2017 so he could view the choir, rather than sit with his back to them and not block the view of the audience. These are lessons in the power of perseverance and humility most designers would do well to be reminded off, even if it’s only once a year at a conference that celebrates them.