by Jason Stewart (@HaveYouHeard_SA) Since Instagram launched in October of 2010, it’s garnered over 1bn users. It’s changed dramatically, however; it’s no longer a space where you share photos with your friends but a public platform promoting your perfect life. This has resulted in the phenomenon we call 2-Selves, where people have two identities, one living in the real world and the other on social media… and a major influence on the Zeitgeist of Now.

For most people, social media is a slightly improved extension of their real selves but, for a significant portion of the user base, the combination of peer pressure, acceptance/conformity and constant comparison has caused a priority preference to place more value on their social self than their real self.

There’s a desperate need to control, curate and project the perfect image that will receive the instant gratification of positive affirmation from their adoring (yet critical) followers. This need has caused a creeping backlash to the perfection that Instagram is known for, spreading into areas where technology has allowed for the easy manipulation of beauty and aesthetics. We’ve been oversaturated with the overproduction of perfection to the point where we are craving the real, the raw unfiltered and flawed versions of life. One of the first brands to respond to this movement was Dove with its real beauty campaign. 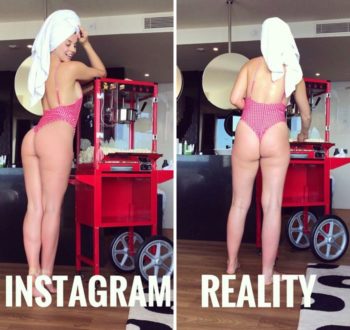 Another area where shift has been noted is that of parenting. Previously, ads focused on celebrating the calm, peaceful experience of parenting (any parent knows this isn’t true). Now, we’re seeing brands acknowledge the tiring, chaotic and difficult life to the relief and exuberance of a target market who finally feels heard.

This feeling of exuberance and relief is felt by the majority who’ve been inundated with a perfect complexion of the visual aesthetic every day in their newsfeed. This is why they’re responding to visual aesthetics that are ‘damaged’, as it feels better, more soulful, more natural, easier. It’s more interesting to look at, more stimulating to the mind, more distinctive and, therefore, more memorable.

Normcore is one of today’s most-influential fashion trends. At first people thought it was a joke yet now it’s seeped into the ideology of modern fashion trends — based on the premise of opting for clothes that are meant to be average — purposely unfashionable and purposefully blending in rather than standing out… and standing out because if it.

But so strong is the revulsion against perfection that we’re not only seeing a return to real but also the purposeful and extreme production of fake flaws and extreme ‘ugly’. Morphed, dark and scary evolutions of the human form are shown with design styles that are aimed at causing a sense of disgust. This search for the opposite of perfection also feeds our thirst for novelty, something that is more interesting and offers a refreshing alternative to the increasing shallowness of the last decade.

Need convincing? Just consider this: One of 2019’s most beautiful shoes is a sneaker that can only be described as a blend of both average and ugly.

We’ll never completely wipe out humanity’s instinctual love for symmetry, beauty and sex: the reasons that the likes of Instagram, the Kardashians and Matthew McConaughey will always be popular. Yet, because of this oversaturation and overproduction, we’re being driven to seek out anti-perfection. Flaws, boring and normal as they are, are all satisfying, relieving and interesting. It’s creating a new definition of beauty and cool. It’s a forced breakout of our instinctual nature.