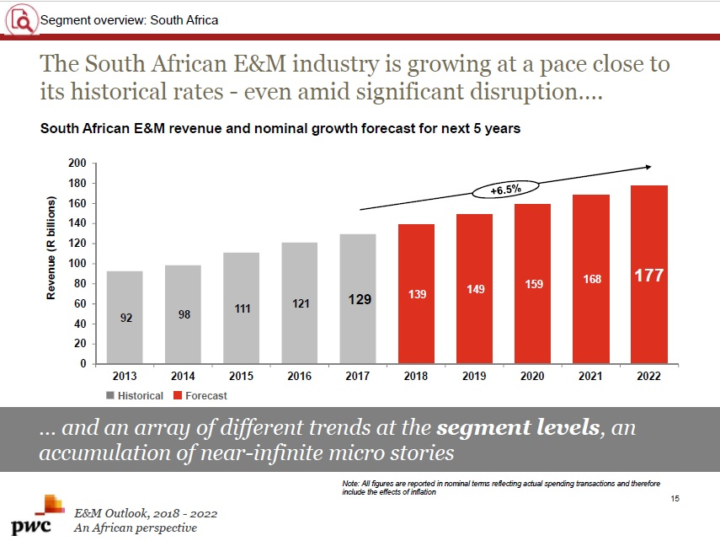 Says Vicki Myburgh, PwC Southern Africa entertainment and media Leader, “The pace of change isn’t going to let up anytime soon. New and emerging technologies, such as artificial intelligence and augmented reality, will continue to redefine the battleground. In an era when faith in many industries is at [an] historically low ebb and regulators are targeting media businesses’ use of data, the ability to build and sustain consumer trust is becoming a vital differentiator.”

The report shows that advertising in the E&M industry has been mostly affected by SA’s economic environment, with cautious growth of just 1.9% year on year. An improvement is expected to 2022, with a 3.3% CAGR bringing total advertising revenue to R41.5bn, from R35.3bn in 2017. New technologies and devices such as AI, VR and AR (virtual and augmented reality), voice-based smart home devices and virtual assistants look set to drive innovation in online advertising on a global scale in the coming years.

After a breakthrough year, SA’s total esports revenue is forecast to rise from R29m in 2017 to R104m in 2022, a CAGR of 29%. A host of high-profile events in 2017 helped to propel esport further towards the mainstream, and a number of similar events have been and are being held this year.

SA brands have to take a stand

The second iteration of WE Communication’s Brands in Motion 2018 research shows South Africans have higher expectations than their global counterparts, with consumers insisting on both ethics and innovation. WE South Africa’s Sarah Gooding Kobus gave Market Research Wrap her key insights for the local market.

Carried out among more than 25 000 consumers and B2B decision-makers across eight global markets, the survey covered eight categories, and 90 brands. One of the most-astonishing revelations is that even brands which are perceived to be highly innovative simply won’t make the grade anymore.

Major brand names such as SAP, KPMG, McKinsey and Steinhoff — institutions that would previously have been perceived as untouchable — have tumbled from grace in SA. The result is that citizens have radically transformed their views on the role of brands in society.

At the same time, the wildly fluctuating rand-dollar exchange is testament to the high degree of uncertainty, largely as a result of developments around land reform and growing concern in the midst of the China-US trade wars. It’s perhaps why the study shows that 65% of South Africans are looking to brands to provide stability in this climate of uncertainty.

When it comes to how brands handle important issues in this increasingly unstable climate, this expectation is even greater, with 87% of SA respondents indicating they expect brands to take a stand.

Sixty-three percent 63% of South Africans expect tech to help brands be more sustainable (16% more than the global average) and 72% expect brands to deliver an online experience that enables them to assess products and services, compared to the global average of just 52%. With an increasingly powerful middle class expanding its purchasing power, greater than ever numbers of South Africans are experiencing first-hand the ability of tech to transform their daily lives for the better.

Winning SA consumers over under the current operating conditions is a tough ask. The good news, however, is that by using clear insights around the forces driving customer perceptions, brands may begin to harness their motion in relation to these disruptive forces.

Automated internet traffic is on the rise, largely due to software programs called bots; although some facilitate data sharing and customer engagement, many are tools that malicious attackers use to break into apps, steal revenue, and expose intellectual property. According to a new Forrester report, bad-bot traffic is degrading app performance and corrupting data used to make critical customer engagement decisions.

Buy the full report at Forrester.