by Oresti Patricios (@orestaki) The year is almost done but, before you get there, a standing ovation, please, for the three best advertising campaigns of the year. The Odd Number, Joe Public and King James — it’s time to pop out the champagne and celebrate!

If you haven’t already seen Monday’s countdown from no. 10 to no. 4, view it now before we reveal the Top 3 ads. The winners’ list is drawn from the year’s Ad of the Week winners, and involved days of debate between the judges. 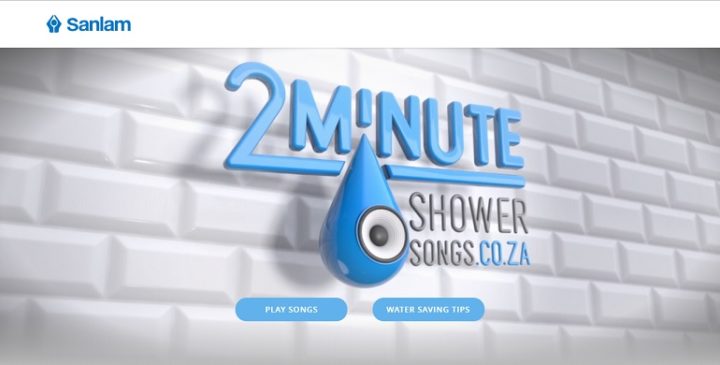 This campaign, sponsored by Sanlam in partnership with the City of Cape Town and Cape Town Tourism, has gotten top South African musicians to produce two-minute versions of their songs for people to sing along to in the shower. The idea is to encourage shorter showers, thus potentially saving thousands of litres of water in the drought-struck region. The campaign has even caught the attention of TIME, which featured it in the world/climate change section of the website in November 2017.

The campaign communicates a simple message, in a fun way, with a clear call to action. Even if people don’t go to the trouble of downloading the song, at least this will make them that much more aware of how they may help in a small way, every single day, by just keeping the shower short.

As South Africans we love to laugh at ourselves, and this was proven by many of the ads this year. SA’s fried-chicken outlet, Chicken Licken, has long competed with other purveyors of fast-food chicken by using humour in its marketing message.

Chicken Licken was featured as Ad of the Week three times this year, more than any other single brand. Its new agency as of mid-2016, Joe Public United, featured seven times this year, also more than any other agency. So, it’s not surprising that one of these — and its first ad for Chicken Licken, nogal — made it to the second spot: the funny, fantastical story of Rodwell Tshabalala, hero of the African Space Programme, directed by Pete Pohorsky of Plank Film Productions.

The campaign extended into other media, getting the public to weigh in on who it was who could have stolen the crispy chicken en route to the space station. Out of this world!

#1: Inspired By My Constitution by The Odd Number for Brand South Africa

Brand SA took a huge risk by telling stories set in some of the ‘darker’ aspects of SA culture. But, ultimately, it all paid off, with powerful ads that speak of optimism and human rights, thanks to our progressive constitution.

One mini-documentary featured a young man from the Cape Flats, an area renowned for gang violence, which is a major contributor to Cape Town’s ranking as SA’s ‘murder capital’, and one of the world’s most-dangerous cities. Through a series of quick-cut montages and narration that suggests a more-sinister path, the viewer is surprised to find that the lead character, Imraan Christian, is not buying a gun — his ‘shooting’ is with a cine camera as he documents life in the ‘hood’.

In fact, Christian is a real-life hero who has spearheaded several initiatives to assist children at school and end gang violence. This young activist is someone who will be an ambassador and example for the youth of Cape Town in a long-term, sustainable way.

A second mini-documentary is about a Malawian hip hop artist who, despite experiencing the effects of xenophobia, has faith that our constitution will protect his rights.

The power in these documentaries directed by Anthony Bila of The Rudeboy Collective is #InspiredByMyConstitution. The South African Constitution has been recognised as one of the world’s most progressive. It is the anchor that allows all South Africans to depend on their basic human rights, equality, freedom and justice.

For its production values, honesty and powerful message, this campaign is our Ad of the Year for 2017. May it herald a great 2018, not only for the advertising community, but for everyone proud to call South Africa home.

For cracking the Top 10, shout outs for making our list twice to director Ross Garrett of Darling; production company Darling itself; post-production houses The Upstair Ludus and Left for making our shortlist twice; and composer Markus Wormstorm for making it three times. [If we have left anyone out due to incomplete credits, please let us know — ed-at-large.]